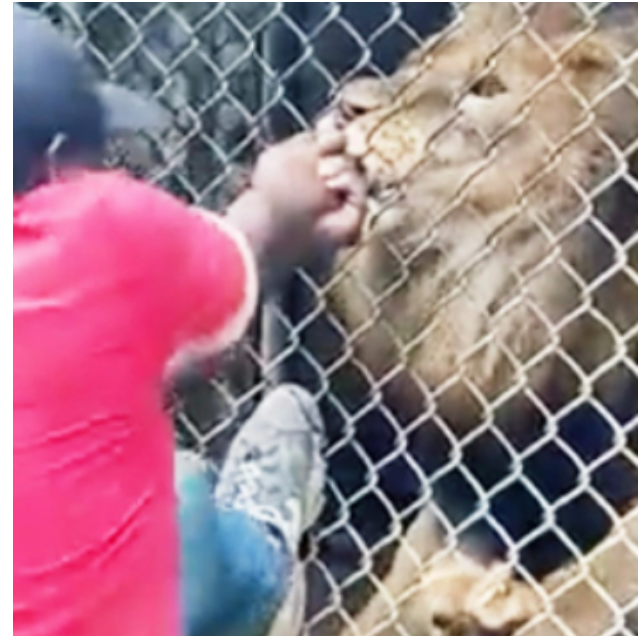 Lion bites off finger of a zoo keeper as tourist films it with a phone camera.

The incident happened at a zoo based in St Elizabeth, in Jamaica and has long gone viral on social media.

Clip of the video shows the man lost part of his right ring finger in the terrifying incident which occurred at approximately 4:22pm on Friday.

The Zoo keeper had put his hand through the cage housing the lion while trying to pet it.

ALSO READ: How To Register Your Crypto Business In Nigeria Under SEC’s Rules

A tweep who posted another video of another keeper teasing the lions noted that it was a way the zoo keepers try to make the lions roar.

In one of the videos, a female zoo keeper can be seen teasing the lions while one of then tried to bit her fingers.

Idk … I feel like if a lion is not roaring, you should not force it to roar? 😂. A everyday u feel like talk? https://t.co/6PFyaHGpda

However, in the case of the unlucky male zoo keeper, one of the lions trapped his middle finger and bit-hold to it.

After a couple of attempts to pet the lion, the huge animal slams its jaw shut, trapping the mans fingers inside.

He had asked the tourists if they were ready to see the lion roar.

When they said yes, the man began poking the lion.

After several attempts at poking the lion, the animal eventually caught-hold of his finger between its jaws and held on to it.

Meanwhile, the man can be seen trying to desperately pull his finger from the lion’s mouth.

When he finally managed to free his hand, his middle finger was gone.

The Jamaica Observer Online reported that the lion partially bit off the man’s right ring finger.

One witness told the Jamaica Observer Online they thought the incident was a joke.

“When it happened, I thought it was a joke,” one woman who didn’t want to be named said.

“I didn’t realise the seriousness of it, because it’s their job to put on a show.

“Obviously, when he fell on the ground everybody realised that it was serious. Everybody started to panic.

“The entire skin and about the first joint of his finger was gone.

“I ran away from the whole thing, because me nuh like see blood and it was too graphic for me.”

According to local media reports, the man got up and walked to a vehicle before leaving the popular attraction.

The zoo, which is located close to Lacovia, west of Santa Cruz, has a wide range of animals including llama, zebras, monkeys, crocodiles and toucans.

The zoo has issued a statement in response to the viral video.

“The actions displayed in a video by a contractor of Jamaica Zoo is tragic.”

It said the incident “do not represent the safety procedures and polices that must be adhered to at all times at Jamaica Zoo.”

“We are currently reviewing the video, with a view of preventing any future recurrences.

“It is an unfortunate event that should never have happened.

“…we, the family of Jamaica Zoo, are doing everything to assist the gentleman in moving forward.”

How To Free Up Space On My Smartphone