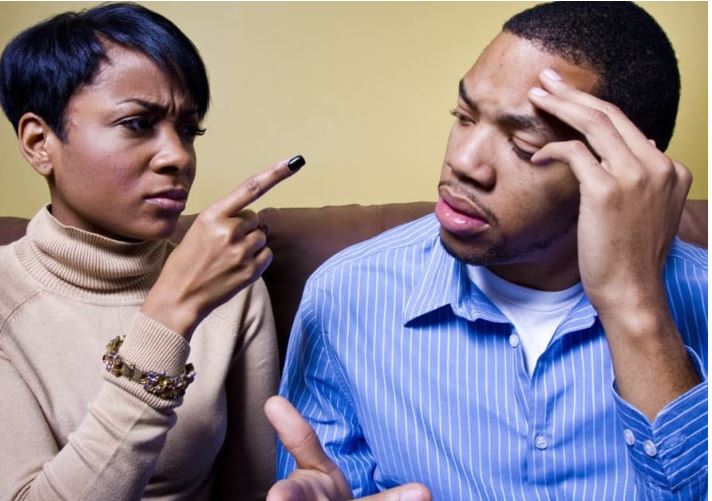 This report, 25 Signs Your Girlfriend Or Wife Is Abusive, will show you red flags you need to know about abusive girlfriends or wives.

We would list the first 15 signs and discuss the remaining 10 signs.

The first 15 signs are equally self explanatory.

Meanwhile, though there is often more of an emphasis put on abusive husbands in the media, the truth is that a wife can be just as abusive.

Men are even less likely to seek help than their female counterparts because of the stigma attached to both abuse in general and being an abused man.

If you are concerned that you might have an abusive wife (partner, fiance or girlfriend) here are ten signs that you should look for:

The first 15 signs are listed as  follows:

15 Signs of a Physically Abusive Girlfriend or Wife

Women use a variety of methods to physically abuse their partners:

The other 10 signs include:

Not all abuse is physical. In fact, abuse is far more likely to be psychological—but that doesn’t make it any less dangerous or any less serious.

An abusive girlfriend or wife is going to be controlling.

She will take control of your life, assuming control of the money, who you spend time with (including whether or not you see your family) and even what you eat and drink.

This control does not have to be overt.

The silent treatment and body language can be an effective way to control another person without having to even say a word.

Even if she is not strong enough to cause you any serious physical injury, physical violence is still a sign of an abusive wife.

It is not about the damage that she does, but rather about the intent to harm.

If your wife is violent, she is an abusive wife.

Punching, slapping, hitting, kicking, and shoving are all signs of an abusive personality.

This physical violence might extend beyond just you to your children or pets.

Not all jealousy is necessarily abusive, but when she takes her jealousy to extremes, it can be a sign of an abusive relationship.

There are generally two different types of jealousy, and you might see signs of both. The first is jealousy of you.

The second type of jealousy is jealousy that she is not always the center of attention.

If she cannot stand to let anyone else have even a little bit of the spotlight, especially if they (or you) deserve the spotlight, this is a sign of abuse.

An abuser will try to separate you from your friends and family.

They want to be the only person in your life and they will do whatever it takes to prevent you from hanging out with your friends, seeing your coworkers outside of work, or visiting your family.

An abusive wife will do this for two reasons: first, she does not want someone else to see the abuse and second, they would rather that you be unhappy than have even a sliver of fun with someone who is not her.

Words hurt, often just as much and even more than fists.

An abusive wife is more likely to use verbal abuse than physical abuse, but will often engage in both.

If you feel that you are always walking on eggshells around her or trying to avoid making her angry or as if you can never guess what is going to set her off, these are signs of abuse.

Other signs of abuse include being threatened or continuously demoralized.

Nothing that she does is ever wrong.

She will never take responsibility for the things that she does and she will not suffer the consequences.

When something goes wrong, it is because someone else, probably you, has done something wrong.

Even when a reasonable person could see that she is in the wrong, she will find a way to blame you.

This is a term taken from the classic movie called “Gaslight,” in which a husband tries to manipulate his wife into believing she is crazy in order to have her institutionalized.

An abusive wife might engage in this behavior to minimize her abuse, making you believe that you are just imagining that things are as bad as they really are.

If you find yourself questioning reality and unsure of what is true, it might be a result of being gaslighted by your spouse.

No one loves being criticized, but when criticism comes from a place of love and is presented in a construction manner, it can be helpful for the other person to hear.

If your wife cannot handle being told that she is doing something wrong or that she is hurting you;

If she is more than capable of giving criticism, especially harsh criticism, but cannot take it any way, shape, or form, it is probably because she is an abusive wife.

When you get upset, it is because you are too sensitive.

When you make a small mistake, she makes you feel like you’ve done something horrible and that there is no way you could ever fully apologize for what you’ve done.

You are never worthy of forgiveness.

She has completely unreasonable expectations for you and how you should treat her, especially when she seems to go out of her way to treat you poorly.

An abusive wife will intimidate you, make you feel like you should be scared.

She will also manipulate you and aim to control you.

If you are afraid of her and what she might do to you, it is time to approach someone outside of your marriage for help.

Talking with a therapist can provide validation that your situation is not okay.

It can also requires attention, at the very least helping you find safety.

It can also help you learn ways to care and protect yourself.

Abuse, no matter who it is from, is never okay and should be addressed.

A therapist can help you weigh various pros and cons and create a safety plan to protect yourself.

11% Domestic Violence Are Committed By Girlfriends Against Boyfriends – Study