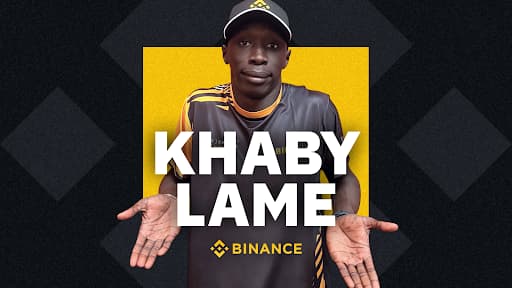 Khaby Lame might be the literal hot deal. He had his first Vidcon and emerged as the most followed TikTok account over Charli D’Amelio in one month. And a few days ago, the 22 years old  Italian-Senegalese silent comedian signed a partnership with the world’s digital currency selling and buying platform, Binance, for people to adopt cryptocurrency and Web 3.

Interestingly this is coming after the company had also signed football star Cristiano Ronaldo to introduce Web3 space through NFT. In a tweet announcement, the star mentioned that the partnership was set to change the NFT game.

According to the CEO of Binance, the TikTok star was selected as he was the most followed on the video-sharing platform and was good at explaining things in a simple way. He added that this would be perfect for the platform.

Currently, Khaby has 145.5 million followers on TikTok and over 78 million on Instagram. He will be using his content style to simplify cryptocurrency and Web 3 space, debunking every misconception of people.

Already, he has posted a video on these platforms, informing people about his partnership with Binance. In his video, he appears as a superhero ready to save people starting their journey in cryptocurrency and Web3.

Having trouble starting your Web3journey? I want to introduce you @Binance Superhero!Tag your friends who need #binanceman too 🤲🏿#web3 #learnfromkhaby #keepitsimple #NFA #ad Not trading advice. See website for riskwarnings.

However, this is coming at a time when there has been a diminish in space.

Several cryptocurrencies have crashed during this period, and those who have invested in the past lost their money. Also, the prices of some other digital currencies have dropped, meaning many people will take out their money from crypto platforms.

Many people are nervous about crypto platforms, and encouraging people to trust them might not look good.

Although, this didn’t discourage the young star from taking the opportunity. According to him, the partnership is in line with what he usually does, making things easier and simpler. Also, in the past, he has taken an interest in understanding Web 3. So, this is a good opportunity for him to know more about the space. He also mentioned that this was a new challenge and exciting content to share with his followers as he considers them family.

On this note, some of his fans have reacted excitedly to the partnership on his social platforms.

In his journey to fame, the Italy-based TikToker started reacting to complicated videos with silent videos. Using the Stitch and duet video on TikTok, he makes videos doing the same things more simple. In his videos, after he does something more straightforward, he opens his palms in a way to showcase ” see, done it”.

Also, Binance’s partnership with Lame will include creating a Non-Fungible Token (NFT) collection. This would be a significant addition to the already viral video maker as he signed alongside a top soccer player.

Demystifying Misconception About The Tech Space