Twitter has just launched Birdwatch, its latest attempt to fight misinformation while making use of a crowd-sourced effort.

According to the social networking giant, the latest development doubles as a community forum where users can register to become a “misinformation police.”

Announced on Monday evening, the community-driven feature is the social networking giant’s latest approach to tackling misinformation and disinformation on the site.

More so, such community member can add notes that provide helpful context; thus making reference to a trusted source for clarity.

“We believe this approach has the potential to respond quickly when misleading information spreads, adding context that people trust and find valuable,” Keith Coleman, Twitter’s VP of product, said in the blog post.

Although the project is new, it isn’t entirely strange; as it was spotted by industry expert – Matt Navarra –  back in October 2020.

Any guesses what it does? pic.twitter.com/1vmpZdTKLi

Then, Matt who barely had any clue on what the feature was all about took to his Twitter page to disclose that the Birdwatch allows users to “attach notes to a tweet.”

Subsequently, Twitter who then spoke to a known source revealed that it was another approach it was exploring to address misinformation on the site.

Twitter has in recent times taken a more aggressive approach to fight misinformation on the platform.

In the past, the platform relied on its team to manually remove tweets that are misleading on the platform.

Recall that during the wild outbreak of the deadly coronavirus in the first quarter of 2020; Twitter began removing ‘misleading and potentially harmful content’ about COVID.

Twitter subsequently introduced ‘labels’ to attach to tweets containing unfounded conspiracies about the origins of the virus and fake cures.

With that proven to be helpful, Twitter disclosed about two weeks to the US election that it has successfully labelled at least 300,000 tweets for ‘dispute and potentially misleading’ content.

Now, Twitter wants to crowd-source effort to end misinformation on the platform.

Being a pilot program, Twitter through its support page called out for interested people (potential Birdwatchers) to test the new feature in the US.

With the test set to be carried out only in the US, Twitter users outside the US will not be able to view any note added by a community member.

Even as such, users who reside in the US will also have to visit a dedicated page – birdwatch.twitter.com – to view added notes.

Although twitter claimed the feature will be available to a small group of people at the initial stage, it will also add more applicants over time.

After applying (which you can do by click this link), approved Birdwatch contributors will be opportune to select misleading tweets, and add their own notes. 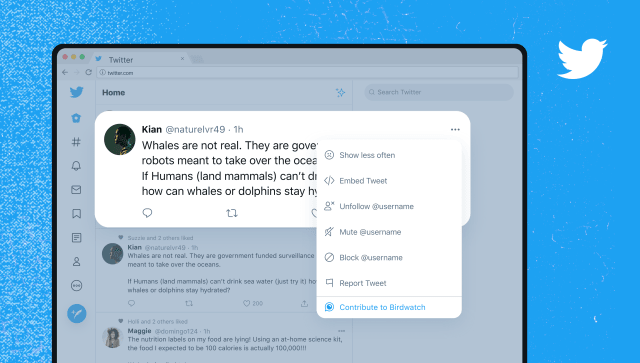 Twitter disclosed that unlike its fact-checking tools, Birdwatch is a way of adding context to posts.

Although the difference between fact-checking tools and the Birdwatch isn’t very elaborate; participants or Birdwatchers will be able to annotate a seemingly misleading tweet regardless of the account holder.

Also, Birdwatchers have the option to cite sources in their annotation to further add relevancy to their contrary opinion.

Like most pilot programs, Birdwatch is sure to come across peculiar challenges such as human manipulation among other things.

Having acknowledged that the pilot might be ‘messy and have problems at times’; Twitter believes ‘this is a model worth trying.’

“We know there are a number of challenges toward building a community-driven system like this,” Coleman said.

“We will be focusing on these things throughout the pilot.”

Although the latest approach by Twitter is a laudable one, it is perceived differently by Twitter users; majority of which think this is another attempt geared towards censorship.

In another scenario,  some think the new feature can instead be weaponized as it can be manipulated to do otherwise.

ALSO READ: Twitter Calls For Help In Its New Approach To Verification

It explained in its blog post that it is heavily focused on such a potential threat.

“We know there are a number of challenges toward building a community-driven system like this — from making it resistant to manipulation attempts to ensuring it isn’t dominated by a simple majority or biased based on its distribution of contributors. We’ll be focused on these things throughout the pilot,” Coleman wrote.

Among other concerns, below are some mixed reactions from Twitter about the new feature:

Ppl will be stripping each other of their 1st amendment rights w out even noticing it 😂 I’m sure a lot of these “birdwatchers” will be bots hired by Twitter too 👀. Especially when it comes to Covid, anything that goes against the mainstream (aka TRUTH) will be censored, watch.

Lol, really? So if birdwatchers deem information coming from the left is “Misinformation” . Those responsible for tweeting will be suspended? Bahhhhh ha haaaaa. Yeeeah right..

.@Twitter's new feature to help combat misinformation to be called 'Birdwatch' and uses the same philosophy of upvoting/downvoting false info claims, but limited to birdwatchers selected by Twitter. Wonder how Twitter will stop it from getting gamed?https://t.co/gSpsNmfmFk

Wow I can’t believe they are even trying such a solution. It’s like we can’t fact check one statement so let’s attach thousands of other opinions to it which again we can’t check. Soon there needs to be a birdwatch of the birdwatchers.

..by the time the birdwatchers 1) notice 2) add a note, 3) achieve consensus that a note is helpful (aka the truth putting its pants on), the harmful tweet will have travelled halfway around the world

I have seen several Tweets that Twitter should hire more moderators instead. But the moderation capabilities of birdwatchers are very limited. They can't suspend users. While testing, the notes aren't even visible on Twitter. Birdwatch has no impact on the visibility of Tweets.

who will watch the birdwatchers?

Get Bug Fixes And Other Features With The New Apple Update