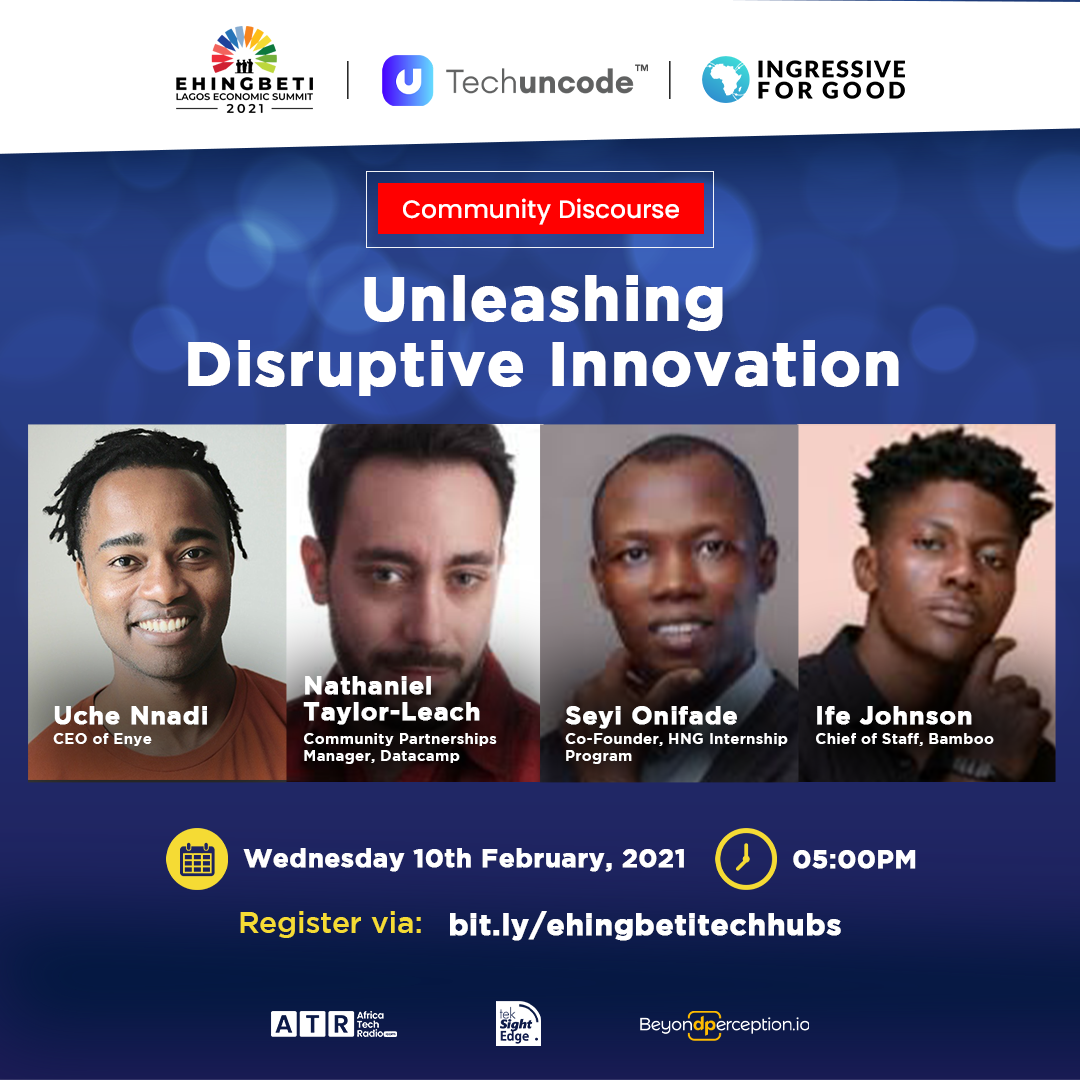 Lagos State will be holding its 8th edition of Ehingbeti Economic Summit in less than a week, and this year’s own will be held virtually.

In the coming days, ahead of the event scheduled to hold between 16th and 18th of February, the Lagos State government wants to organize a preparatory Hub activation for interested participants.

The hub activation series which also doubles as a platform where youths and young adults can address and collaboratively engage key arising matters in the society will be split into 8 series.

These series will, however, be hosted virtually by different tech communities and hubs across the State, allowing interested persons to join from their respective location.

Also, the series will feature seasoned speakers from different fields and works of life who are set to impact the audience significantly.

Themed “Unleashing Disruptive Innovation for Development”, this particular series will be hosted virtually by I4G on Friday, 12th of February, 2021.

The event will kick at 10am prompt and will span through noon. Click this link to register

Supported by corporate entities including Nigeria leading technology platform Techuncode, Africa Tech Radio (ATR), Teksightedge Ltd., and Beyond Perception; the activation series promises to be an interesting one.

Also in the meantime, you can follow this link to sign up and reserve a seat at the forthcoming LASG Ehingbeti Economic Summit 2021.

Ingressive for Good (I4G) exists to equip young Africans in need with tech skills to help them impact and contribute to the development of Africa, socially and economically. Ingressive For Good (I4G) was created to address the glaring inequities that exist within African tech ecosystems.

The annual Lagos State Economic Summit, popularly called EHINGBETI started in 2000. The summit began as an annual event and because of the importance attached to the Summit and its resolutions, it has changed from an annual Summit to a biennial Summit in order to give some time for Government to respond to commitments that she made. However, the summit was last held in 2014.

The Summit itself has a rich history and it is of even greater pleasure to note that it has been hosted continuously since the beginning of the millennium in the year 2000, and is now firmly established as a credible forum for the stimulation of economic growth in Lagos State.

From its early life as a diagnostic Summit; its evolution into an implementing one; the number of resolutions it has committed to and the impressive number that it has implemented – 109 implemented out of 119 resolutions at the last count; Ehingbeti has survived from Government to Government and provides an excellent example of consistency in government policy.

The forthcoming Ehingbeti summit slated for February 16-18, 2021 has been tagged “For A Greater Lagos: Setting the Tone for the Next Decade. The speakers for this year’s summit are: Babajide Sanwo-olu (Governor of Lagos state), Dr. Obafemi Hamzat (Deputy Governor of Lagos State), Senator Ben Murray-Bruce (Founder of Silverbird Group) and Dr. Ngozi Okonjo-Iweala (Former Minister of Finance).

Because of the current situation in the country, this year’s Summit is designed to hold virtually and has an estimated projection of over 100,000 participants. The three objectives of the Summit according to the Special Adviser to the Governor on SDG, Sholape Hammond are as follows: