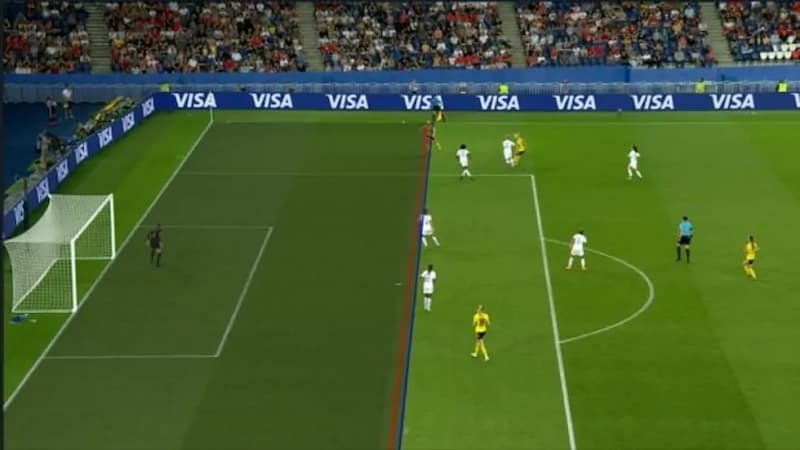 In this report, FIFA Introduces limb-tracking Technology To Catch Offside Players, you will read the following.

…What is offside in soccer?

…What is VAR technology?

…Why FIFA is introducing the technology:

…What is semi-automatic offside technology?

…How the semi-automatic offside technology works:

FIFA has said it is introducing a limb-tracking technology to help officials catch offside players.

FIFA said it will test the technology at the FIFA Arab Cup which starts Today, Tuesday 30th August, 2021.

The FIFA Arab Cup is taking place in Qatar, the same host nation as the 2022 World Cup.

What is semi-automatic offside technology?

It is a technology that involves installing a video camera setup on the roof of the stadium.

The cameras then work with software that helps them detect and process offside players during football matches.

What is offside in soccer?

In football, offside is when a player gets a ball pass with fewer than two opposing players (usually including the goalkeeper) between them and the goal line.

If a player scores a goal while offside, the referee usually cancels the goal.

However, accurately detecting when a player is offside is usually difficult in real time.

This made the FIFA body to introduce the Video Assistant Referee (VAR).

However, instead of VAR to resolve this challenge, it has added to the controversy.

What is VAR technology?

The Video Assistant Referee (VAR) is a technology that uses television cameras to monitor players during football matches.

VAR collects data by analyzing video feeds of the game.

It draws lines on the pitch to confirm whether players are offside.

It then recommends a decision and sends the data to the referee in the pitch for final decision.

However, decisions from VAR are usually controversial.

So, for a match that is so interesting, viewers have to wait to know if a goal is valid or not before the match continues.

Also, VAR’s footages most times lack the resolution or the frame rate to determine the exact moment the ball leaves a player’s foot.

According to Cracktechnology.com, this becomes an issue,

Why FIFA is introducing the technology:

Before and after introducing the VAR in football, decisions about offside remains the most controversial.

VAR’s television cameras have not been accurate enough to determine exactly when the ball has left the foot of a player completely.

This has always placed doubt on whether a system could determine offsides automatically.

Due to this challenge, referees have been having issues making the right decisions about offside.

Consequently, some referees have ruled out goals by the smallest margins.

For example, in 2019, Liverpool’s player, Roberto Firmino, made a strike against Aston Villa, but the referee ruled out the goal because his armpit was offside.

How the semi-automatic offside technology works:

FIFA will install between 10 and 12 cameras on the roof of the stadium.

It links the cameras to the processing software that helps them detect, process and interpret offside players.

The semi-automatic offside technology tracks players’ limbs to detect whether they’re in an offside position or not.

The video cameras and the software extract limb data by taking precision video recordings of the players during matches.

Also, the video cameras collect up to 29 data points at 50 times per second and 3000 times per minute for every player.

They focus on two points:

The moment a player kicks the ball, the cameras take recordings, process and interpret the data.

It detects if it is the defender or attacker that is closest to the goaline.

So for offside, the officials  analyze the position of the players as well as their involvement in the play.

Meanwhile, after extracting and processing the limb data from the video, the technology sends data as alert to the match officials in the operating room.

Then, the officials calculate the offside line in real time, ie, while the match is going on.

After this stage, the technology passes the baton to the Video Assistant Referee (VAR) to continue verification.

The Video Assistant Referee (VAR) receives the data from the limb-tracking technology.

It then validates and confirms the offside offense.

After validating and confirming the offside, the VAR informs the referee on the pitch about the decision.

It informs the referee in the pitch if it is an offside or not.

Speaking on the reasons for the technology, Pierluigi Collina, the current FIFA Refereeing Director, said thus:

“VAR has had a very positive impact in football and the number of major mistakes is reduced, but there are areas where it can be improved – and offside is one of them.”

“We are aware the process to check offsides can take longer [than other decisions], especially when it is very tight. We are also aware that the positioning of the lines may not be 100% accurate.

“For this reason Fifa is developing a technology which could offer faster and more accurate answers. This is known as semi-automated offside.

“For offside the decision is taken after analysing the position of players, but also their involvement in play. Technology can draw a line but the assessment remains in the referee’s hands. This remains crucial.”

Also in a statement, FIFA Director of Football Technology and Innovation, Johannes Holzmuller, said “It is based on limb-tracking technology,”

He noted that, “The limb tracking data extracted from the video will be sent to the operating rooms, and the calculated offside line and detected kick point will be provided to the replay operator almost at real time.”

“The replay operator then has the opportunity to immediately display it to the VAR room.”

Although the technology can help detect offside with exactitude, it only ends up as suggestions as the referee retains the absolute decision to decide if its offside or not.

The referee makes assessment of the alerts from the technology and decides.

Also, the technology will help in faster detection and decision making as regards offside during plays.

This fill further instill trust in the decisions concerning if a goal is objectively valid or not.