Google is rolling out an updated Chrome mobile browser with a new interface for its Android users.

As spotted online, the new update also comes with a new tab grouping feature that allows users to properly manage their web pages.

While the new update has been around since the release of version 88 of Chrome in January, it is yet to go live for all users.

However, there are hints that the wider expansion is set to take place before the end of February.

That been said, the new layout which is currently limited to Android devices is a major drift from what was available before.

Unlike when users had to surf between different pages in a vertical layout, the new update makes use of a grid-based layout for tabs.

With the new development, about six tabs are shown on-screen simultaneously, with each tab much smaller than before.

However, the small nature of the favicon allows users to glance more pages at a time unlike with the vertical layout.

According to the tech giant, this update will add more enthusiasm and convenience to web browsing.

It is also important to note that the feature has been made available on Chrome for iOS for a while now, hence the isolated update for Android.

How to use Google Chrome new grid layout for Android

Currently, the new layout is available on some Android devices which are already using Chrome.

While we await the wider release across every eligible device, below is a guide that can help you use the new feature efficiently.

Firstly, you need to update to the latest Chrome version.

In the event that you are still unable to access the new layout then you may be required to activate the layout manually.

How to disable the tab grouping feature on Chrome

Although the new update on mobile chrome browser for Android is a laudable one, not everyone may be excited about it.

Some users might be willing to turn off the feature, and rather stick with the old layout.

To achieve this, here is a simple guide that you can follow in order to turn-off the tab grouping feature (Grid-based view); 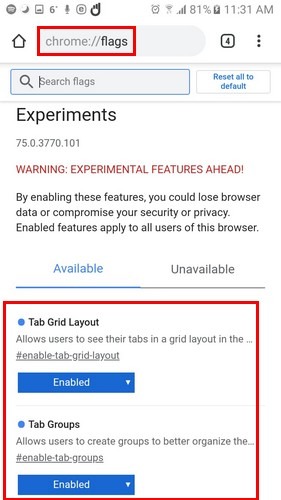 In the meantime, what do you think about the new Chrome mobile browser outlook? Kindly share your thought in the comment section below.

Despite A 21% Revenue Dip, Airtel Records Win In Q3

Government Stops Usage Of Smartphones In Primary And Middle School