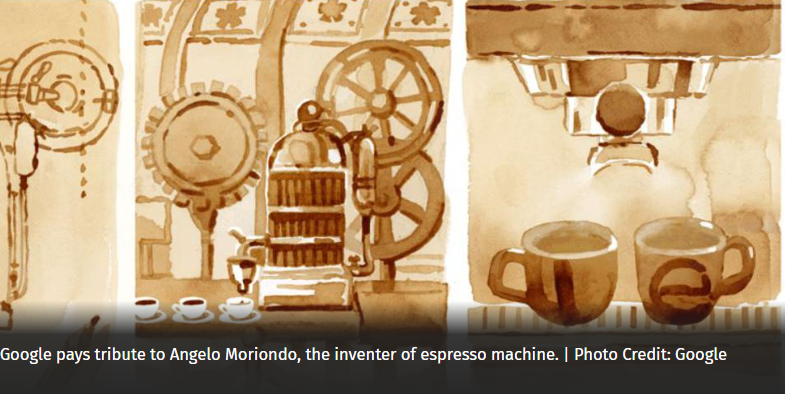 Google is celebrating the 171st birthday of the godfather of espresso machines, Angelo Moriondo.

Google invited all lovers of Coffee to join in celebrating the Angelo Moriondo, the Italian inventor who first patented the first ever espresso machine.

Coffee lovers can sip in tribute to the inventor.

Olivia When created the doodle honouring the inventor. When painted the Doodle in coffee colour and features a GIF of the espresso machine.

What is Google Doodle:

Google Doodle is a special, temporary alteration of the logo on Google’s homepages to commemorate special events.

Who painted the Doodle:

According to the company, When painted Monday’s doodle using different shades of real coffee.

Meanwhile, Moriondo was born in Turin on June 6, 1851, meaning today is the 171st anniversary of his birth.

Why Moriondo invented the coffee machine:

In those days, coffee was very popular in Italy.

In fact, people would spend a lot of time waiting for the coffee to brew.

This wasted a ot of people’s time, all in the name of taking coffee.

However, Moriondo came to the rescue of the customers and figured that making multiple cups of coffee at once would allow him to serve more customers at a faster pace.

According to Google, in a blogpost, the inventor’s invention gave him an edge over his competitors.

“The machine consisted of a large boiler that pushed heated water through a bed of coffee grounds.

Also, the machine had a second boiler producing steam that would flash the bed of coffee and complete the brew.”

He had enlisted a mechanic to build the espresso machine and directly supervised it.

Moriondo presented his espresso machine at the General Expo of Turin in 1884.

During the presentation, he got a bronze medal for his invention.

Also, He received a patent, “New steam machinery for the economic and instantaneous confection of coffee beverage, method.”

Similarly, Moriondo’s father would later build the popular chocolate company, “Moriondo and Gariglio” alongside his brother and cousin.

Moreover, Moriondo later bought the Grand-Hotel Ligure in Turin and the American Bar in the Galleria Nazionale in Roma.

After patenting his invention, Moriondo  continued to refine his creation down the years.

However, poor branding gave his business a big blow.

Also, his invention soon became obscure as a result of poor branding.

Many bpeople soon would not use his machine as there were never any “Moriondo” machines anywhere.

Equally, according to Smithsonian magazine, there were no verifiable machines that he used which are still in existence.

The magazine added that there aren’t even any photographs of Moriondo’s invention.

Moriondo’s coffee machine was later improved by Luigi Bezerra and Desiderio Pavoni, who introduced features like a portafilter and several brew heads.