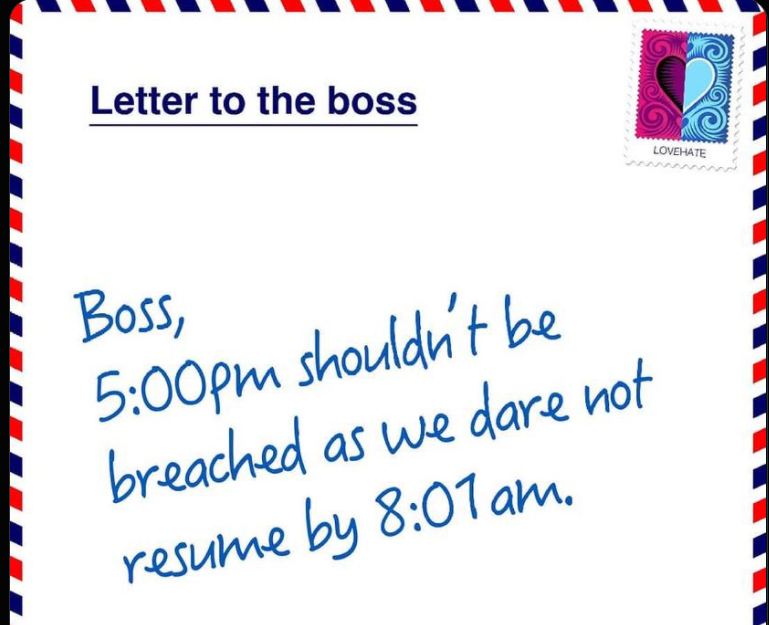 There is no gainsaying the fact that #horriblebosses and #Toxicworkplaces abound in Nigeria.

In fact, majority of the work places as well as bosses in Nigeria are toxic and horrible!

They have greatly affected, among others, the mental health of employees.

Also, because of this unhealthy systems at work places, majority of Nigerian employees no longer have work-life balance.

Consequently, we find situations whereby there are mass resignations at some companies.

In the opinion of a business developer, Taiye, most Nigerian CEOs had their education abroad and so, think that they are too smart.

He said these CEOs with foreign education come back to Nigeria and treat Nigerian employees as rags because they think they are doing the employees a favour by offering them jobs to beat poverty.

Of course, the rate of unemployment in Nigeria is alarming.

A recent report by Statista says that in 2022, the unemployment rate in Nigeria is estimated to reach 33 percent.

Take for instance, imagine your boss sending you work-related mails after office hours!

Imagine you have to terminate your outing with your family just to get back at work even during weekends or after office hours.

Many employees have either received work-related mails at very odd hours such as between 5pm and 7am.

Similarly, many employees have faced punishments or even unfairly sacked by their bosses over minute issues.

“I beg him and he forfeited that month salary.

“2 month later I got a bigger offer and he beg to me to stay. Omo I japa without resignation letter.”

However, another tweep, odutuyo seun with handle, @sheunsoft, countered this by saying it was unprofessional.

“If its a company you built with ur sweat,would u be happy if someone crucial to your company takes 2week for burial,also if ur 2weeks is out of ur annual work leave that is fine bt if its not I must be blunt with you,its unprofessional,if everyone took 2weeks company will foldup.

Currently, the popular conversation in Nigeria right now is centered on these two issues: #Horriblebosses and #ToxicWorkplaces.

Many Nigerians have taken to the social media to call out some companies, especially tech companies they believe are culprits of #horribblebosses and #ToxicWorkplaces.

Tweeps decried the toxic nature of work places as well as the inhumane treatments employees get from their bosses.

Here are what they are saying:

For Jemima, @JemimaOsunde, she said: “People are really suffering. It’s so sad. All I can think about is how depressing it must be. Drive in traffic to work, get to work and be treated like dirt, drive back home in traffic and repeat the next day.”

Similarly, Miriam Omale, @omale_miriam tweets saying, “Horrible toxic bosses will deal with you and still remind you that there are no jobs out there. @A_sshee … Shall we begin??”
Also, describing his experience, a tweep, H.T with handle, @Htajons said thus:
“We don’t even have townhall nor staff meeting where I work, whatever d management say is what we must do, u can’t say no or u loose ur job, we did try to come together so we could be heard and they divided us and fired some of us, so d rest we get in line.”

Similarly, another tweep, ToxicBossSpotter, @SpillTheBeef, narrated saying, “Over 50 resignations in Media fuse in less than 6months. That says a lot.

“The HR is so unprofessional, even goes as far as begging applicants to buy her a drink before she gives them their employment letter.

Although some bosses have been called out, as well as gotten ‘punished’ for allegedly making work toxic foe employees, they too have something to say.

So, here’s my humble advice:
– Acknowledge your flaws
– Make amends to past & current employees.
– Enrol in an anger management programme
– Be accountable, via executive coaching
– Learn team building

Many employees have proffered solutions to this issues. In fact, they are fighting back using various means.

For jus.tiana, @tianaStarrrr, employees should ditch their #horriblebosses’ mails after working hours.
She said, “Do not take your bosses calls on a weekend and after your work hours are over. Read that again!”

Another tweep, I’M INTENTIONAL!, @Enkaynjama18 suggests employees should inform new employs of the nature of work places and bosses before hand.

She said, “They will be asking for guarantors from prospective employees, what is my own guarantee?

“If you worked somewhere and another person calls to ask you about work culture before they get in, please be open as possible.

“Once upon a time, I was a data analyst for one of the biggest FMCG in Nigeria in the Jos office.

“My Naija Boss a Benin and I had good understanding, his target was getting the job done.

“He can call me 2am, I will wake up and send him some docs, I can come to office anytime next day without any problem.

“Later, my Indian boss wants the same energy but wants me in office by 8am.

“If we wanna work let’s work, if we want to roll on office chairs let’s do it.”

For Ɖ₳₮ ₳Ɉ ɃØƗ with handle, @darestlesspen, he simply told his boss he doesn’t pick work-related calls after working hours.

He said,” During NYSC my principal called me around 6am I ended the call got to office he was yelling I told him I’m a married man I don’t pick cals outside work hours.”

“Even if you are a start-up founder eager to produce results or a manager with a deadline,

They have emotions and self worth. You pay them doesn’t qualify you to insult them. Agree?”

Reacting to the #HorribleBosses and #ToxicWorkspaces conversation, the Chartered Institute of Personnel Management of Nigeria (CIPM) mulls activating measures against unfair labour practices in Nigeria.

President of CIPM, Olusegun Mojeed, said “It is high time we re-strategised.

“We need to throw our heart into the matter by being hyper-responsive to people issues. People cannot be kept quiet for ever.

“They are no longer willing to suffer in silence.

“I’m positive that the goodwill and the emotional currency would go a long way in showcasing our stance that we abhor oppression and unfair labour practices.

As much as we condemn horrible bosses and toxic workspace, people must keep in mind that these bosses are in business.

Also, people must keep in mind that no boss actually wants their workspaces to be toxic nor do they intentionally become horrible.

Also, no boss would want a dead workspace devoid of liveliness.

So, how should employees act in a toxic workspace with horrible bosses?

According to a tweep, Nyolins with handle, @onyeomaawolo, employees should do the following:

1. They should identify the cause of the Toxicity.
2. They should choose a Representative of two or three to seek audience with the Employer.
3. The audience should be about discussion the issues.
4. Employees should negotiate how best to have a conducive and productive workspace and working hours.
5. parties must be reasonable, compromising and have a common goal of making it work for the company.

Similarly, another tweep, Wólҽ Ógundarҽ™ with handle, @WoleOgundare, suggested that employers should periodically conduct behavioral analysis of their staff members.

He recommends three approaches as immediate solutions to these issues of #HorribbleBosses and #ToxicWorkspaces, viz:

“For every single establishment, either called out or still ‘surviving-in-hiding’, there are ways to re-navigate, mend your #toxic ways and create that productive workforce you’ve always desired.

“There are 3 things that I’d recommend immediately:

1. Check the stress levels within your establishment.

2. Use results from 1. to review and or create a positive and practical culture.

3. Carry out an organization-wide behavioural analysis to Understand the behavioural profiles of all staff members.

The analysis will also be to learn how to manage those behavioural profiles.

Meanwhile, some advocate having a complaint website that documents reviews about companies with #toxicworkplaces and #Horriblebosses.

According to Elder Seun, @iamseunalaofin;

“It’s time we have a website where people can search for reviews to know if a company has #HorribleBosses and #toxicworkplaces.

“Searching for job is a trauma already, no one deserves to finally get a job and it’s hell.”

Infinix Smart 6 is here with Full View and Full Power