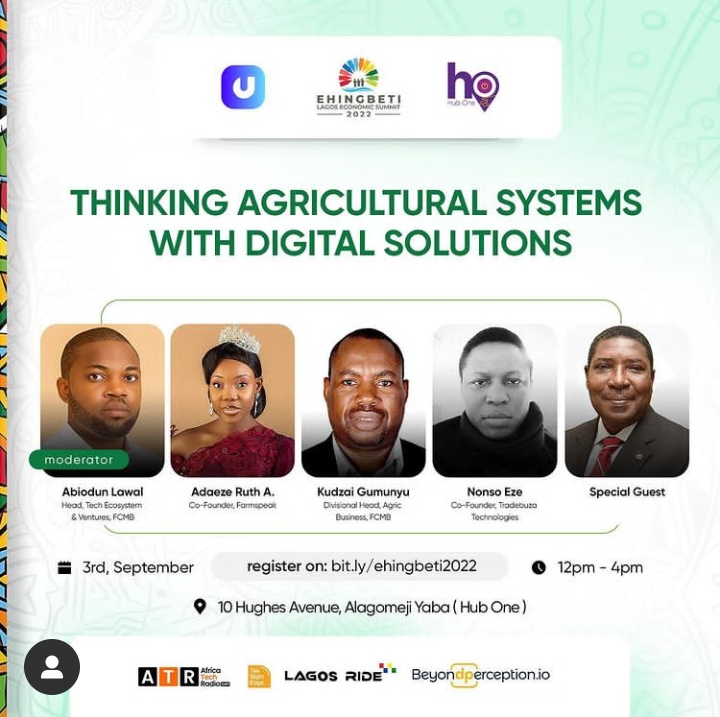 Experts in agriculture, technology, economy, media and other sectors have suggested smart ways to make agriculture attractive to youths.

They noted that the integration of tech as well as the digitalization of the various agricultural processes is what will attract more youths to agriculture.

They spoke during a hub activation discourse themed, “Forward-thinking Agricultural Systems with Digital Solutions.” It was organised by Techuncode and Hub One as part of the series of events to usher in the 2022 Lagos state economic summit called Ehingbeti.

Meanwhile, among the seasoned experts who shared their great wealth of knowledge in the sector includes the Co-Founder, Farmspeak, Adaeze Ruth Akpagbula; and Co-Founder, Tradebuza Technologies, Nonso Eze.

Others are Kudzai Gumunyu, Divisional Head, Agric Business at First City Monument Bank (FCMB). among many others.

The event was moderated by Abiodun Lawal, Head, of Tech Ecosystem and Ventures at FCMB.

Over 100 people participated in the event both physically and virtually.

According to the experts, agriculture remains the under-tapped sector with the solutions to the problem of youth unemployment.

However, they lamented that the Agric sector in Nigeria is plagued by many challenges, which are not limited to lack of funding, lack of lands for farming, poor motivation to engage in agriculture, food and farm insecurity, natural disasters as well as digital illiteracy by the farmers.

They also said that another great challenge of the sector is the lack of interest in agriculture by the youths, a situation that has seen the elderly who are not tech savvy dominate the agricultural sector.

This results in too many subsistence farming methods that do not guarantee food security and sustenance.

According to Ruth, the agricultural sector in Nigeria needs more technological equipment so that the sector can comfortably feed the teaming population in Nigeria.

She said, “we [the Agriculture sector is] are  feeding over 200 million people in Nigeria yet, we have only less than 10, 000 tractors.”

Meanwhile, speaking on the issue of the unavailability of lands for agriculture in Lagos, the experts suggested a review of the Lagos State Land Use Act for agricultural development.

According to them, the Lagos state government should review the Land Use Act to allow more access to lands, specifically for agricultural purposes.

This, they said, would bring more development in the sector as it will further make agriculture attractive to, especially the youths.

According to them, the Agric sector in Nigeria is plagued by many challenges which include lack of funding, lack of lands for farming, poor motivation to engage in agriculture as well as digital illiteracy.

She said with the review of the land use act, more lands will be available for agriculture.

According to her,  “the digital literacy of farmers is low hence, we need to better sensitize farmers to digital solutions and technologies. Also, they need access to funding, Infrastructures.”

She further noted that “people don’t have an understanding of the agric value chain. Production shouldn’t be the only value chain of agriculture.

“People, especially young ones, need to be educated on how they can be keyed into the agric value chain.”

She suggested smart solutions to the agricultural problems among which are that the government should develop farm cities or settlements to boost agricultural growth in Lagos.

Dr Oluwarotimi Fashola, the Special Adviser, Agriculture, to governor Babajide Sanwo-Olu, was present at the event.

During the discourse, he made several revelations about the Lagos state government’s plans toward solving the food problem usually associated with a mega city like Lagos.

One of the many things he revealed was that the state has developed many farm settlements as well as provided funding and training programmes to attract more youths to agriculture as well as make food available for the people.

Speaking on the need to secure both farmers and their farm produce, the special adviser said the government takes proactive measures to ensure that insecurity is not only predicted but also they are nipped right in the bud.

Dr Fashola said the state has invested hugely in rice projects as well as vegetables and other food crops to ensure that Lagosians have enough food.

However, he noted that the people and private entities must put their hands on deck to ensure that the developmental strides being recorded in the state’s agricultural sector are sustained.

According to him, ‘The government cannot guarantee continuity in the sector alone.”

He said continuity is important to be able to implement and sustain the developments that the government has begun.

He also noted that “sustainability has to be in the hands of the private sector and the young ones.”

Meanwhile, he revealed that the state has integrated modern technology in solving the problems of land and other agricultural challenges such as funding.

According to him, there is a need for e-mapping of farmlands as well as digitizing survey plans.

He said doing these will make it easier for farmers to access funds for agriculture.

He was represented by Daniel Olorunseyi.

According to him, digitizing agriculture is one of the major ways of achieving developments in the sector.

He said, sometimes, farmers fail to get funding for agriculture because they have not integrated technology into their agricultural processes.

He, however, urged the government to empower more farmers through the provision of funding.

Specifically, he called for the review of the Land Use Act to support agricultural growth in the state.

Similarly, the Co-Founder, of Tradebuza Technologies, Mr Nonso Eze harped on the need to integrate smart technology to scale agriculture.

He spoke on the solutions to the various problems facing the agric sector, especially in Lagos state.

He said there is a need to build solutions that can make farming simple and easier for farmers.

According to him, the process of farming being digitalized can enable scaling for farmers in the state.

Hub One is the place to be for visionaries and disruptors taking giant strides in shaping tomorrow.

FCMB owns Hub One, and the Hub and Virtual Communities are being managed by Leadspace Shared Facilities Limited and Passion Incubator.

We have engaged several tech entrepreneurs in the tech ecosystem. Our portfolio companies are across several sectors, from Education Tech, Fintech, Insure Tech, and Agric-Tech.