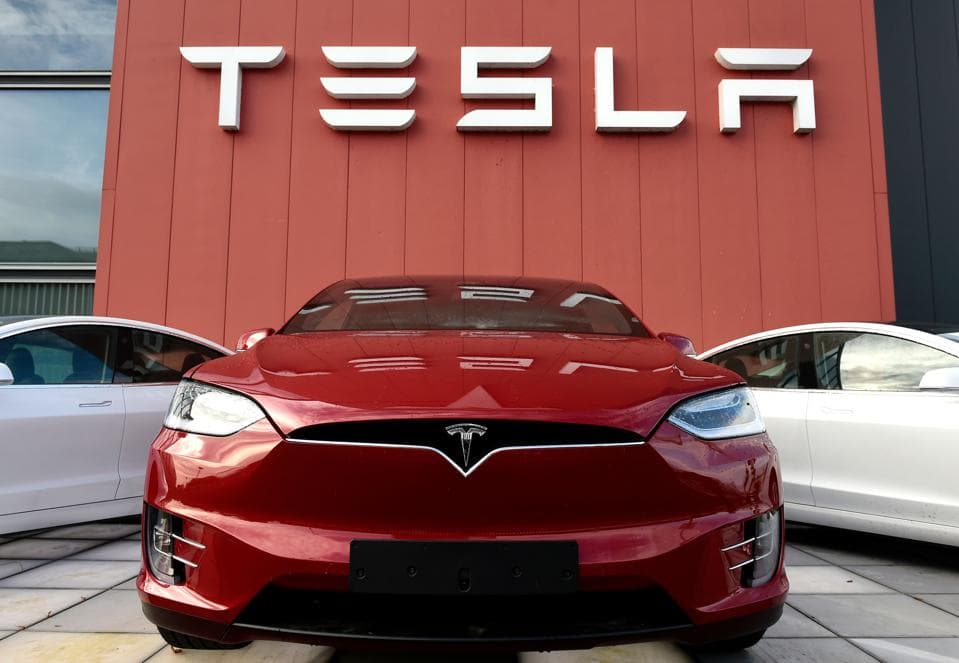 Tesla has hit $1 Trillion mark in market value for the first time after a rental company, Hertz ordered 100,000 Tesla vehicles.

Tesla’s stock market value has been rising since 2020 and into 2021 as investors swooped in on electric cars following government proposed bans on petrol and diesel cars.

The US electric car pioneers shares rose up to 9% to a value of $998 on Monday after Hertz announced the order.

The order took Tesla’s market cap to $1 trillion briefly before it dropped below that level.

A report by the Guardian said shares must trade above $995.75 to stay above the $1tn (£727bn) level, based on the number of shares disclosed in its latest filing.

Tesla joins the tech companies Apple, Amazon, Alphabet, Facebook and Microsoft among the US firms who have passed the trillion-dollar mark.

Apple became the first company to reach the landmark in 2018.

It came after a record quarter for Tesla in which its Model 3 became the bestselling car across Europe in September. It was the first time a battery electric vehicle had topped the monthly sales charts in the region.

Hertz said the cars would be delivered by the end of 2022 as part of its plan to build the largest electric vehicle rental fleet in North America. However, the firm did not detail how it would fund the purchase, which will likely run to as much as $4bn even with a bulk discount.

Hertz filed for bankruptcy only last year, and the Tesla announcement was accompanied by a new advertising campaign featuring Tom Brady, the veteran American football quarterback.

The rise in Tesla’s share price added further to the fortune of its chief executive, Elon Musk. His net worth was already well over $252bn before Monday’s gains – almost $60bn more than Amazon founder, Jeff Bezos, the world’s richest man behind the Tesla boss and the founder of the space rocket company Blue Origin, a rival to Musk’s SpaceX.

Monday’s valuation milestone came despite it being forced to withdraw a software update for its autonomous driving capabilities over the weekend. Musk tweeted on Sunday that the company was rolling back to a previous version, but on Monday he said it would issue a new update.

Tesla sold 24,600 Model 3 cars in Europe during September, taking a 2.6% market share that meant it outperformed established internal combustion engine models such as Renault’s Clio or Volkswagen’s Golf, according to figures collated by Jato Dynamics, an automotive data company.

The Model 3 may not sustain its chart-topping position because Tesla has previously pushed imports at the end of the quarter. Nevertheless, it represents another milestone in the car industry as it prepares for the end of petrol and diesel sales within the next decade in some markets. That includes a 2035 ban on all internal combustion engines in the UK, where the Model 3 is already the most popular electric vehicle.

Petrol sales still dominate across Europe because of the lack of affordable battery electric vehicles, but there has been a big switch away from diesel because of scandals related to air quality. Before the coronavirus pandemic, there were 10.3 new diesel cars registered for every electric or plug-in hybrid vehicle, but that ratio has decreased to only 1.3, Jato said.

Tesla last week recorded record quarterly sales as well as record profits of $1.6bn. The success of Model 3 sales and its Model Y crossover meant that Tesla was the biggest seller of battery electric vehicles in Europe in September.

Tesla’s European battery crown is likely to be challenged by Germany’s Volkswagen and Stellantis, the French-Italian combination of Peugeot and Fiat Chrysler.

Tesla’s ascent to the top spot – also the first time that any non-European model has achieved the distinction – coincided with falling sales among many of its traditional rivals, which are struggling to get hold of computer chips amid a protracted global shortage. The crisis has hurt carmakers around the world, although Tesla has got around some of the problems by rewriting software so that it can use available chips.

Culled from The Guardian