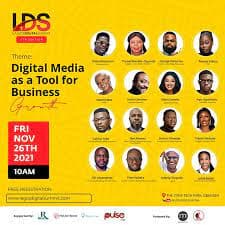 The Lagos Digital summit, which was held on the 26th of November, was indeed splendid.

Top tiers in the entertainment, fintech, business, digital and many other industries were fully represented as the event.

It was mind-blowing for many attendees both online and physically as they heard these speakers highlight the theme ” Digital media as a business tool”.

Dividing the summit into two sessions: the entertainment and business session emerged.

Some of the represented personnel in the entertainment space made appalling revelations on their journey.

Macaroni, popular for his comical short video skits on social media, spoke on how digital media helped him create content.

He spoke on how there were various personalities online, and it helped him develop several characters for his skit.

He also spoke on how digital media has made him reach the world and communicate who he is.

The most relatable of all revelations from Macaroni was when he mentioned, ” i got into comedy out of frustration”.

Another appalling revelation from the entertainment space was Naomi Mac, the fourth runner up of the voice Nigeria 2021.

She revealed how, leveraging digital media like her social platform, she could upscale her finances and talent.

Also, “intentionality” on these platforms helped her grow her audience and get deals from brands.

Compared to her first TV appearance on the Nigeria idols, Naomi had grown tremendously through intentionality on her platforms.

Tolani Baj spoke on how she made her “boss” move as she moved from the US to Nigeria.

She opened up on how her family were against the move, but she did with her resilient spirit.

Opening a YouTube channel, she started her journey as a YouTuber helping those in the diaspora looking to move back to Nigeria.

This was her first entrance into Nigeria’s media space, she mentioned.

After being on the Big Brother Naija platform, she leveraged the popularity that came with it and kept her name on the mind of people.

This not only boosted Tolani Baj as a brand but also influenced her YouTube channel.

Using digital media, he held a YouTube live teaching people about being a voiceover artist.

This was also one of his lockdown highlights during the Covid-19 period.

As a filmmaker, Imoh highlights how digital platforms have exposed him to other top tiers in the film industry.

And how this has helped him in partnering with some of these people.

Our thought on this

It is clear that the world has further embraced digitalization. And it would be touching down on every industry as years go by.

Programs like the Lagos Digital Summit enlightens people on these changes.

And make people, especially the young ones, jump on the trend not to miss out on the ongoing development.

The summit has been held for five years, and many more will come up as there is a need to enrich more people on the changes.