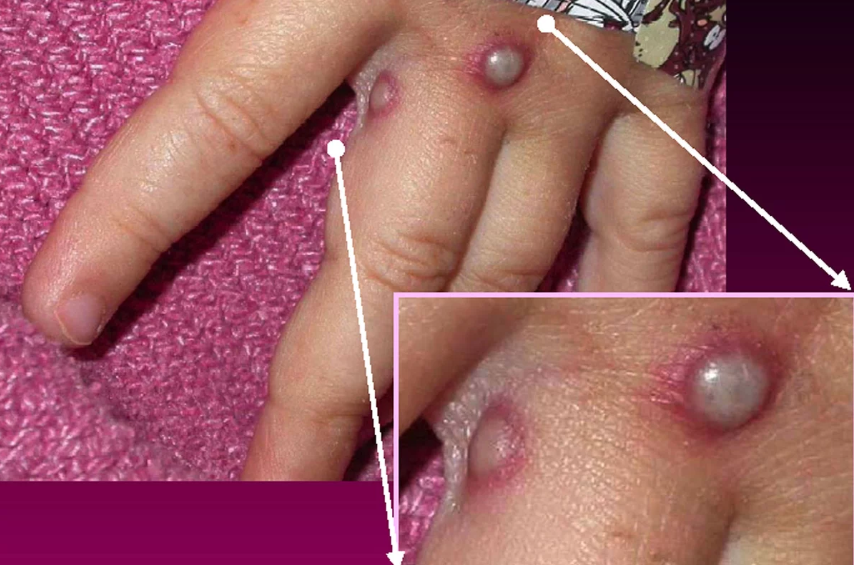 South Africa has reported its first case of the Monkeypox virus, joining the league of countries with the virus.

Meanwhile, Europe is at the centre of the monkeypox virus outbreak.

Since May, more than 3000 individuals from several European countries, the United States, Canada, Australia, Morocco and the United Arab Emirates have reported the case.

Therefore, this report will discuss the modes which the Monkeypox spreads as well as the symptoms and possible cure.

Panic has stricken South Africans over the detection of the first case of the Monkeypox virus in the country.

Like many cases in Europe, the South African case of Monkeypox involves a patient who has no travel history.

ALSO READ: Monkeypox Outbreak: What’s It And How Do People Contract It

He said the patient is from Johannesburg.

Phaahla said health authorities are still working to establish how the man contracted the virus.

Meanwhile, the health minister urged South Africans not to panic, saying the virus is not airborne like Covid-19.

According to him, “The disease only spreads through close droplets, so you cannot get it by being in the same room with an infected person.”

“It’s not a very severe illness.

“It is not spread simply by being in the environment where there might be somebody with the disease.

“There has to be actual contact with a person who is infected,” Phaahla said.

Continuing, he said: “I can assure South Africans that this is not a novel virus which has never been seen before.

“Its characteristics are well known even in countries where there are high numbers.

“It has not changed in terms of its character and severity.”

Similarly, the National Institute for Communicable Diseases (NICD) said it has commenced contact tracing to identify any additional linking cases of monkeypox in South Africa.

So, what is this disease that is becoming a global concern and how do people contract the Monkeypox virus?

Also, where do people contract it?

Monkeypox is is a virus that causes illness that no one wants to have.

It springs out and spreads uniform lesions on your body.

Also, it occurs through different stages which includes bringing out chickenpox or syphilis on your body.

Why its called Monkeypox:

People began calling the virus Monkeypox in 1958 during its first documented cases when two outbreaks occurred in colonies of monkeys kept for research.

According to the European Center For Disease Prevention and Control, ECDC, although monkeys first showed the virus, they are not major carriers.

In fact, the virus likely persists in squirrels, pouched rats, dormice or another rodent.

So, watch those rats, squirrels and other animals closely.

The pox is a painful, fluid-filled blisters on the face, hands and feet.

It equally causes rash to develop on your body.

This often begins on the face, and then spreads to other parts of the body, including the genitals.

Monkeypox may get healed within few weeks, say two or more.

However, one version of monkeypox is quite deadly and kills up to 10% of people infected.

Mortality is higher among children and young adults.

It is also higher among immunocompromised individuals.

Also, the version currently in England is milder as its fatality rate is less than 1%. A case generally resolves in two to four weeks.

So, where do people get this Monkeypox virus?

Where do people get Monkeypox virus?

There is serious concern that the virus may be spreading through the community — undetected — and possibly through a new route of transmission.

According to Susan Hopkins, as seen on www.cracktechnology.com, epidemiologist and chief medical adviser of the U.K. Health Security Agency (UKHSA), “This [outbreak] is rare and unusual.”

Although reports claim that more cases of the virus emanate from monkeys in Africa, the cases in England, Portugal and the Spain are not from Africa.

In fact, the victims have never had contact with anybody from Africa with the virus nor have they visited Africa over a long period of time.

Similarly, the case in South Africa has no travel history.

So, how did they get the virus? Also, what mode of transmission could they have gotten the Monkeypox virus?

The Monkeypox disease is a virus and so, it can be transmitted to human too human.

Generally, Monkeypox transmission to humans can occur through contact with an infected animal or human.

You can also get the virus through contact with human bodily material containing the virus.

Transmission between humans mostly occurs through large respiratory droplets like when someone coughs or sneezes.

When an infected person sneezes or coughs, the droplets travel but not far.

So, prolonged face-to-face contact is a most common way.

However, the trend with those infected lately may suggest another mode of Monkeypox transmission.

Take for instance, the UK Health Security Agency (UKHSA), on 7 May, reported the first case in the UK.

Also, On 14 May 2022, it reported two more cases between two people living in the same household.

Similarly, the agency detected another four cases on 16 May.

Surprisingly, none of the cases have had contact with the first case.

But one discovery about the cases is that all of them are men and they all have confirmed they engage in homosexuality.

Meanwhile, Techuncode had reported that in Portugal, five persons had the virus while 20 others were suspected cases.

Equally, the case in the U.S., the patient in Massachusetts had not recently traveled to countries where the disease occurs.

However, the patient visited Canada.

Surprisingly too, almost all the cases involve mem having sex with men (MSM).
All the cases reported a preponderance of lesions in the genital area.

Given the unusually high frequency of human-to-human transmission observed in this event, transmission between sexual partners, due to intimate contact during sex with infectious skin lesions, seems the likely mode of transmission among MSM.

So, could this be a new way of Monkeypox transmission?

“What is even more bizarre is finding cases that appear to have acquired the infection via sexual contact,” epidemiologist Mateo Prochazka at the UKHSA tweeted.

“This is a novel route of transmission that will have implications for outbreak response and control.”

“We are particularly urging men who are gay and bisexual to be aware of any unusual rashes or lesions and to contact a sexual health service without delay,” epidemiologist Hopkins said in the UKHSA’s statement.

How can Monkeypox be cured?

Well, there is no current proven, safe treatment for monkeypox virus infection.

However, according to the Centers for Disease Control and Prevention (CDC), some medications can help control the virus.

Control includes use of smallpox vaccine.

Others are antivirals and vaccinia immune globulin (VIG).

Brave, The Search Engine That Allows You Customize Your Searches