Tesla, an American-based electric car and energy company, hits the limelight in the car industry as it produced and delivered half a million cars in 2020.

In 2020, we produced and delivered half a million cars. Huge thanks to all those who made this possible.https://t.co/q43vz6RMhd

According to a press release, the company said that the recent achievement was in line with their recent guidance. 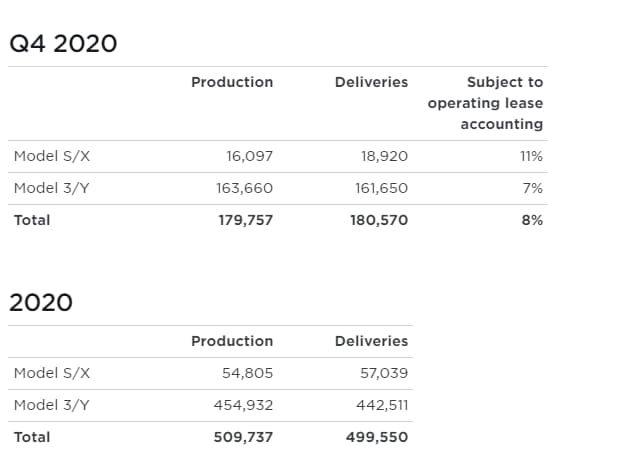 However, it said that its net income and financial statement will be publicised along with the rest of its financial performance during its Q4 earnings.

It added that with its conservative system, a delivery count occurs when it has successfully delivered a car to its owner, and the paperwork is creditable.

‘Sales not an indicator of financial statement’

Although its vehicle delivery stands as only a section of its financial performance; Tesla said it should not be an indicator of the quarterly financial statement.

The financial statement result will depend on several factors which some include costs of sales, foreign exchange movement, and a mix of directly leased vehicles.

It also included a forward-looking statement regarding the timing of incoming vehicle deliveries.

“Statements herein regarding the timing of future vehicle deliveries are “forward-looking statements” based on management’s current expectations and that are subject to risks and uncertainties,” Tesla said.

However, it concluded that various important factors could cause the actual results to differ materially.

The company applauded its customers, employees, suppliers, and other contributors who contributed to the great achievement.

The company announced that Model Y, one of their ongoing productions in Shanghai, will be going out shortly.

In a related development, electric car sales in Norway account for over half of car purchases; the first country in the world to reach the benchmark.