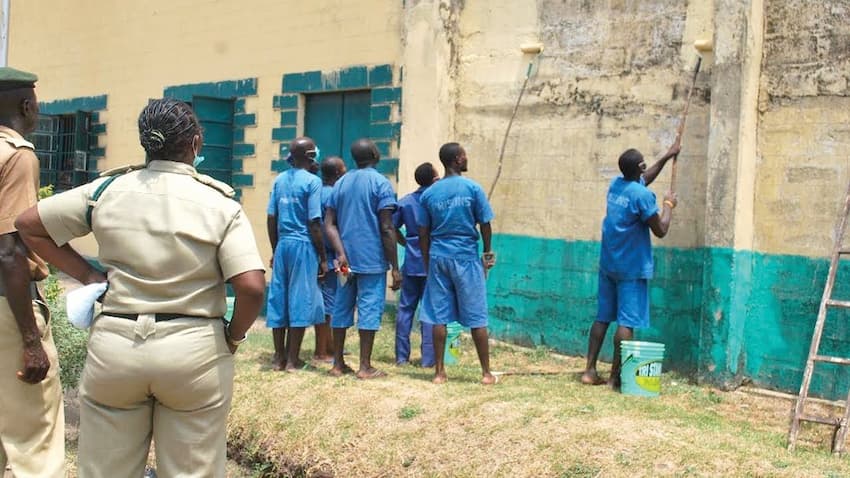 There have been at least 20 prison breaks under President Muhammadu Buhari as against seven jail breaks during the former president Goodluck Jonathan.

During the former president Jonathan’s government, prisons in the following states were attacked: 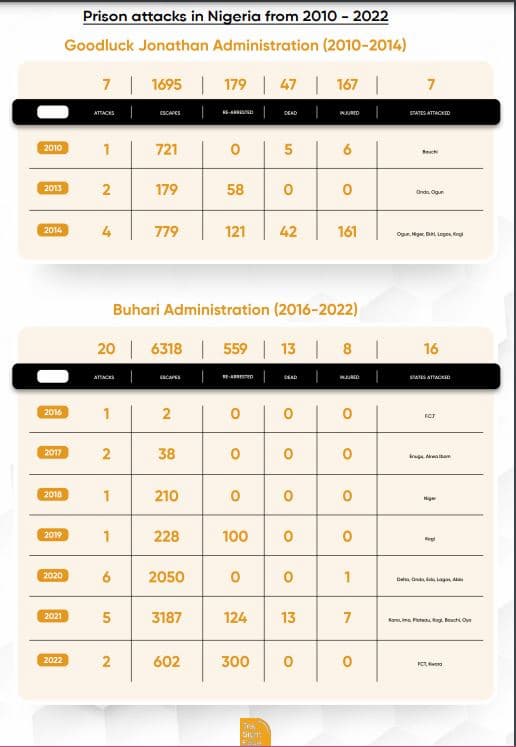 Timeline Of Prison Breaks In Nigeria: Buhari vs Jonathan

A prison break occurred in Bauchi in 2010. 721 dangerous inmates escaped. However, there were never any re-arrests.

Also, in 2013, two prison breaks occurred in Ondo and Ogun states. 179 inmates escaped. However, 58 were re-arrested.

In 2014, four attacks were launched on prisons in Lagos, Niger, Ekiti and Kogi.

About 779 inmates escaped during these prison breaks while only 121 of them were re-arrested.

These attacks sum up to seven.

The 20 prison breaks so far during this current Buhari government are as follows:

In 2016, one prison break occurred at the Federal Capital Territory, FCT. That jail break saw two prisoners escape into thin air and have never been spotted again.

In 2017, the attacks increased to two, also with zero re-arrests.

The jail breaks occurred at prisons in Enugu and Akwa Ibom. 38 prisoners escaped without trace.

In 2018, one jailbreak happened in Niger. 2010 dangerous inmates escaped and till date, no arrests were made.

Also, in 2019, one prison break happened in Kogi. Although 228 inmates went missing,  100 were later recaptured.

Similarly, in 2020, Nigeria recorded six prison breaks, with some occurring more more than once in Delta state.

Here are the states that recorded prison breaks in 2020. Delta, Edo, Ondo, Abia and Lagos.

Meanwhile, about 2050 inmates escaped these prisons while there was never any re-arrest!

The attacks recorded about 3187 escapees.  Only 124 inmates got re-arrested.

In 2022, two prison breaks occurred in FCT and Kwara. 602 inmates escaped while only 300 got re-arrested.

Percentage ratios of the prison breaks, Jonathan vs Buhari:

The percentage ratio shows that while 1695 dangerous prisoners escaped during the seven prison breaks that occurred in the time of Jonathan-led Peoples Democratic, PDP’s administration, at least, 6318 prisoners have escaped president Muhammadu Buhari’s prisons which are littered across the country and these prisoners pose great dangers to the Nigerian society.

Meanwhile, out of the seven prison breaks that occurred during the Jonathan administration which we can say lasted from 2010 to 2015, only 179 escapees were re-arrested.

This signifies an 11% re-arrest made by the Jonathan government from the total number of dangerous people who escaped his prisons.

Conversely, of the 20 prison breaks so far from Buhari’s prisons, only 559 escapees have been re-arrested, as at the time of filing this report.

This signifies a 9% success in re-arresting back the dangerous prisoners and taking them back to the prisons.

Therefore, if you weigh these two efforts at re-arresting back the prisoners, you would observe that Nigeria had better security during the Jonathan government than the country has in this current Buhari’s government.

Keep in mind that president Buhari had told Nigerians during campaigns that he was going to end insecurity in the country.

He had told Nigerians that he already had the solution to the country’s insecurity challenges.

So, going by the frequent attacks on some facilities in the country, including military bases, Buhari’s promise of securing Nigerians becomes largely unfulfilled.

Note also that the combined administrations of Buhari and Jonathan have cumulatively freed about  7, 275 untraced dangerous persons to the society!

This means that these dangerous persons, majority of whom are terrorists, may have mixed with the society, posing great dangers to the people.

However, although Jonathan has since left government, recent heightened insecurity in Nigeria necessitated the comparison between his PDP administration and the current APC government led by Buhari.

Moreover, in terms of the percentage difference between the number of prison attacks to the number of escapees, more dangerous prisoners escaped Jonathan’s prisons than they have escaped current president, Muhammadu Buhari’s prisons.

The differentiating ratio is 0.1% positive to Buhari’s APC, despite the total number of attacks and escapees over that of Jonathan’s PDP governments.

Also, if we consider the percentage difference between the re-arrest of prisoners under Jonathan and those under Buhari, the gap is about 27%.

This means that the insecurity challenges in Nigeria is worse and continues to fester under Buhari.

So, with a 27% increase in attacks under Buhari’s watch, as against the past administration of former president Jonathan, signifies that Nigeria was safer in the hands of Jonathan than the country currently is under Buhari.

The recent prison break at Kuje prison in the same day that president Buhari’s convoy was attacked by terrorists is the height of it all.

This is despite the huge budgetary allocations by the Buhari government to the combined military forces in Africa’s most populous country.

In fact, while the budgetary allocations increased, the security situation in the country gets worse.

From the budgetary allocations by the Buhari administration from 2015 till date, you would see that the allocations keep increasing yearly.

However, despite the huge and increasing budgetary allocations to the combined military forces in Nigeria by the Buhari administration, the security situation in Nigeria remains very poor.

Nigerians are more insecure in the current government than they had ever been.

Therefore, it is imperative that the security chiefs seat up and tame the insecurity in the country to show for the huge budget allocated to their jurisdictions.

How To Block Inappropriate Contents On Instagram In Nigeria