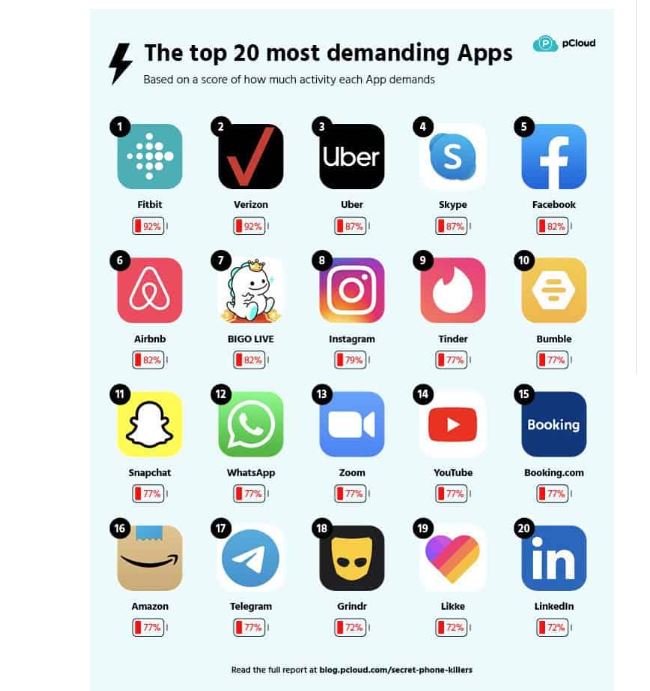 Of course you may have been wondering why the battery of your device suddenly drains fast.

This report will show you top ten apps that drain the battery of your device so fast.

You will also learn how to make these apps re4duce the amount of power they drain from your device.

The battery is the one aspect of smartphones that users tend to worry about the most.

Although this is very challenging given that these apps drain the battery, we start thinking about different ways to reduce energy consumption and increase its battery life as soon as the device is turned on.

Although they are not always successful, we are accustomed to taking a variety of steps to extend the battery of the smartphone as much as possible.

Primarily because we now know which applications are the most dangerous in this regard.

Because they completely deplete energy with just the use of them.

Here are top ten applications draining the battery of your device the most:

There are countless applications for your Android device in the Google Play Store.

There are services for everything, but on the whole, users tend to download the same popular apps.

However, in order to best care for the battery in your smartphone.

There are some of them that you should avoid downloading or using less often.

Be cautious, while some of these applications are quite helpful and should be installed on our smartphones, others can be disastrous for those who already experience battery issues.

So examine whether you actually require them. The list of apps with the highest energy usage is as follows:

The organization that has compiled this data is pCloud, a research firm.

To achieve this, they created a list of applications that use the battery of the device the most.

And the end result is shown here.

No matter how great these platforms are, according to the entity, they are affecting the battery life really hard.

Actuality, they are very well popular apps, and you may have more than one of them on your phone.

Since they can still use some of the battery in the background, it might be more convenient for you to get rid of some if you don’t use it frequently, especially if you’ve had battery issues in the past.

THE SMARTPHONE’S MOST DEMANDING APPLICATIONS:

The research firm looked at three factors when determining which apps were the most resource-intensive on our phones.

The things each app uses, such as the location or camera, the battery these applications consume, and whether the dark mode is offered.

They were able to determine which of the 100 most popular apps is the most demanding and name them the ultimate phone killers by combining the results of these three factors.

FITBIT AND VERIZON ARE THE MOST APPS THAT DRAIN YOUR BATTERY”

The two best phone competitors were Fitbit and Verizon.

14 of the 16 resources that are available can be in use by both apps in the background.

Including the four most resource-intensive ones.

The camera, location, microphone, and wifi connection. Due to this, these apps received the highest study score (92.31%).

Social media apps account for six of the top 20 battery-intensive apps on your phone.

On average, 11 additional resources —including photos, wifi, locations, and the microphone.

Each of these uses more energy to operate, which puts more strain on your phone’s battery.

According to the research, online dating apps use the phone’s battery just as quickly as your emotions do.

15% of the top killer apps are online dating apps like Tinder, Bumble, and Grinder.

Which permit an average of 11 resources to run in the background.

The lack of a dark mode makes all three dating apps more energy-intensive to use, which accelerates battery drain.

The United Airlines app uses up the most phone storage (437.8MB).

Followed by the Lyft and Uber apps with storage requirements of 325.1MB and 299.6MB, respectively.

All of these apps require a lot of storage, which slows down your phone and uses up storage.

Fortunately, when you’re not traveling, you can easily delete travel apps like United Airlines.

When thinking about how to free up phone storage, these should be the first to go.

Additionally, less extensive airlines like Ryanair and Jet2 only need 109.2MB of storage and 47.3MB, respectively.

Both can be easily exchanged.

However, when it comes to having convenient transportation on a daily basis, apps like Lyft and Uber are more of a necessity.

Make sure to only have one trustworthy transportation app.

So you can save space for other apps and make your phone run faster rather than deleting both of them.

HOW TO STOP APPS FROM DRAINING YOUR BATTERY:

Many people might be pondering whether you ought to remove these apps from your smartphone in order to free up storage and battery life.

In this regard, it’s crucial to emphasize that this precaution does not need to be perfect.

Because you can opt to turn off background activity or location permissions.

Despite not being open, every Android app functions in the background.

It is possible to fix this issue.

But you should be aware that doing so will prevent you from receiving notifications until you re-enter the platform.

As a result, we advise you to only use this procedure in special circumstances.

And not with applications that are absolutely necessary:

3. Choose “Optimize battery use” under “Advanced settings” from the menu.

4. Tap “Don’t optimize” after selecting the apps you want to disable background activity from.