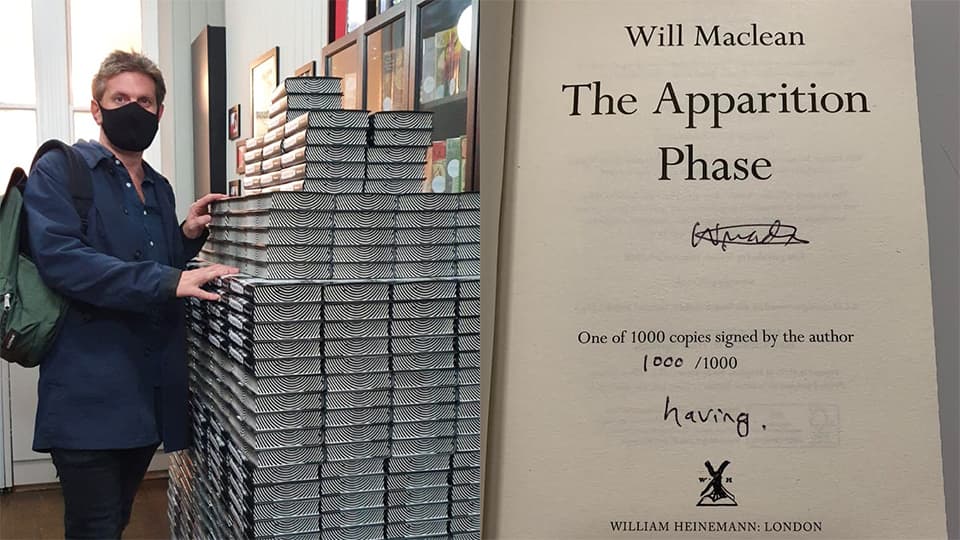 This might be the wittiest promotional strategy that any author has come up with in recent times. With certainly no cost at all – asides from the troubling wrist ache that we reckon Will Maclean will be getting – his debut novel is enjoying wide recognition across borders.

Last month, Will Maclean released his first novel with the title “the Apparition Phase.” The novel featured sinister scenes as he delved into the lives of children disturbed by evil spirits. Now, this already sounds interesting. Scary, but certainly peek worthy. But what’s more interesting is what Will has done outside the story, which he captured in this book.

Will has created a word puzzle. If you think of it, it’s more like a story puzzle. And it will take 1000 owners of his new book’s exclusive edition to solve it. To mark the publication of the book, London’s Goldsboro bookstore released 1000 signed and exclusive copies.

In each of these copies, Will has written one word each. The words vary from copy to copy and form a part of a story that’s separate from the one told in the book. Maybe this wasn’t intended to be an advertising strategy. But, his initiative has drawn eyeballs and created engagement among readers striving to put the puzzle together out of curiosity and a will to unearth this hidden tale.

According to a note from Will, you’d find a single word handwritten by him on the title page of each available copy of the book. The words might be meaningless alone. But, put together with the rest, they form a story that’s exactly 1000 words long.

ALSO READ: Twitter Calls for Help in Its Approach to Verification

Several readers are trying to solve the puzzle together on Twitter. In the process, they’ve also captured the attention of non-readers. Book bloggers have also found this subject to be newsworthy. As these bloggers talk about it, their vast audience is getting to know about this new book.

On Wednesday, a book blog @lovedreadinthis on Twitter announced that 70 words had been found. They urged readers to help them collect the words and also retweet so others can join in the word search.

In case you missed it we are searching for 1000 words! Will Maclean signed 1000 copies of his book The Apparition Phase & in each copy he wrote 1 word. Put together these 1000 words make a story.
Twitter please help to find the 1000 words! Please Retweet#apparitionphase1000 pic.twitter.com/a6TD7vi3nw

We won’t be surprised if you’re asking how in the world readers will be able to make sense of 1000 words collected haphazardly. But that part is simple, and Will made it so.

How do we put the pieces of the puzzle together? Simple. On the title page of each copy, there’s a note that reads, “One of 1000 copies signed by the author.”

Below that note, Will numbered the copies accordingly, helping you to know the place of each copy among the whole 1000 collection. If readers can get all copies and send in words on their copies from copy 1 to 1000, we’d have Will’s hidden story captured.

According to Will, this story has not been written anywhere else in the world. Not even in his hidden diary, that’s if he possesses one.

Will has been watching from behind the scenes, and we reckon that he’s having a good feeling seeing the curiosity of book lovers run wild. He has shown up on some occasions to help clarify any confusion spinning from his handwriting.

Barely 100 copies have been confirmed as of the last count. Going by that, we still have a long way to go before we unearth this mystery writing. But, nothing of this nature has ever been impossible for Twitter’s vast fan base.

However, as we have repeated through this article, it will take many hands and eyes to fix this puzzle. By the time the puzzle is fixed, Will would have succeeded in taking us all on a journey.

The title of his debut novel would have become a constant melody. Readers will already be fond of the author’s name. Some will look him up and get to explore his previous works. All of these results capture what we agree to be the genius of this act performed by Will.

What do you think about Will’s one thousand words writing dispersed into the world idea? Childs play or pure genius? Let us know in the comment section.