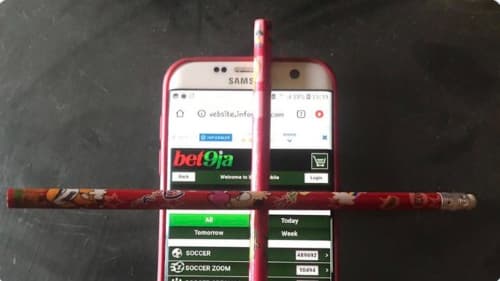 “Charlie Charlie” trended on Wednesday on Twitter in Nigeria with over 2ook tweets. Many Nigerians took to their social platforms to share their reactions.

Some dared to play the game while others shared comments using the hashtag #CharlieCharlie.

The game involves two pencils and a piece of paper. The paper is divided into a quadruple with a pen or a pencil. The first side consists of either a written “yes or no,” same with the other side.

Me : Charlie Charlie Is wizkid a G.O.A.T

Then participants of the game will ask a question using the name Charlie, as the addressee. Then the response will come through the pencil’s movement on top.

Whatsoever direction the top pencil points at serves as the answer.

ALSO READ: Tesla Records Half A Million Vehicle Production In 2020

What brought about the game?

Interestingly, the game dates back to the early twenties. However, there have been no specifics on how it started trending in Nigeria.

Many have reportedly said it is a demonic game that has been modernized from the Spanish paper and pencil game named “Juego de la Lapicera’.

One of the retouching stories associated with the game is that Charlie is a child who died and now became a ghost from hell that can answer any question.

However, according to Maria Elena of the BBC world, she said, “There’s no demon called ‘Charlie’ in Mexico,”.

Many Nigerians are wowed at the outcome of the game and the movement of the pencil.

But what is really wowing is the amount of attention the challenge is getting. Presently, as the article is being written, it has 227k tweets on the bird app.

Many have reacted openly to the game and even participated in the so-called demonic game.

However, we can gather that many believe the story is a myth, and it’s untrue with some of the reactions shared.