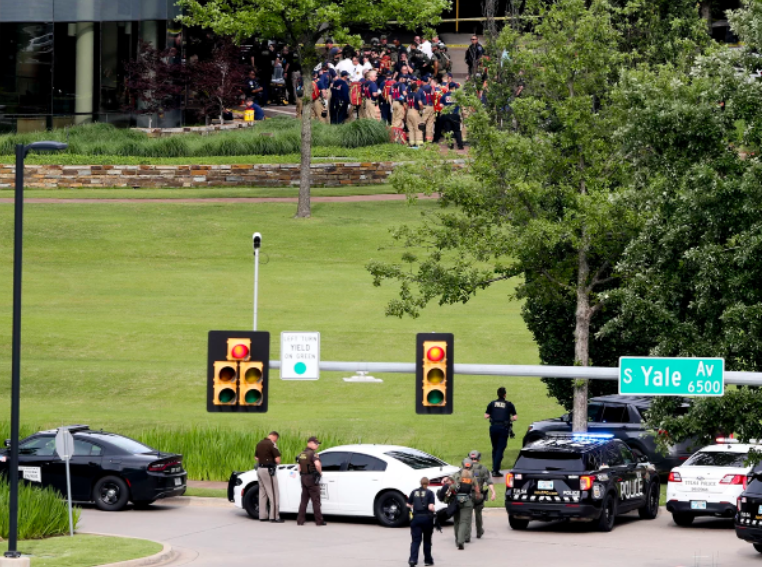 A shooter whom the police have not yet identified, stormed and opened fire at the Saint Francis Hospital in Tulsa, Oklahoma, on Wednesday.

He had opened fire on the second floor of an orthopedic center, a crime the police said was premeditated.

ALSO READ: SendOff, An App To Plan Your Funeral, Others: Would You Use It?

“This was not a random shooting by this individual.”

“It was just madness inside, with hundreds of rooms and hundreds of people trying to get out of the building.”

Confirming the deaths, Jonathan Brooks of the Tulsa police department said “Four innocents and one shooter” are dead.

Police believe that the shooter killed four persons and shot himself.

According to Brooks, the shooter “died following a self-inflicted gunshot wound. The shooter had a rifle and a handgun on him.”

“Officers are currently going through every room in the building checking for additional threats.”

“We know there are multiple injuries, and potentially multiple casualties.”

He said authorities are trying to determine if they were wounded by gunfire or during the chaos of escaping the scene, he said. No officers were injured.

He called it a “catastrophic scene.”

How police swooped into action immediately:

The call was about an individual with a firearm at the Natalie Medical Building on the campus of St. Francis Hospital.

Responding officers who arrived within minutes “were hearing shots in the building, and that’s what directed them to the second floor,” Dalgleish said.

However, on getting to the building on the second floor, they found the gunman dead.

They also discovered two weapons; a “semiautomatic rifle” and “a semiautomatic pistol” lying next to the shooter.

Equally, the police found two  other dead victims in the same room as the gunman.

Police are yet to identify the victims.

It was still unclear whether the four victims were medical staffers, patients or visitors.

Some witnesses spoke about the unfortunate event.

One witness, Lachelle Nathan told CNN, that she knew it was a shooting case when she saw police entering the hospital with their weapons drawn.

She had arrived in her car with her daughter-in-law and grandchildren for a doctor’s appointment.

“It’s awful, it’s sad. My daughter-in-law is from Buffalo, so now it’s so close to home, it’s not even safe if you come outside anymore, you know?”

“I mean, you see it on TV,” her daughter-in-law said.
She added, “but you don’t think it’s actually going to happen right in front of your eyes.
“So, this is a wakeup call for my kids, this can really happen anywhere and it’s very scary.”
“You can’t even go to a store, you can’t even go to school, now you can’t go to the doctor?”
“I just knew that it was a shooting situation because I saw police running with rifles,” Davis, 45, told CNN. “That’s when I got emotional.”
This is just one of the horrific deaths in the United states this year.
With this latest shooting, it is imperative to look at top states in America with highest gun death rates.

Tulsa shooting becomes the 233rd mass shooting for the year in the U.S.

This is according to data from by the Gun Violence Archive.

The archive characterizes a mass shooting as comprising shots or deaths of four or more, not including the shooter.

Moreover, ten people died in a racist assault at a supermarket in Buffalo, New York, on May 14.

Also, another mass shooting followed  at a church in California on May 15.

Following that was another heartbreaking massacre at an elementary school in South Texas on May 24 where at least 21 persons died.

Texas has the highest gun deaths as compared with other states. this is according to data from the US Centers for Disease Control and Prevention.

California, by comparison, had 3,449 deaths, with a gun death rate of 8.5.
Meanwhile, Cracktechnology.com reports that data by CNN gave the following as the top states with highest gun death rates:

The top states by gun death rates are:

It said the following states top the list for gun death rates between 2007 and 2016.

States with the lowest gun death rates in 2020, per the CDC includes:

Meanwhile, going by the rates, it is clear that states with lax gun laws have the highest gun death rates.

Data from Everytown’s analysis of FBI, revealed the cities with lax gun laws and having highest gun homicide rates in 2020.

House Democrats are looking to pass a gun control bills. This is in response to the various shootings in the states.

The bill seeks to raise the age limit at which a person can own or purchase a gun.

Stakeholders argue that an 18-year-old should not have access to a gun.

In the US, less than 18-year-olds can walk up to a gun store and purchase a gun.

This gun lax has led to many teenagers and younger persons possessing firearms and engaging in mass shootings.

Consequently, stakeholders are calling for on the government to raise the age limit at which a person can own a gun.

The Raise the Age Act would lift the age to purchase a gun for semiautomatic rifles from 18 to 21.

Among other bills the House committee will face includes the following:

It has become a recurring occurrence for mass shooting in the U.S.

Citizens need to become alert about their surroundings.

Public places such as schools, stores and churches should have more security personnel guiding them.

The society needs to discourage bullying at, especially schools as this leads many suspects to engaging in mass shootings.

Gun control is the only way Americans can protect it citizens.