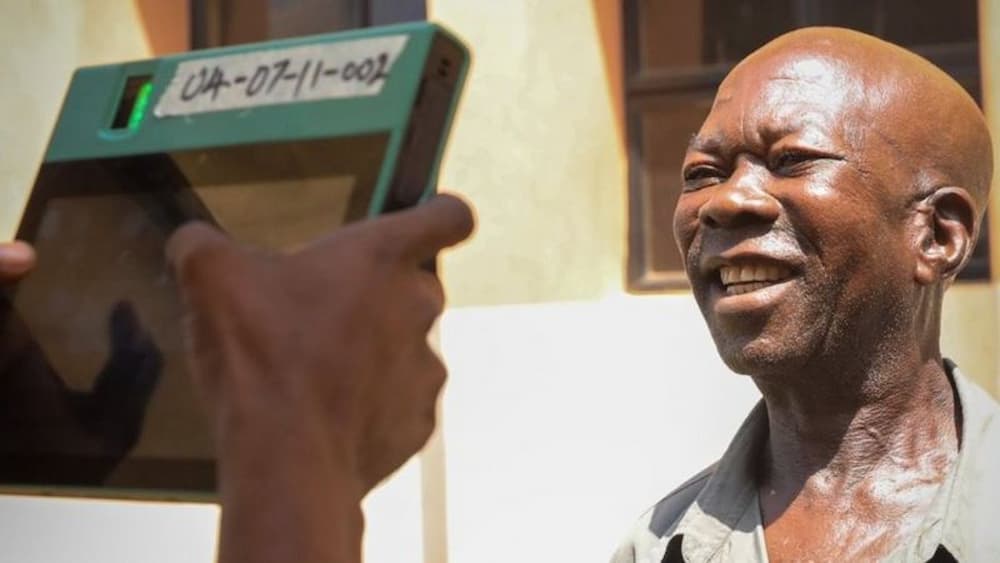 What you will read in this report:

…What is bimodal voter accreditation system?

…The loopholes of BVAS

The voting technology, according to INEC, will terminate election rigging and other electoral malpractices.

Also, the Bimodal or Biometrics Voter Accreditation System has replaced the Card Reader System which INEC introduced in 2015.

INEC replaced the Card Reader system because of some shortfalls which ended up not addressing the issue of election rigging.

However, the electoral commission deployed the new voting system in the just concluded governorship election in Anambra state.

Also, the electoral umpire has touted the BVAS as an unbreakable system that prevents any form of electoral malpractice.

However, like every other technology out there, the BVAS is not without its loopholes.

Also, the loopholes associated with the voting system can affect the credibility of an election.

The system, like other electoral systems, can also encourage manipulations and lead to election rigging.

Nevertheless, the adoption of the technology voting system is a right step in the right direction.

Also, integrating BVAS for elections in Nigeria underscores the importance of technology in our everyday lives.

It also shows how important the people regard the process of choosing their leaders.

Electoral processes have to be free, fair, and credible to enhance the credibility of the elected authority or government.

This is because a credible election entrenches political stability and provides better chances for sustainable development.

However, the lack of credibility in the electoral processes remains a serious concern for many democratic countries.

Over the years, the Nigerian elections have been marred by many issues which majorly include electoral malpractices.

The analogue voting system involved ballot papers and boxes, as well as other non-digital processes.

Also, with the rigging, candidates who were not the people’s choices emerged leaders.

Similarly, electorates lacked dividends of democracy as a result of bad governance from people they did not democratically elect.

However, to correct this anomaly, the fusion of technology and election became very critical.

Consequently, electoral processes became one of the major integrating areas of technology and governance.

World countries, including African nations like Kenya and Ghana are among countries that have adopted technology integration with election.

The trend is the adoption of the electronic voting system and Nigeria remains on the front burner in this regard.

Electronic voting systems are in the area of voter verification, voting and votes counting.

The system is also for real-time collation of votes, transmission, and publishing of results from all polling centres.

In 2015, Nigeria ventured into electronic voting with the deployment of the Smart Card Readers.

The card readers were for verification of the Permanent Voter Cards (PVCs).

It was also for verifying the biometric authentication of the person presenting a voter card as the legitimate holder.

However, the card readers failed in addressing the issue of electoral malpractices.

Here is how the smart card Reader failed to ensure credible elections in Nigeria.

2. The SCR then determines if the PVC holder is supposed to vote at that particular polling Unit (PU).

A voter’s information displays on his voter card and on the smart Card Readers too.

So, in case the voter forgets his polling unit, SCR shows where his or her polling unit should be.

This stage requires the electoral official to look at the face on the PVC to make sure it matches the bearer’s.

Because the SCR has a scanner and captures finger prints, such capturing may encounter glitches.

It may not have captured all 10 fingers of a prospective voter.

Also, the quality of the fingerprint scanner may be bad.

Nevertheless, INEC provided Incidence Forms where a voter fills his or her details and is cleared to vote.

The voter proceeds to vote if the official is satisfied that his or her face matches the photo in the Voter Register.

So, whether the SCR has authenticated the fingerprint of the voter successfully or not, he/she must be allowed to vote!

The only condition is that the voter fills the Incidence form.

ALSO READ: How Technology Is Propelling Transparency: #EndSars And FemCo In Focus

This system is replete with cases of unverified voters, multiple voting, ineligible voters as well as rigging aided by electoral officials.

So, it did not address the credibility challenge of Nigeria’s electoral process.

On September 13, 2021, INEC said it had applied several technological innovations to manage the country’s electoral processes.

It wanted to correct the loopholes posed by the Smart Card Readers.

The body introduced the online pre-registration of voters as part of the Continuous Voter Registration (CVR) exercise.

Also, it also introduced the INEC Results Viewing (IReV) portal where voters can see results as they pop in.

The umpire also introduced separate portals for nomination of candidates.

It introduced separate portals for accreditation of election observers and the media for elections and for nomination of polling agents.

Meanwhile, the most significant innovative introduction is the Bimodal Voter Accreditation System (BVAS).

What is bimodal voter accreditation system?

BVAS stands for Biometric Voters Accreditation System. It is a new system of voting which was introduced to replace the smart card reader.

Apart from authenticating the permanent voter’s card (PVC), it also authenticates fingerprints and facials of voters.

To ensure credibility, BVAS will first authenticate a voter’s PVC.

After that, it authenticates their Fingerprint patterns, and finally, performs facial recognition.

All these are steps that INEC has put in place to ensure free and fair elections.

3. Also, it functions as INEC Results Viewing Device (IReV Device). INEC officials can use it for election results upload on Election Day.

Because BVAS performs the functions of both the Smart Card Reader and Z-Pad, there is no need for those.

Also, it makes the useless any need for the filing of incident forms.

“What INEC did is called a technological convergence. An enrollment device is what is being used for the continuous voters’ registration. In the Anambra election, this device will become the bimodal voters accreditation system which will be used to verify the biometrics of the voter.

“This will now transform into a Z-pad which will be used for upload of results. It is a three-in-one device. The smart card reader has been phased out. INEC is embarking on massive voter education via the radio and the television.”

A California-based biometrics developer and service provider, Tascent, is believed to provide the BVAS for the Nigerian elections.

The company, in a recent release, confirmed it got the license to provide biometrics services and products for Nigerian elections.

The company which founded in 2015 said Nigeria will use its multi-modal biometric mobile portable device to capture the biometric features and biographic details of registrants in a single, integrated, and compact device which offers intuitive face, fingerprint, and iris biometrics in just a few minutes.

It said it “develops and deploys biometric identity products and solutions that excel in challenging, real-world environments.”

Tascent claims it “has a strong heritage in iris recognition and multimodal high-throughput and mobile biometrics stemming from its acquisition of AOptix Identity Solutions.”

The BVAs features product qualities of Tascent as it leverages dynamic face acquisition and best-of-breed algorithms.

BVAS runs on the best algorithms such as artificial intelligence for biometrics and facial recognition capturing.

The company says on its website that its product, Tascent MX, “combines the world’s leading smartphone devices with advanced face, fingerprint, and iris biometrics to power enrollment and authentication.”

Therefore, the BVAS likely runs on this best form of algorithm touted by the company.

Some of the advantages of the new voting technology are as follows:

It also stops rigging during elections.

These features ensure no one can use a voter card that is not theirs.

The BVAS will first authenticate a voter’s PVC, then their Fingerprint pattern, and finally, perform facial recognition.

Studies have shown that there are no two humans with the same fingerprint pattern.

So, BVAS authentication process can be flawless.

It also ensures that the rightful and credible candidates emerge winners in elections.

It also reduces cost incurred in employing and deploying humans to do incidence forms.

The loopholes of BVAS

Many people have praised the new voter accreditation system for its ability to eliminate electoral malpractices.

However, the loopholes resulting from its usage rather proves otherwise.

It failed to capture the fingerprints of some voters.

A report by PremiumTimes said the device malfunctioned at polling units 003 and 004, ward 3 in Uruekwo primary school in Enugu-ukwu, one of the major towns in Njikoka, anambra state.

Some counties use devices that collect and calculate results at once, such as the BVAS, AccuVote TS and TSX voting machines.

However, some of these devices lack basic cybersecurity, like encryption or strong passwords, says James Scott, a senior fellow at the Institute for Critical Infrastructure Technology.

Consequently, hackers can hack into their software and add, delete votes in favour of a candidate.

Also, hackers may target the facility or database  for counting votes.

They can attack computers tabulating results from polling units.

Also, politicians may hijack such opportunity to rig the election.

In the Anambra election, an INEC official lacked the operating knowledge for BVAS, reports Nationaldailyng.

“The official did not know how to set the BVAS machine for voters’ accreditation even as voting was in progress in a polling unit.”

“A Presiding Officer was said to have wrongly set the BVAS for accreditation of voters at Polling Unit (PU) 008 Awka Ward 7, Umuokpu Awka, Awka South Local Government Area, and most people had voted with the improper BVAS which was reading 0 before the arrival of the supervisor who detected the error. She immediately ordered the cancellation of all votes cast already and a complete start all over again.”

Some electronic accreditation and voting machines are vulnerable. The fingerprint and facial recognition may fail to authenticate a voter.

However, because the electoral officer has to ensure the authentication, such officer may compromise the credible process if bribed.

In the US election, the electronic machine, Sequoia AVC Edge machines, feature a yellow “Activate” button on the back that can allow user to enter multiple ballots at a time.

An electoral official can tamper with the machine’s memory cards in person or over a remote internet connection.

Such a person could then add or subtract hundreds of votes for a candidate.

The biometric system is vulnerable to network failures and this can equally lead to an election not being credible.

For example, during the Ugandan elections, the electoral umpire abandoned the biometric voter identification due to network failure.

For the BVAS to maintain high credibility, there should be such standards requiring a unique identifier for each ballot record.

INEC must ensure that BVAS has a unique identifier which records (serial numbers, zero tapes, ballot images, and results tapes,) for each ballot.

This is an accounting mechanism that ensure proper account of each ballot.

Also, electoral official must have properly education on how to operate the devices.

Similarly, there should be enough modalities in place to ensure proper cybersecurity as well as good internet connections.

What this implies is that Nigeria has taken many right steps in ensuring credible elections.

With this system, the peoples’ votes will now count.

Electorates’ choice candidates will emerge as winners in elections.

This will result in good governance and development.