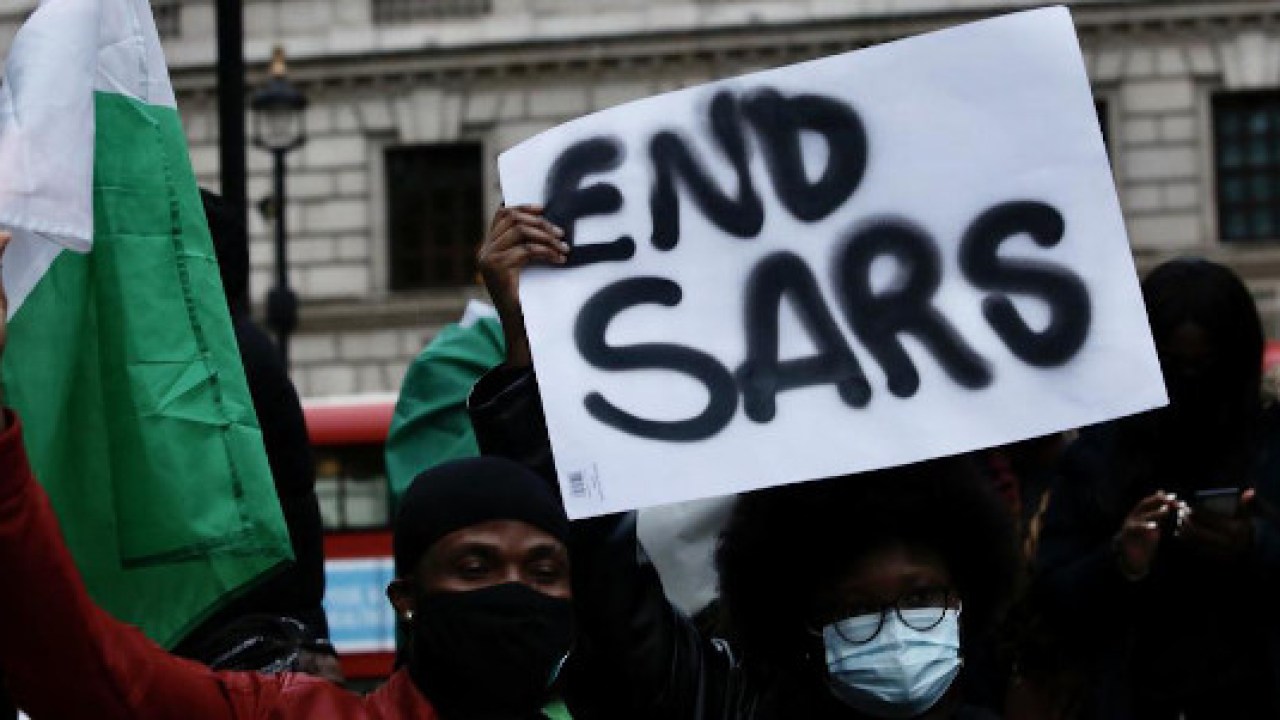 Technology has become viable tool propelling transparency. We see this with #EndSars donations and Femco, an administering group for #EndSars.

Recently, we have seen how people have gone on social media technologies such as WhatsApp, Instagram, Facebook, Tiktok, Snapchat, Clubhouse and especially Twitter to demand transparency from bodies and governments.

A most recent case is that concerning FemCo’s management of funds donated for #EndSars protests in Nigeria.

But before we delve fully into that, there are things you should know.

#EndSars is a social media campaign hashtag that Nigerians formed to document, mobilise and demand justice against police brutality in Nigeria.

It began in 2017, although demands for justice against police brutality dates even further back.

The Special Anti-Robbery Squad (SARS), which is now a disbanded unit of the police, is the main culprit of the brutality.

SARS operatives engaged in torture and other ill-treatments to execute, punish and extract information from suspects.

Most of the suspects were innocent youths.

According to Amnesty International (AI), the SARS operatives also engaged in extortions.

Nigerians, including AI also accused SARS of robbery and extrajudicial killings of innocent youths, but the police denied the allegations.

However, through the help of technology, the world came to unravel the truth.

But the continued demand for justice through #EndSars protests forced the Nigerian government to disband SARS.

This was after many protesters, in 2020, lost their lives while several others sustained varying degrees of injuries.

According to Amnesty International, “On 20 October, the Nigerian army violently repressed a peaceful protest at the Lekki toll gate, shooting at the protesters and killing at least 12 people. Since that day, the Nigerian authorities have tried to cover up the events of the Lekki Toll Gate Shooting. They froze protests leaders’ bank accounts and fined news agencies who diffused videos of the shooting.”

However, the protest which first took a massive scale in 2020 after the shooting at Lekki Toll Gate, is again on today.

Millions of Nigerians, especially the youths, are again in the streets today to commemorate those who lost their lives during 2020 #EndSars protest.

Meanwhile, the protests have continued to enjoy financial support in form of donations running into many hundred millions of naira.

FemCo, a rights group, collects the donations and disburses same to cater for #EndSars needs. .

However, when FEMCO could not transparently account for the funds it received and expended for #EndSars, Nigerians have used technology to demand transparency.

FEMCO stands for Feminist Coalition and it is a female rights group in Nigeria that received donations to cater for #EndSars needs.

The group managed funds which donors donated to cater for the protest and other expenses.

Femco received some of the funds in forms of Bitcoins, dollars and Nigerian naira to cover logistics and other expenses concerning the protest.

Some of the expenses include: refreshments, medical bills of people who suffered bodily harm during the protests.

Others are legal fees of protesters who were arrested and detained by security operatives for peacefully protesting.

The donations are clearly to support the protest against brutality on innocent citizens by security operatives.

The group also said it received some donations in bitcoins.

It further released a report giving account of income and expenditure but it was unclear to Nigerians and some donors.

In March of 2020, FEMCO published the report of the total funds it received and expended.

Though many donors and #Endsars supporters lauded FEMCO over its alleged professional handling and disbursement of the donated funds, many pointed out disparities.

For instance, FemCo did not give the names and companies, legal practitioners and hospitals it claimed it disbursed funds to.

Also, some protesters who fell victim of one form or another during the protest claimed they did not get any financial support from FemCo. 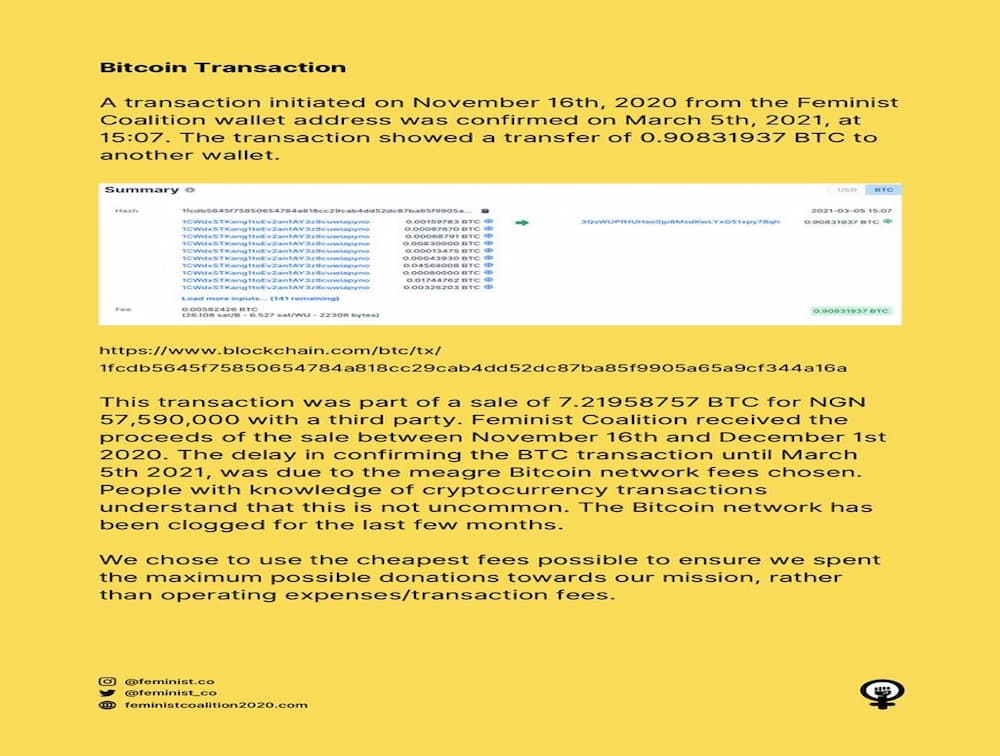 Likewise, FemCo said it spent N2m out of a possible N5.2m to produce the documentary of the protest.

However, the sum did not tally with its account as the fund for victims of brutality remained N40.2m.

The disparity in FEMCO’s report that raised the biggest dust is the group’s claim about bitcoin transaction.

It also said although it received payment in less than a month of the transfer, it however took nearly 4 months to confirm the payments.

The group blamed the delay on poor network and meagre transfer fees it chose.

Also, FemCo said it initiated the bitcoin transaction in November, 2020.

However, Nigerians among the tweeting community, including those abroad said FemCo’s claims are riddled with lies.

Some tech experts among the tweeting community disagreed with FemCo’s claims.

First, they said FemCo received 1.47 Bitcoin and not the 0.9 Bitcoin it claimed. This means 0.57 Bitcoin is still unaccounted for.

Also, FemCo did not initiate the bitcoin transaction in Novemebr 2020 but in March 2021.

In fact, they said no crypto transfer should remotely take four month to be confirmed.

Corroborating this, cryptocurrency platform, Paxful said in an article that it only takes five minutes and at most, 72 hours to confirm transactions.

It said “It takes two confirmations from the network before your balance is fully available in your Paxful wallet. This is the industry standard for a truly secure wallet. This can take anywhere from five minutes to an hour, depending on the Bitcoin network.”

More on Femco, technology and transparency:

Also, Nigerians and donors have expressed dissatisfaction over FemCo’s income and expenditure report.

They took to social media to accuse FEMCO of not being transparent with the total funds it generated as well as the expenditure.

The tweeting community accused the group of withdrawing N23m worth of bitcoin donated for #EndSARS protest and transferring it to private accounts.

One critic, @Rx_Deyholar said, “Feminist co withdrew $51,000 worth of Bitcoin from their donation wallet on the 5th of this month silently.”

Similarly, another, @adeyanjudeji tweeted thus: “So these FEMCO babes actually started spending money donated by Nigerians for #EndSars just like that. These were the clowns that called SEGA a fraud. Emergency activists.”

Similarly, another Twitter user, @PoojaMedia also accused FemCo of embezzling some of the funds.

According to him, “Sadly, N75m worth of Bitcoin was moved from the Femco account to a private account & it was not captured at all. Nigerians challenge politicians for accountability but when we ask ourselves, it’s a witch-hunt & jealousy. Sorosoke generation indeed.”

Some donors have equally called out the group to come clean.

Another donor, @avogroovy, tweeted saying, contrary to claims by FemCo and supporters, that he donated some bitcoins.

The group said it took almost four months to confirm its bitcoin transaction but critics have faulted the claim.

He was reacting to another tweet by one of FemCO defenders, @EditiEffiong who claimed FemCo’s transaction was transparent.

He had also said that all donors  got satisfaction with FemCo’s report.

Supporting him, @raychellerd defended FemCo saying, “Lmaooo you have a techpro on the FEMCo board and you think they don’t know you can see their transactions? If they wanted to steal money, you think they would just move _51k at once?

However, @avogroovy countered them saying thus: “I wouldn’t go as far as say FEMCO stole, but they did LIE about the Bitcoin transaction date. BTC was $18,500 in Nov & $58,000 in March hence an opportunity for arbitrage. We had foreign onchain analysts prove how FEMCO lied but Nigerians said we are poor, envious misogynists.”

Similarly, another user, @agayiba, faulted FEMCO and other supporters’ claims on the duration to confirm bitcoin transactions.

According to the user, “Tech co-founders in Nigeria supported a Femco narrative that a bitcoin transaction took 4 months to execute and backed screenshots of that fallacy because their friends were involved. Tomorrow you will say that snake swallowing money was a ridiculous story by our politicians.”

Consequently, Adeyanju and many others urged the group “to come clean and give account of every Kobo donated.”

They said they would report the group to the anti-graft agency, the Economic and Financial Crimes Commission (EFCC).

The case of FemCo and the #EndSars funding shows how pivotal technology has become in opening up transparency.

Also, the protest forced the police to be transparent in restructuring SARS after it had failed to do so since 2015.

This became possible, thanks to social media technology.