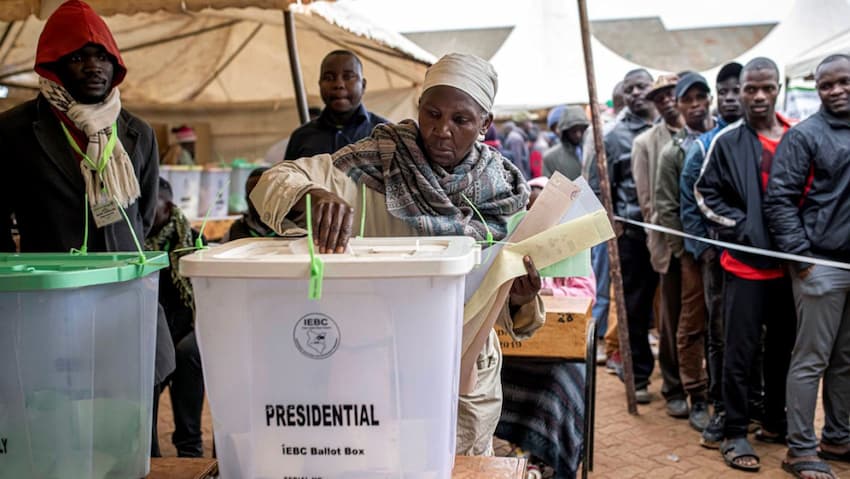 Kenya’s electoral system could be better than Nigeria’s in many ways, as evident from the country’s last Tuesday’s election.

1. Tenure of office.
2. Eligible voters: Diaspora and prisoners can vote.
3. Political Inclusion And Gender Equality.
4. Stipulated Date for elections that is Sacrosanct.
5. Dependent or Independent Candidates.
6.  Margin to emerge winner of elections.
7. Duration of elections.
8. Number of presidents.
9.Age limit of candidates.

Meanwhile, before we discuss these areas extensively, here is what you should know.

What You Should Know About Kenya 2022 General Election, Nigeria and others:

Also, both countries are similar in that they both have younger population, former British colonies and run democracy systems of governments.

Additionally, while both countries also gained their Independence from Britain, they, however, both suffer high unemployment rates, inflation and corruption. Politicians campaign using political, economic and cultural appeals to the people in both countries.

Furthermore, both countries have adopted an electronic voting systems which have reduced election violence, rigging and election result disputes.

READ ALSO: Register For Your Permanent Voters’ Card With These Simple Steps

About 22,120,458 Kenyans both in the country and the Diaspora, registered and voted during the Kenyan General Election.

In the just concluded election, Deputy President, William Ruto, defied all odds by winning the polls.

Mr Ruto won the election with 50.5% of the total votes cast while his closest opponent, Raila Odinga won 48.8% of the votes.

According to the head of the Kenyan electoral commission, Wafula Chebukati, the election was free and fair.

Meanwhile, a free and fair election in Nigeria is usually boasted of only when talking about the June 12, 1993 election that saw late MKO Abiola contesting.

This means that a free and fair election is one development Nigeria yearns as elections in the country are usually marred by rigging, violence, killings and the likes. But the Kenyan 2022 general election was without such developments.

Although some members of the Kenyan electoral commission, Independent Electoral and Boundaries Commission (IEBC) claimed the election was rigged, only little evidence, if at all, are there to substantiate such claims, unlike in Nigerian elections where you find glaring pieces of evidence.

Note that for the purpose of this report, we shall focus more on the presidential elections in both Kenya and Nigeria.

Kenya- 5 years and multiple times; Nigeria – 4 years and only twice.

Presidential tenures in both Kenya and Nigeria have limits. However, while the term of office for the president in Kenya is 5 years at a time and allows for multiple chances at re-contesting, in Nigeria, a president’s tenure lasts only 4 years after which such a person can contest again for another 4 years only. So, ultimately, a president in Nigeria has 8 years while Kenya’s president can be for life time if such a person keeps contesting and winning elections.

One of the novel introduction into the electoral system in African politics is by Kenya. The East African country now takes the lead among all other African Countries by  allowing Diaspora citizens to partake in electing their leaders.

Kenyans who live outside Kenya now have the franchise to decide who becomes their president. They can vote during elections, though only for the president.
Diaspora Kenyans can only vote from 12 countries chosen based on the number of Kenyans who live there. The countries are: USA, Canada, Tanzania, Uganda, Rwanda, Burundi, South Africa, South Sudan, Germany, United Kingdom, Qatar and the United Arab Emirates.
A total of 10,444 Kenyans in diaspora voted during the election. That is wide enough to be the deciding votes that could win a candidate the election.

The CBN said out of the now, over 200 million population, more than 15 million Nigerians who live in the diaspora pay an estimated $25-billion in annual remittances.

Sadly, this over 15 million Diaspora Nigerians are always disenfranchised as they have no decision-making power during elections. Unlike Kenya, they cannot vote to elect their choice leaders from outside Nigeria. Consequently, any Nigerian that lives outside Nigeria who wishes to partake in electing leaders in the country must travel back to Nigeria for voter registration and verification. After those, he or she must partake in other preparatory electoral processes as well as be in the country to cast his or her vote on election days.

IT becomes disheartening that a population as large as 15 million has no say in deciding who becomes their country’s leaders despite making huge contributions of about $25 billion to the country’s Gross Domestic Product (GDP).

While section 137 stipulates qualification for a president in Kenya, Section 22 of the Elections Act, 2011 and Regulation 47 of Elections (General) Regulations, 2012 stipulate that a presidential candidate in Kenya “must be a holder of a degree from a University recognized in Kenya.”

Section 131 of the Nigerian Constitution as amended states as follows:

“A person shall be qualified for election to the office of the President if – he has been educated up to at least School Certificate level or its equivalent.”
So, the current Nigerian president tendered his WAEC certificate as his qualification for contesting presidency. Although many Nigerians have continued to criticise the president for allegedly tendering a fake WAEC certificate, though this remains to be proven by a competent authority. Nevertheless, critics argue that the quality of a person’s education may decide the quality of his leadership. Hence, the poor indices by Nigeria in many sectors are blamed on the president’s poor presumed limited educational qualifications.

4. Prisoners can vote too:

Another novel provision of the Kenyan electoral system is the constitutional provision for prisoners to vote during elections.

Though prison inmates in Kenya can only vote during a presidential election. So, in the just concluded elections, about 7,483 inmates expectedly voted. But this is not so for Nigeria.

Although the Nigerian Constitution does not specifically prohibit convicts in Nigerian prisons from voting. However, prisoners in Nigeria have always been disenfranchised during elections as Nigeria’s electoral commission, The Independent National Electoral Commission (INEC) does not make provisions for prisoners to exercise their franchise.

The Nigerian Senate passed a resolution at its plenary on 8th March 2022, calling on INEC to allow duly registered and eligible prison inmates to vote during all general elections in Nigeria. The Senate also urged INEC, in collaboration with the Nigeria Correctional Service, to locate voting centres at custodial centres across the country to be used for voting by inmates.
So, while Kenya has already begun allowing prisoners to vote during elections, Nigeria is just about adopting that.

One good thing about Kenya’s electoral system is that it makes provision for political inclusion and gender equity. Hence, according to IFES FAQ on the 2022 Kenyan elections, “Kenya’s legal framework includes firm principles of gender equity.

According to the 2010 Constitution, no more than two-thirds of the membership of any elective body in Kenya may be of the same sex. In this respect, the National Assembly reserves 47 seats for women and the Senate reserves 16 for women, with two more Senate seats reserved for women representing youth and persons with disabilities.”

Kenya also believes in balancing of gender in elective positions hence, the head of the country’s electoral commission, Wafula W. Chebukati is a man while the vice chairperson, Juliana Cherera is a woman.

Also, out of the seven members of the Independent Electoral and Boundaries Commission, two are women.

However, the Nigerian National Assembly, on Tuesday, 1st of March, 2022, rejected five (5) gender equality bills that sought to alter the Constitution to provide more opportunities for women.

The bills sought to do as follows:

Sadly, the national assembly dominated by men rejected these bills.

6. Specific date of election as stipulated by constitution:

It is sacrosanct in Kenya that elections must hold in August of the election year.

The constitution of the country clearly stipulates this in section 59 of the electoral act. It says that elections in Kenya must be held on “the second Tuesday in August, in every fifth year.”
This constitutional provision makes elections dates known in Kenya.

However, in Nigeria, it is not so. INEC decides when Nigerians hold elections. Since the date is not sacrosanct, we have seen INEC postpone election dates many times.

Another novel provision of the Kenyan electoral system is the provision for an independent candidacy. This means that a person can choose to contest for presidency in Kenya without being a member of any political party in the country. Although this is provided that the person is nominated by not fewer than two thousand voters from each of a majority of the Counties.

Conversely, in Nigeria, a person vying for any political position in the country must be a member of a political party.

The constitutional provision and lack of provision for an independent candidacy by both Kenya and Nigeria’s electoral systems, respectively, presents more opportunities and hindrances for the countries to get better leaders.

For instance, in actual sense, it is the political parties that make the first choice of leaders for Nigerians because parties much conduct primaries to choose candidates before the people can support whomever they choose.

So, any individual who could be qualified and not corrupt and who wishes to contest cannot do so except he or she joins a party and wins the primaries. But this is not so in Kenya.

8. Margin to emerge winner of elections:

Similarly, in Nigeria, a candidate must receive a majority of the vote and over 25% of the vote in at least 24 of the 36 states.

The Kenyan electoral system provides for 12 hours of election on election days. Elections hold from 6am to 6pm.

Conversely, in Nigeria, elections are only held in six hours. This clearly could result in many voters not having the chance to partake in the election process.

In Nigeria, the minimum age limit a person must be to contest the position of the president is 35 years. So, if you are below 35, you cannot contest for president. So, the saying that “youths are the future leaders of tomorrow” is a hoax for Nigerians below 35 who may want to be the country’s president.

Also, the age a person can become Vice President in Nigeria is also 35;  to be a senator, 35 years.  30 years to be a State Governor, and 25 to be a Representative in parliament or Member of the States’ House of Assembly.

In Kenya, the minimum age limit to run for president is 18 years. The Kenyan Constitution does not have an upper presidential age limit.

This is a sharp contrast to the Nigerian minimum age limit. With this provision, youths can become president of Kenya. In this development, youths can truly be the leaders of tomorrow.

Although the countries do not have maximum age limits, it is a common occurrence in both countries to find governments by gerontocrats.

However, the winner of Kenya’s latest presidential election is 55 years why Nigeria’s current president is 79 years.

5 Ways You Can Prevent Cyber Attacks In 2022