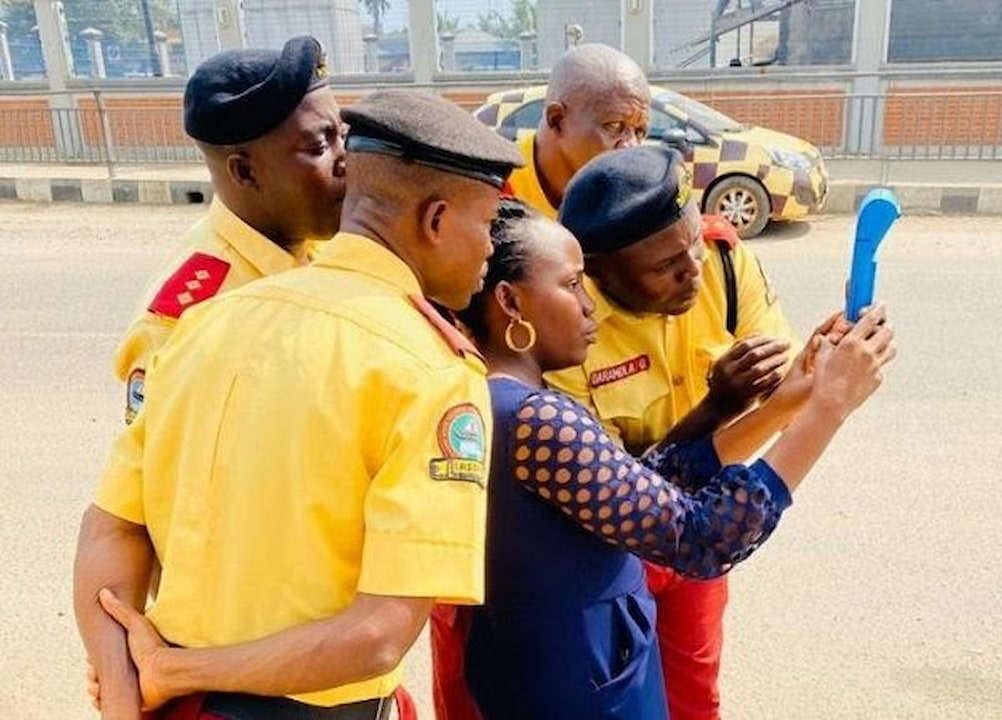 What is a TMS?

TMS means Traffic Management Solutions (TMS). It is a technology platform that provides solutions for all traffic related matters.

TMS devices are hand-held and look like a Point-of-Sale (POS) machines.

Traffic officers use TMS to professionally maintain compliance to, and enforce traffic laws in a courteous way.

TMS captures real-time traffic violations and incidences and then process the data.

TMS also educates the public on available traffic laws and their fines as well as the traffic rights of commuters.

Road users can report “faded road markings” which position everyone as a potential change maker in the traffic situation.

Why TMS in Lagos?

Lagos, though not the largest state in Nigeria in terms of land mass, is one of the most populated.

Because of the population, many businesses have their headquarters or outlets in the state.

Meanwhile, despite the small landmass, many of the residents own cars.

Consequently, there are always serious traffic congestions across the state on daily basis.

Sometimes, the traffic gridlock lasts for many hours.

Other times, the gridlock in some places can take days to clear.

For this reason, many road users would try to cut corners and in the process, worsen the case.

Moreover, road users who cut corners endanger the lives of other road users, as well as theirs.

Meanwhile, these acts and related ones constitute recognised traffic offenses in the state and incur punishments.

However, many challenges have bedeviled the enforcement of the punishments for traffic offenses in the state.

The enforcement of the punishments has been fraught with corruptions and bribery.

While some traffic offenders offer inducements, corrupt traffic officers collect the bribes and set them free.

However, the Lagos state government has introduced the technology to further curb this trend.

The TMS introduction is part of Governor Babajide Sanwo-Olu’s administration’s goal of turning Lagos to a smart city.

“It is Governor Babajide Sanwo-Olu administration’s goal to modernize operations and simplify enforcement by eliminating situations that facilitate impediments and cause counterproductive results on roads.”

Lagos state Commissioner for Transportation, Frederic Oladeinde, made the statement during a news briefing at the capital, Ikeja.

According to him, the smart traffic decongestion technology will help traffic officials do their work seamlessly and transparently.

Many uses of TMS in Lagos:

Oladeinde revealed that TMS will introduce transparency in the whole process of tracking traffic offenders and in collecting fines.

It will aid “eradication of fine payments controversy between the traffic law enforcement officers and violators.”

He added saying “only electronic payments guarantee the clearance of a violation from the violator’s lists.”

Oladeinde also noted that the technology will help solve the traffic gridlocks that always occur in the state.

He said “TMS is a traffic law compliance initiative that allows the real-time capture of picture and video evidence of road traffic and vehicle compliance violations as they occur with the use of handheld devices.”

“In line with the Smart City status of the state, this innovation will align with traffic management structure on traffic law violations.”

He held that the initiative will also aid “compliance checks” to track down motorists with fake number plates and licenses.

He said TMS will simplify “electronic verification of the authenticity of drivers’ licenses, vehicle licenses and number plates.”

Oladeinde said this will “assist in achieving the goal of clamping down on motorists with fake licenses and number plates.”

The commissioner added saying TMS will help in the “resolution of the perennial traffic gridlock issues caused by traffic violations within the state.

How TMS work in Lagos:

The TMS devices are linked to control rooms where every traffic activity are monitored and captured.

Traffic officers use TMS devices to capture offenses and send them to the rooms for processing and review.

The control rooms process and review the offenses to know if they are valid.

The control rooms save the processed data for references as well as for future recall.

Then, the control centres send electronic notifications immediately to the offenders’ phone numbers.

Remember that car owners in the state register them with the state’ appropriate agency to ensure their road worthiness.

Also, phone numbers are filled in the forms during car registrations.

So, the notifications from control rooms alert the offenders of their offenses.

Alerts may also contain links to enable them view the stored video and picture evidence of the violations.

The offenders can check their offenses on the TMS websites or through the TMS app.

Only prescribed Lagos traffic officers will carry the TMS decices about while on duty on the roads.

Personnel of the Lagos State Traffic Management Authority (LASTMA) will carry them.

Also, personnel of the Vehicle Inspection Office (VIO) too will have them.

What happens when an offender is caught?

When an offence is captured, the traffic officer issues the offender a receipt.

This is after the process and validation of the offense is done.

The offender then proceeds to pay the fine immediately or within 48 hours of issuance of the notification receipt.

Offenders must make payments via online on a designated website, the TMS mobile app or other prescribed means.

However, the offender may decide to approach the Traffic court to challenge the verdict.

An  offender has two options:

Oladeinde said offenders who are caught for traffic offenses have two options.

One is, the offender may challenge the allegation in a court for Traffic offenses.

The second option is for the offender to simply pay the fine for his offense.

TMS has both a website and a mobile App.

TMS also has an “Eye Witness” feature on the Mobile App which allows the public to report officers’ misconduct,

They can also report faded road markings and any other situation that may obstruct free traffic of cause accident.

Road users and any Lagos resident can download the app from Google Play Store.