According to recent reports, Nigeria offers one of the cheapest yet least affordable internet in the world.

This claim, although convincing is, however, a far cry from a 2019 report by UK-based price comparison website – Cable.

Then, Cable ranked Nigeria 11th of 57 African countries with the cheapest internet in the world, putting the country’s average price per 1GB data at $2.22.

Although mobile data keeps getting cheaper in Nigeria, the case is not the same for affordability as proven by Digital Quality of Life Index.

The virtual private network firm takes a look at the mobile data index of 85 countries from a different perspective based on affordability.

Although the outcome of the report is not necessarily surprising, Nigeria ranked 85th of 85th countries with the least affordable mobile data.

Surfshark measured the earning capacity for a gigabyte (1GB) of mobile data relatively to the average hourly income in the countries that were studied.

Compared to the global average of 10 minutes, the report indicates that an average Nigerian will have to work for about 27 minutes 55 seconds to afford the cheapest 1GB of mobile data.

To afford the cheapest broad plan, Nigerians are expected to work for at least 33 hours, 42 minutes where the global average is pegged at 3 hours 48 minutes.

By far, this seemingly setback can be attributed to the very low national minimum wage for federal workers which only rose to ₦30,000 in 2020.

According to Surfshark, five main pillars determine the Digital Quality of Life (DQL) in any country and they include the following:

Internet affordability – indicating how much of time people have to work in order to afford internet connectivity.

Internet Quality in terms of speed and stability; Electronic Infrastructure, in terms of development and inclusiveness among citizens.

Lastly, a nation’s DQL is also determined by how digitized a country’s government is and of course, how safe and secure the citizens can feel.

Nigeria did not meet up with the average ratings for most of these pillars, hence, ranked 85th on the list of countries with DQL.

The likes of Tunisia, Algeria, Morocco, and Kenya, although not very commendable, ranked 64th, 66th, 71st, and 74th respectively.

The research attributed the poor DQL in majority of the 85 countries studied to high inequality in affordable internet. 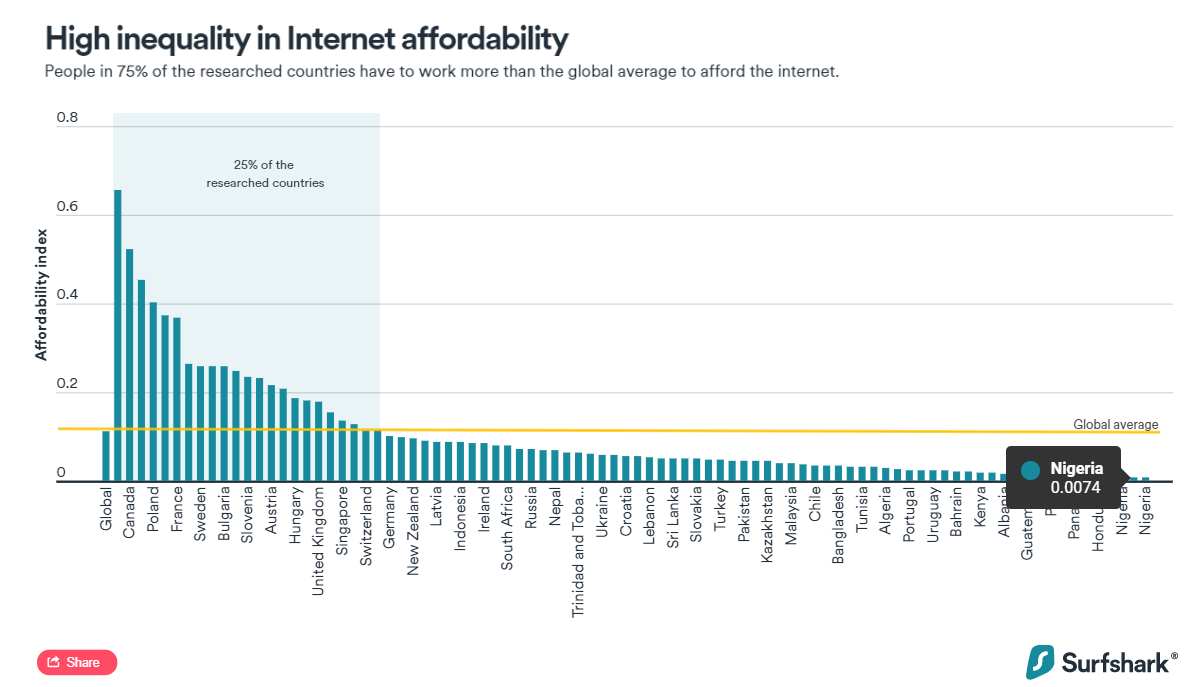 According to Surfshark, 75% or 63 of the researched countries including the above mentioned have to work more than the global average to afford internet.

“Any country’s digital advancement has a tangible relation to its economic potential and population’s overall wellbeing. In the COVID-19 era, it’s even more important as most of the employees face working full time online,” says CEO of Surfshark, Vytautas Kaziukonis.

“Since work from home realities vary widely by location, Surfshark’s research on internet affordability and quality aims to establish a common ground for further conversation.”

Broadband network is undoubtedly one of the primary indexes of development in all aspects of life and even a nation.

And while access to broadband network is top priority for a technologically-driven society, many nations are making aggressive efforts to deploying both human and material resources to attain success in that regards.

While Prof Danbatta sees broadband as a key function of an ecosystem, his keen interest in seeing a turnaround in that area has never been flawed.

The NCC EVC has subsequently leveraged his crack team of experts in successfully ushering in a regime of efficient management of scarce resources and spectrum.

Amongst other achievements, the NCC successfully auctioned six slots of 2×5 MHz in the 2.6GHz band, in order to re-plan the 800 MHz band fot LTE, as well as to assign 2×10 MHz spectrum to Glo mobile for trial in the 700MHz.

Also, MTN and Airtel benefited significantly in terms of regularization of the f 2×10 MHz Spectrum in the 700 MHz band that was previously assigned by NBC for the purpose of providing LTE services.

The Commission also opened up 70/80 GHz band for both last mile and backhaul services, among several other spectrum management that have since boosted broadband penetration in the country.

In the most recent development, the Commission unveiled a 5-years (2020 to 2025) National Broadband Plan that will ensure the achievement of new goals and objectives. 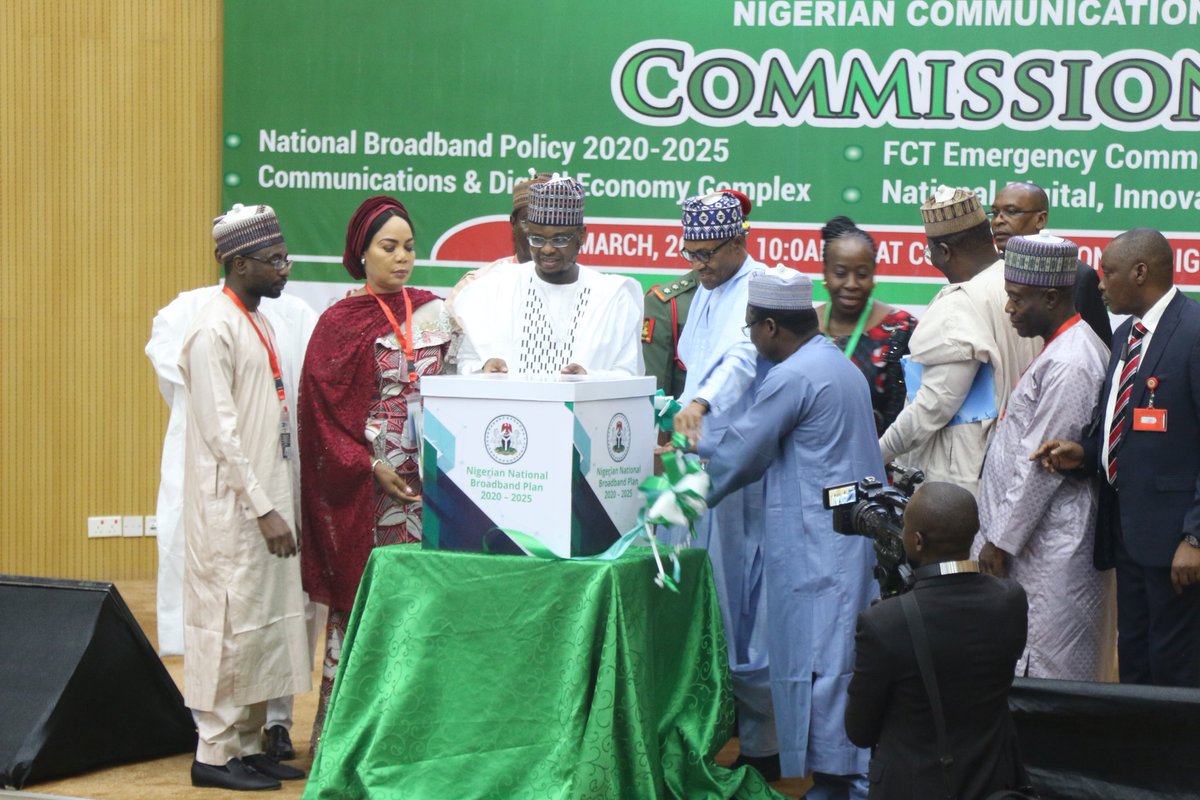 Among other things, the plan is designed to deliver data download speeds across Nigeria of a minimum 25Mbps in urban areas, and 10Mbps in rural areas, with effective coverage available to at least 90% of the population by 2025 at a price not more than N390 per 1GB of data (i.e. 2% of median income or 1% of minimum wage).

The Commission, in order to achieve the above ambitious target, will focus on four criteria pillars including infrastructure, harmonized policies, demand drivers as well as funding and incentives.

Although, these and many more initiatives are pointers that the communication sector is strategically driven, there’s much more to be done to achieve the desired digital quality of life.

Many economies across the world are driven by improved standard of living made possible by productive labour and efficient policies.

In the same vein, productivity in labour is driven by specialization, technological innovation, and working capital among other things.

More so, a lot of businesses, corporate organizations and individuals greatly rely on internet accessibility to function at their full capacity.

While this access comes at a great cost for many, they are able to scale through majorly because of their financial sufficiency; However, there are several others who have to face financial constraints to go by.

As said earlier, it will take an average Nigerian no fewer than 33 hours, 42 minutes of work time to afford a gigabyte data of broadband network.

While this might not be applicable to all citizens, its negative implication on internet penetration is unlimited as there are millions of Nigerians who would prefer to meet other basic needs like food and health over having access to the internet.

This subsequently determines the digital quality of life of a nation as well as how healthy a nation’s digital economy can thrive.

Related Topics:Digital Quality of LifeFeaturedInternet PenetrationNigeria Broadband Network
Up Next

ANALYSIS: CBN’s ‘Buy $1 Get ₦5’ Scheme And Its Economic Impact So Far

Jumia Glides Towards Profitability As Losses Dropped By 34% In 2020