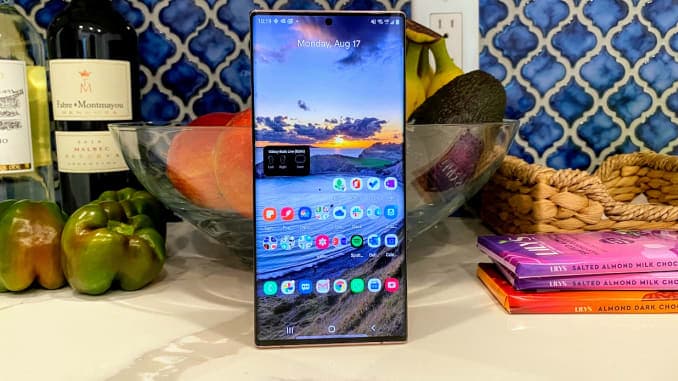 The Samsung Galaxy Note 20 Ultra launched in August as one of the year’s flagship device.

Samsung, as usual, has always ‘saved the best wine for the last.’

Again, this is evident in the latest addition to its Galaxy Note series.

Imagine an Xbox, a desktop PC, and a compelling camera packed in one device.

Across various sites, the device is rated above 4-stars in most cases. For us, the device gets an overall grading of 4.5 stars.

Thanks to its amazing features and overall design. 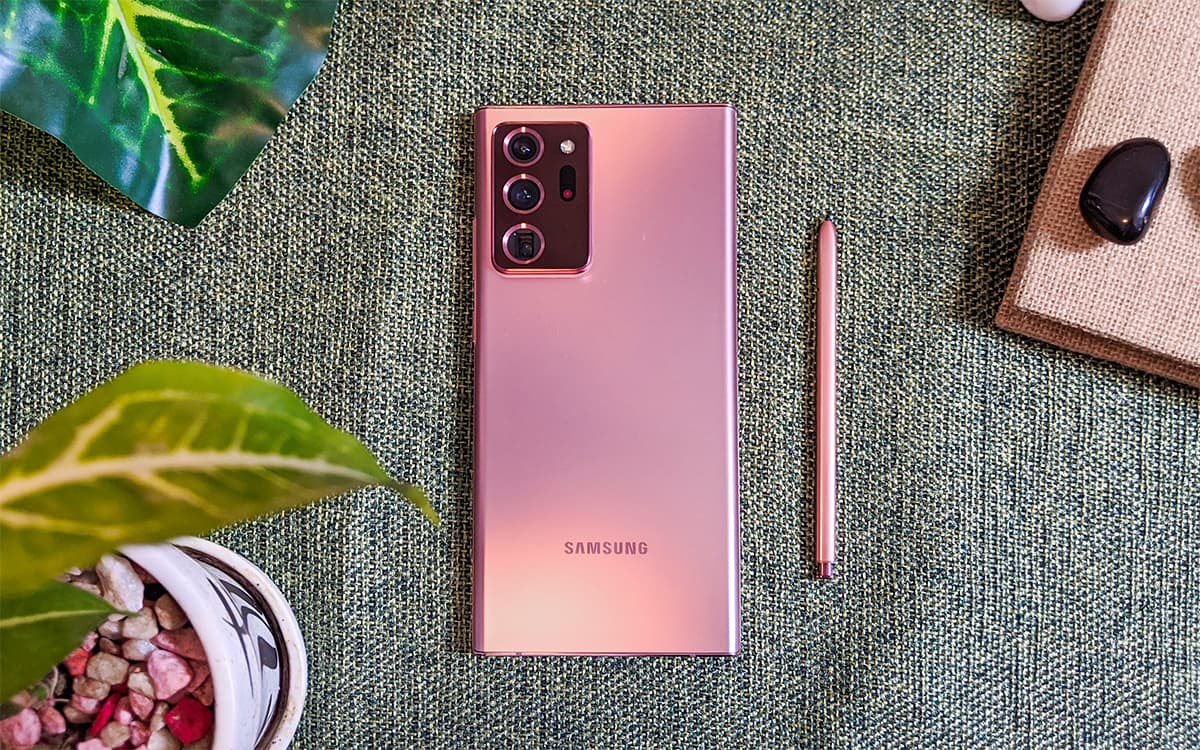 On the contrary, the device got a series of backlashes, mainly because of the battery issue.

There are other complaints attributed to the device Exynos chipset and Near Field Communication (NFC).

According to many people, the ARM-based system and the NFC-technology are primarily responsible for excessive battery-drainage.

Allow us to properly walk you through our review of the Galaxy Note 20 Ultra.

The Galaxy Note 20 is certainly BIG for a Smartphone. It would take two hands to operate conveniently.

What’s responsible for the big size? The Note 20 Ultra features a 6.9-inches screen; the same screen-size found on the S20 Ultra. 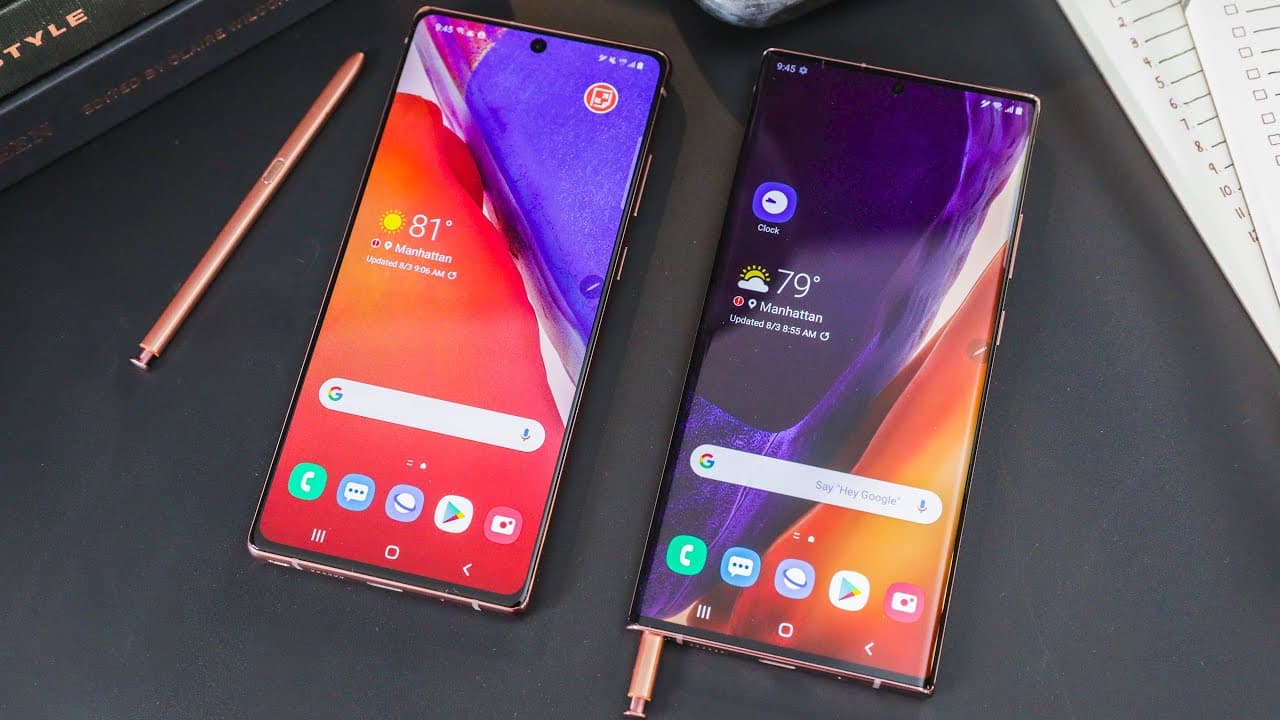 So what makes the Note 20 Ultra different from the S20 Ultra? The most obvious difference here is the S-pen, and maybe a couple of other exceptions.

Also, the Note 20 screen is curved towards both sides of the device. This is, however, a common trait among Samsung’s flagship devices.

With the curved-screen, you would feel the device’s display on the edges of your fingers.

Aside from the large screen, the Galaxy Note 7 has a pretty exterior.

This time around, the Note 20 Ultra exterior is more defined than its predecessor. Kudos to the design team!

On the back-side, the device features a trio-camera setup. Alongside this, there is a laser auto-focus sensor, as well as a single flashlight.

ALSO READ: How to Retrieve Deleted Photos on Your Android Device: 6 Stressless Steps

Looking towards the bottom of the Note 20 Ultra, you’d find pretty much the same old design.

The device still features a mouthpiece, Type-C charging port, speaker outlets, and of course, an S-Pen.

All positioned on the right side; there is the power button and the volume keys above.

Overall, the exterior design of the Note 20 Ultra is more impressive than its predecessors.

Factually, it’s the first time in a while that Samsung is making a significant revamp on its Note series.

The Note 20 Ultra also adds the fastest refresh rate yet. 120Hz refresh rate. According to Samsung, this is their first device to possess that ability. 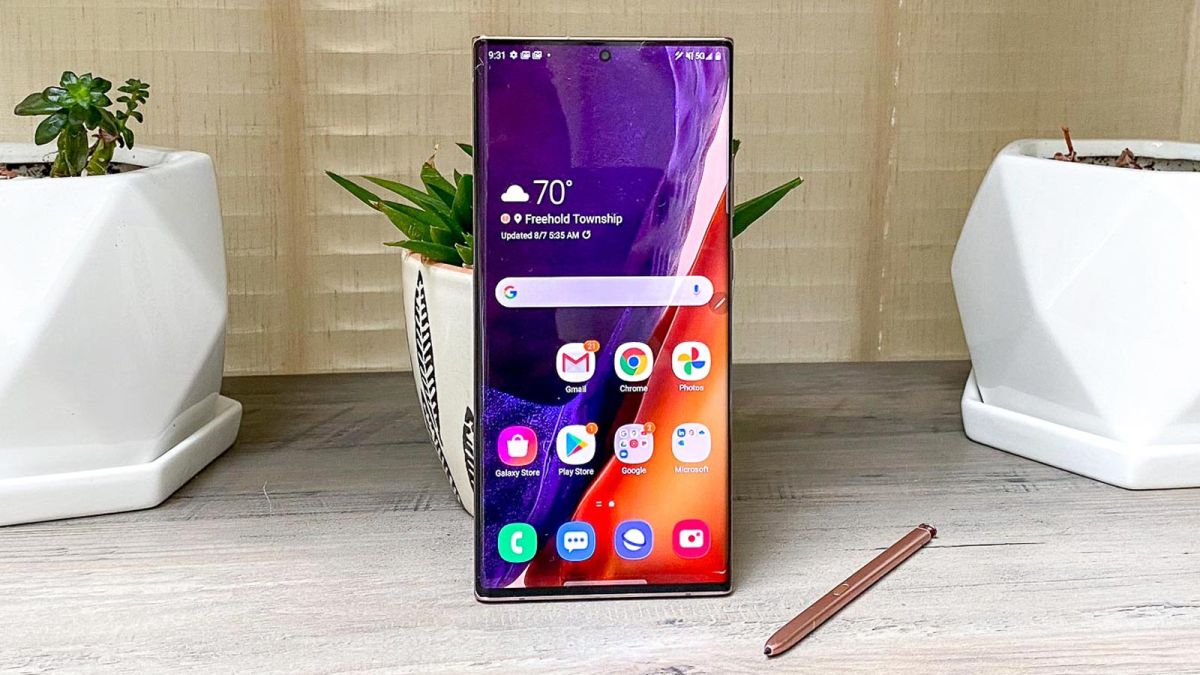 With the high refresh rate, scrolling through the device feels easy and user-friendly. This is even more evident when the Adaptive motion is turned on.

There is one more important thing to state. The refresh rate automatically adjusts depending on the content on the screen. This happens mostly when the Adaptive motion is turned on.

However, the downside to this is that the feature is battery-draining.

Hence, you don’t want to set your refresh rate to 120Hz manually.

If you really care about your battery life, stick to the 60Hz refresh rate.

Still, on display, the Note 20 Ultra’s panel is very bright.

This makes reading on the screen when outdoors a lot interesting.

Also, there is an alternative Face-ID technology, which, according to Samsung, is more accurate.

Other than the above, users will still have to make use of a personalized security code.

This gives you overall access to every other security lock system.

One of the major highlights of Note 20 Ultra is the camera specification.

Beginning with the rare camera setup, there is a 108MP wide-camera with an f/1.8 aperture.

There is another third camera – a 12MP telephoto lens that is capable of delivering a 5X zoom. 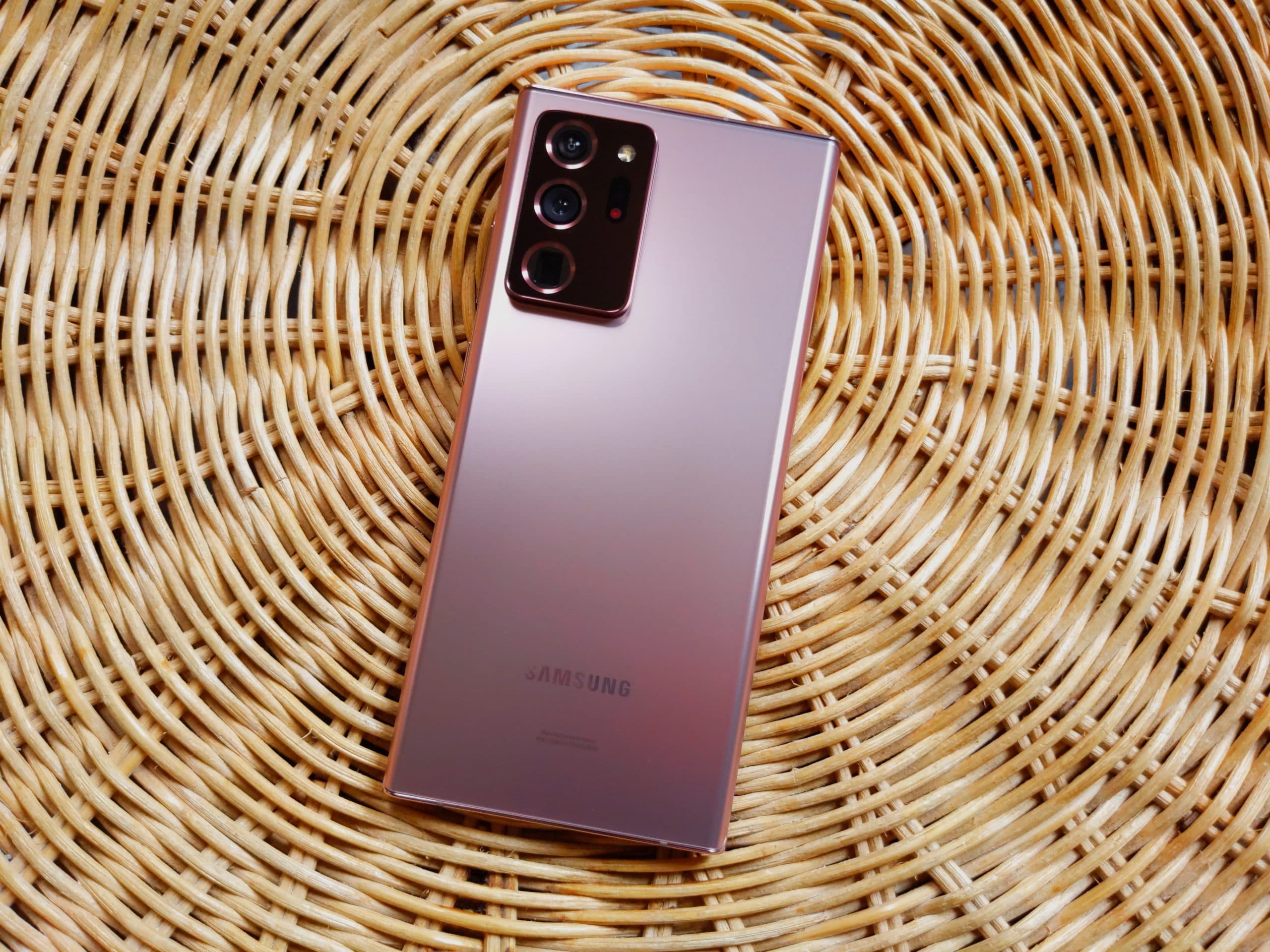 Not just that, the telephoto lens can as well deliver a 50X super-resolution zoom. How amazing!

Still, on the rear camera setup, Samsung included a flashlight and a laser auto-focus sensor.

According to the phone maker, this will mainly address the vast complaints about focus.

Trying out the device, we discover that the focus is quite better and more accurate.

Another exciting part of the camera is the 50X zoom. You can get to see images about 400-Mtrs away clearly.

However, once hit the 30X zoom up to 50X zoom, images start to get blurry.

Regardless, better than what we envisaged, the Note 20 ultra zoom ability is yet unmatchable.

On the front side, the Note 20 Ultra features a 10MP selfie camera with f/2.2 aperture. The front camera, more than ever, is clearer and can perform better at coverage.

The Note 20 Ultra houses a Qualcomm Snapdragon 865+ processor. This may, however, differ with the 5G model, which comes with an extra power draw.

Also, the Note 20 Ultra comes with a base RAM of 12GB, enabling ease of multitasking. At this capacity, the device can handle assorted tasks like shooting and editing 4K videos. 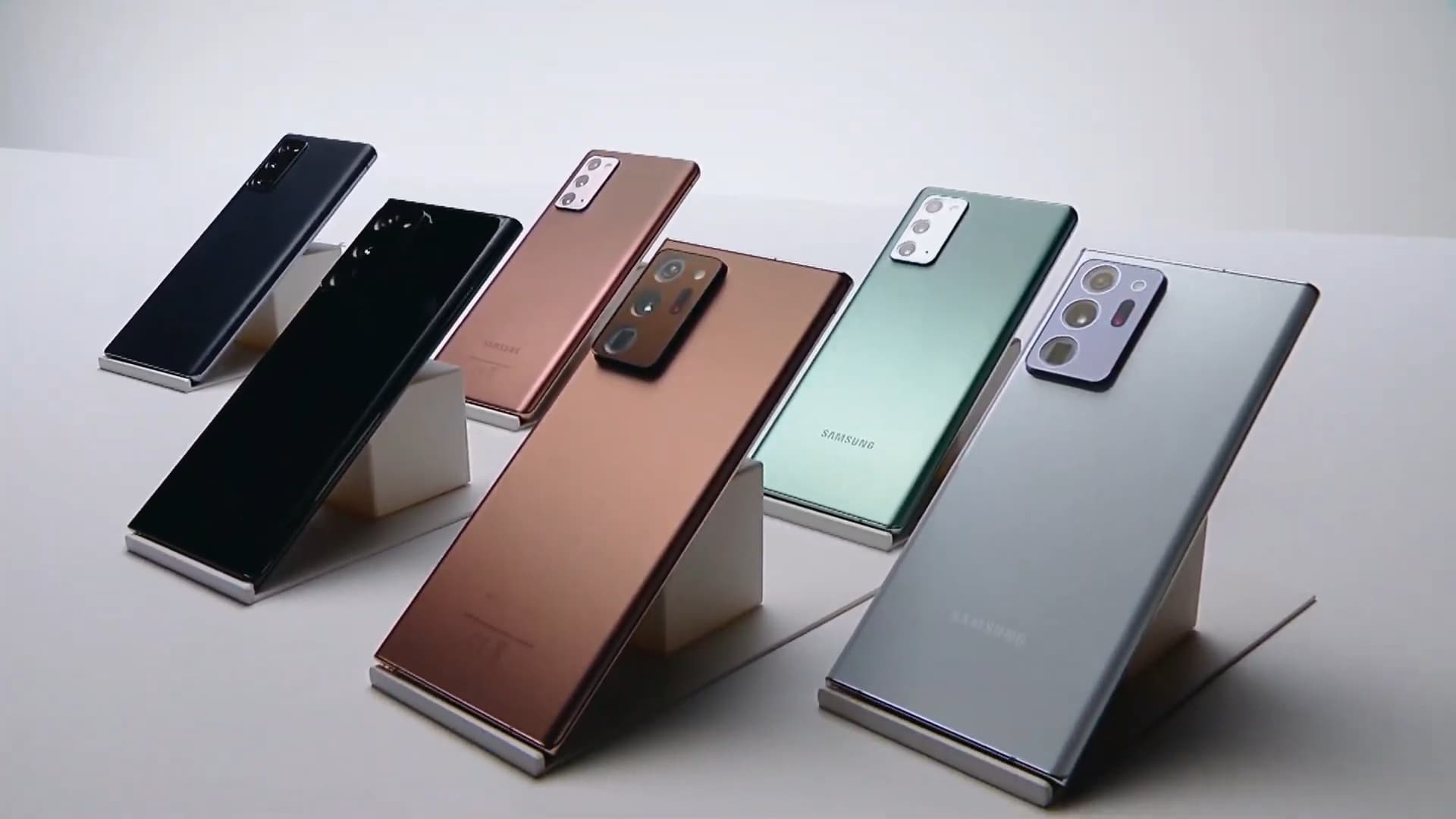 As for the storage, there are two variations starting at 128GB. Depending on what’s affordable, you can get a model with up to 512GB storage space.

Mind you, regardless of which model you chose, both storages are expandable with an SD-Card. As such, you can get up to 1TB additional storage space.

Across the board, the Note 20 Ultra hits a multi-core performance score above most Android devices. However, at 3,295, the device scored below Asus ROG Phone 3, which has the same processor.

We also discovered that the Note 20 Ultra could sometimes heat-up when undergoing the tedious task. The reason for this, however, cannot be far-fetched.

A teardown review of the device revealed that the phone uses a multi-layered graphite thermal pad as its cooling system.

This is slightly different from what we had on the Note 10 with less heating complaints.

However, giving the fact that the Note 20 Ultra is more capacitated, it’s hard to tell which is better.

Regardless, you can expect a device with up to 12GB RAM to exhibit such a trait. Of course, when put to hard-core usage.

The S-Pen is the only feature that outrightly differentiates the Galaxy Note series from others.

This aspect will address a general opinion – why Samsung Note 20 Ultra where there is S20?

For clarification, aside from size, the Note 20 Ultra is built for more corporate purposes.

You will also agree that there are a couple of features dedicated to the Note-Series.

One of such dedicated features is the Stylus Pen (S-Pen). According to Samsung, the latency on the S-Pen has been reduced even further to 9ms.

This speed can be attributed to the device’s higher refresh rate screen at 120 Hz.

In addition to that, Samsung equipped the Note 20 Ultra with some predictive machine learning.

This, Samsung says, will enable the screen to predict the stylus movement ahead of time.

When we tried out the S-Pen, unlike the formal, it was more adaptive to the screen. Also, it responded faster and, of course, more accurate.

While other upgrades come with S-Pen, most of them are software-based.

For instance, Samsung added what it called ‘Live sync.’ According to the phone maker, this will allow written-notes to save to the cloud automatically. 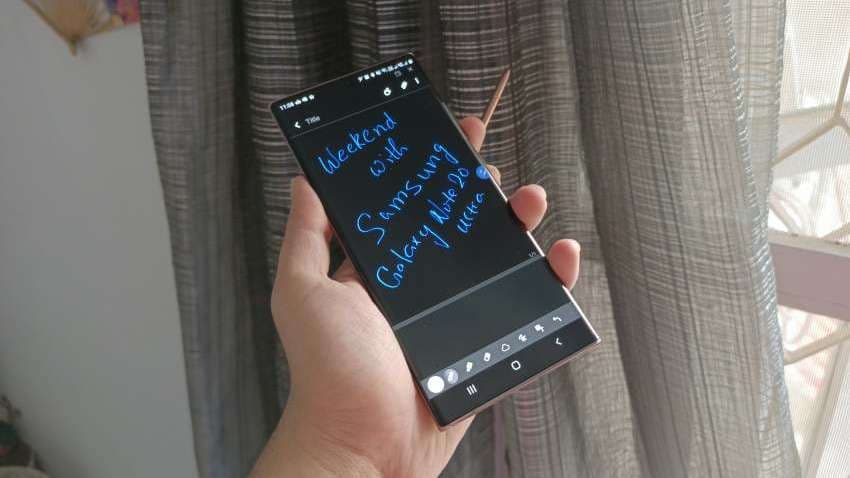 This way, users can access all notes from across any other devices.

Samsung has also made it possible for the device to time-sync user’s notes alongside voice recordings.

This way, you can hear a statement that was made the moment you scribbled a note.

Finally, on this aspect, the Note 20 Ultra can help realign users’ handwriting (if it’s BAD). That way, it can be converted to text and played back as audio from the moment it’s been written.

ALSO READ: How to Retrieve Deleted Photos on Your Android Device: 6 Stressless Steps

Despite its upgraded capacity, Note 20 Ultra’s battery life is fair to a large extent.

Firstly, the device runs on a 4500 mAh battery. This is considered moderate for a device like this. Although far from expectations, we weren’t expecting anything lesser.

Samsung planted a 5000 mAh battery in its S20 Ultra. What’s responsible for the reduced capacity for Note 20 Ultra? This is despite its upgraded processor and RAM.

Only Samsung can give the correct answer to that question.

Juxtapose to usage; the Note 20 Ultra can last up to about 11-hours of active usage. This, however, depends on the task the device is made to execute.

A task like editing 4K video will surely consume more power. Even as such, when we gave it a try, we still got up to 6-hours of screen time after active usage.

The Note 20 Ultra mixes out from the previous 45W wired charging. However, Samsung replaced that with a new 25W fast-charging.

This enables users to tap some juice from someone else’s Qi-chargeable device.

That could also serve a purpose when you have to charge other wireless devices like earbuds.

We also discovered that the 25W fast charging was quite fast indeed. We discover that the device powered up from zero in less than 70-minutes.

A couple of users have raised several complaints about fast battery-drainage.

While this is relatively true, it could be subjected to varying reasons.

Amidst this concern, we have found two things majorly responsible for this setback.

First is the use of Near Field Communication (NFC-technology).

This mostly has to do with some specific service providers.

For instance, service providers like Vodafone usually have NFC turned on by default.

This, according to various findings, could be a major factor for a quick battery-drainage.

In that case, it is advisable to always have the feature turned-off on the device.

Another primary concern is the optimized processor.

Samsung, although maintaining the previous Exynos 990 chipset, boosted the Snapdragon processor from 865 to 865+.

Well, you may not come across this particular issue if you don’t overload your device.

The Note 20 Ultra is capacitated to execute heavy duties, and may significantly impact battery consumption.

To solve this, you must ensure that there is a stable power source.

At least, if you want to indulge your device in battery-consuming activities like editing 4K video.

Currently, you can get the device from any mobile phone retail outlet.

Or better still, visit the official website to place an order.

Why you should buy

Why you shouldn’t buy

The Note 20 Ultra is quite a good buy if you really don’t care about affordability.

In the meantime, Note 20 Ultra is one of the best high-end Android to beat.

Do you find this review very helpful? Kindly share with us your thoughts in the comment section below.

WeChat Gets An Impressive Amount Of Downloads In the U.S., Survives Sunday’s Ban

Apple Just Launched The New iOS 14: Here’s What You Need To Know About It