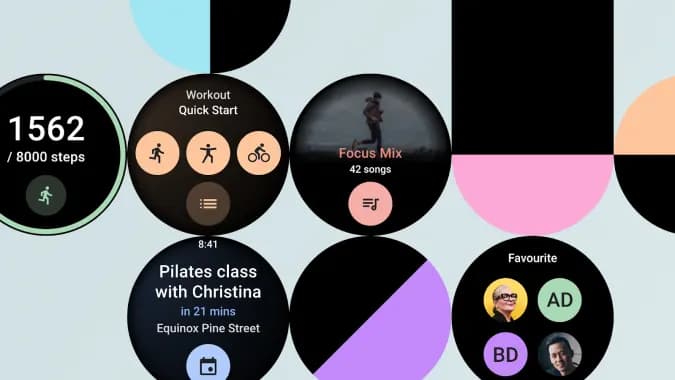 Google announced that it would now allow third-party developers to create custom Tiles on its Wear OS smartwatches.

This would allow users to have various Tiles to select from.

The Tiles added to the smartwatches were either from the manufacturers or Google itself, making it limited.

However, with the jetpack Tiles library introduced by Google, more Tiles would be available from non-developers (third-parties).

The library would enable the developers to create custom Tiles on Wear OS smartwatches.

This would be available to users when the Wear OS corresponding update takes place in spring.

Tiles were designed for many cases like tracking users’ daily progress, starting a song, starting a workout, seeing notifications quickly and sending messages to friends.

It makes everything faster, easier and focuses on users immediate needs.

Rather than opening an app to get information, Tiles makes users access apps easily.

However, if a user is interested in getting more information, the user can tap on Tiles to go directly to the app.

Since its introduction in 2019, it had become one of the most useful and needed features for users of Wear OS smartwatches.

The first set of Tiles to be introduced then includes Goals, Next Event, Weather Forecast, Heart Rate, Headlines and Timer.

It allowed users to access the latest events and news faster, know the weather forecast, their heart rate, time left on their timer.

They include Workouts, Weather and Breathe.

Alongside the introduction of Tiles in 2019, Google introduced a swipeable feature. Google discovered the necessity of adding swipes to its smart wears; hence, its decision.

This made users easily and quickly access anything they needed to see and do from their wrist.

The users could go left or right, trying to access Tiles of their choice.

What would this mean for Wear OS?

Interestingly, enabling third-party developers would be a favourable update for Wear OS.

Over months, Wear OS has lacked a lot of attention from its owner company; only small updates had been shared on the platform.

From now on, this might change online controversies on Google ignoring the smartwatch.

As a result of its acquisition of Fitbit,  Wear OS has not had any major update on the device.

Also, this might be another strategy to clear the doubt.

The ‘Hey Google’ feature was an existing Google assistant, too, before it suddenly went missing.

What You Should Know About NIBSS’ Newly-Introduced NQR Merchants App

Nigerians Will Now Pay ₦6.98 For All USSD Transactions