Twitter co-founder, Jack Dorsey, has appointed three Nigerians and a South African to the board of Bitcoin (BTrust) trust fund.

He appointed the three Nigerians from among 7000 people that applied for the positions.

The three Nigerians are Obi Nwosu, Ojoma Ochai and Abubakar Nur Khalil while the South African is Carla Kirk-Cohen.

Jack took to his Twitter handle to make the announcement.

According to Twitter co-founder Jack Dorsey, the new board members emerged from a rigorous process that inspired him.

He also said that he employed them because they are purposeful.

Jack chose the four to distribute 500 Bitcoins which Dorsey and Jay-Z donated for Bitcoin development across Africa.

They will also be in position of deciding who among the applicants from Nigeria and India deserves to benefit.

BTrust is a Bitcoin trust fund which the Twitter co-founder established after resigning as Twitter’s CEO in November, 2021.

In February, Dorsey announced the BTrust in collaboration with rapper Jay-Z.

The trust fund will finance development in Africa and India.

Dorsey and Jay Z had previously announced their intention to give 500 BTC to set up ₿trust.

The endowment is to  fund bitcoin development with a starting focus on teams based in Africa and India.

Dorsey said they were appointed for being purposeful.

He said, “I’m so grateful for you all and so inspired.

“They’ll now work towards defining the operating principles as they think about how to best distribute the 500 bitcoin towards development efforts.

“A massive thank you to the working team that made this happen. 7,000 applications to these incredible four, all reviewed with purpose and rigor.”

Who Are the three board members in focus: 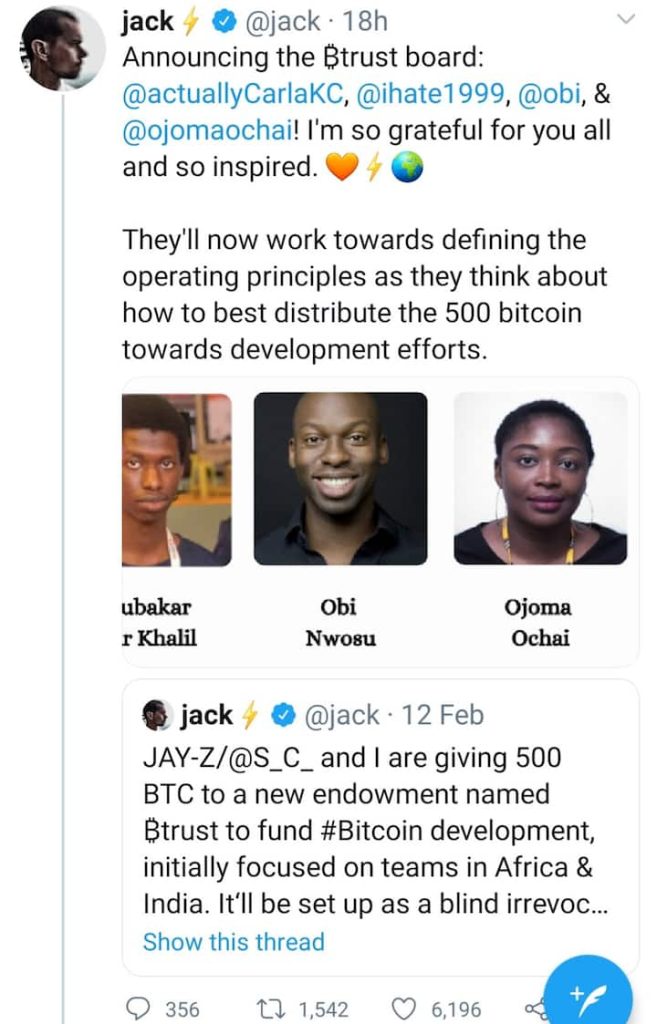 Abubakar Nur Khalil is a researcher and web builder based in Kaduna.

He is also the Chief Executive Officer of Recursive Capital, a firm that invests in the development of the web 3.0 ecosystem in Africa.

22-year-old Khalil is a Bitcoin Core Contributor on the African continent and started his contributions when he was 19.

Previously, Obi was the Founder and CEO of Supalocal and held senior roles at ebookers.com and WeeWorld, overseeing the development of a virtual currency, used by 30 million users.

“Thanks, @jack and the team. Super excited to be a part of this vision, organisation, and mission and to finally be able to talk about it,” Nwosu said while reacting to his appointment.

She worked in and with partners and teams globally, particularly across Africa and the United Kingdom for a range of organisations like British Council, UNESCO, World Bank (Growth and Employment Programme), Africa Technology and Creative Group (ATCG), and various governments in Africa and beyond.

You Can Now Preview Voice Messages On WhatsApp