These days, consumers are not easily persuaded by much smooth-talking. Plus, if you’re going to try and be smart with them, you might as well consider that they’re more alert than they’ve ever been and will be quick to call you out on your (fill in the words) once they spot it.

Verizon’s idea of saying, without saying wasn’t totally a bad one. But, as said, consumers have their manipulation sensors on at all times and will easily read your underhanded moves at a glance.

For quite some time now, Verizon has been relentless in its promotion of 5G phones. The company also spent a little above $45billion bidding for a C-band spectrum to improve its 5G Network.

However interesting this might sound for consumers, it also comes with certain downsides. Top of the list of those downsides will be battery drains.

You can’t have super-fast browsing and get the same amount of use time as usual. If that will ever happen, we’d be looking at a device from an entirely different price point. But, we’re yet to see any of that anyway. 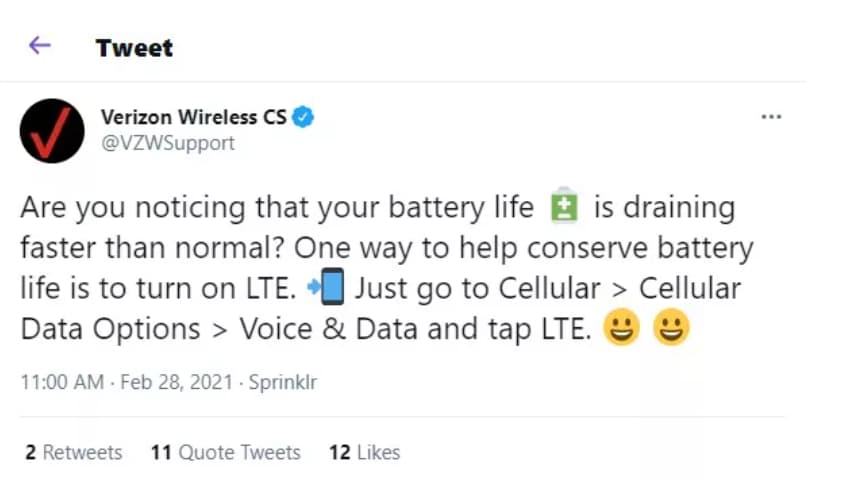 Following Verizon’s 5G promotions, consumers’ complaints of incredibly fast battery drains have reached the Verizon support team. Now, like every other support team, they were ready to provide help.

Only, they weren’t going to be straightforward about it, and understandably so.

The team knew that the cause of the battery drains was the 5G technology power demands. But, they had put so much marketing effort into selling the feature out to customers and weren’t going to water that down by highlighting it as a problem.

So, they decided to go with this duplicitous tweet on Sunday morning.

Then, it went further to show how users could do it on their smartphones. While this suggestion was helpful, some users found it tricky that Verizon conveniently left out that it boiled down to turning off 5G.

They received a backlash

After receiving a backlash from Twitter users, Verizon went ahead to delete the post. That singular action confirmed that the move was conniving and ultimately a wrong call. Things got a little more awkward later on.

It got a little more awkward

A Twitter user by the name of Pete S pointed to the dissonance between what the company had just said and its previous promotion. He said Verizon promotes new 5G ultra-speed phones. Also Verizon; hey turn off your 5G.

Verizon’s customer support team dodged the actual question in its response and redirected the conversation. They referred to speed issues and how they were trying to resolve them.

If the present concern had anything to do with the speed it would have been because battery drainage had been super-fast. The team knew very well what the concern was but decided to swerve.

It's important that we complete many troubleshooting steps to find the root cause of any issues with speed. We are quickly launching more 5G areas, and making updates constantly to improve speeds. If you have other questions or concerns, please feel free to follow and DM us. *ACA

Verizon might need to make up for this. The case already created some negative energy towards the brand.

If they would retain a percentage of customer trust then they might need to think up something and do it real quick.

Only this time, they have to do better and factor in the alertness of consumers to sneaky moves.

iPhone 12 Review: Worthy Buy or Not? Let’s Find Out