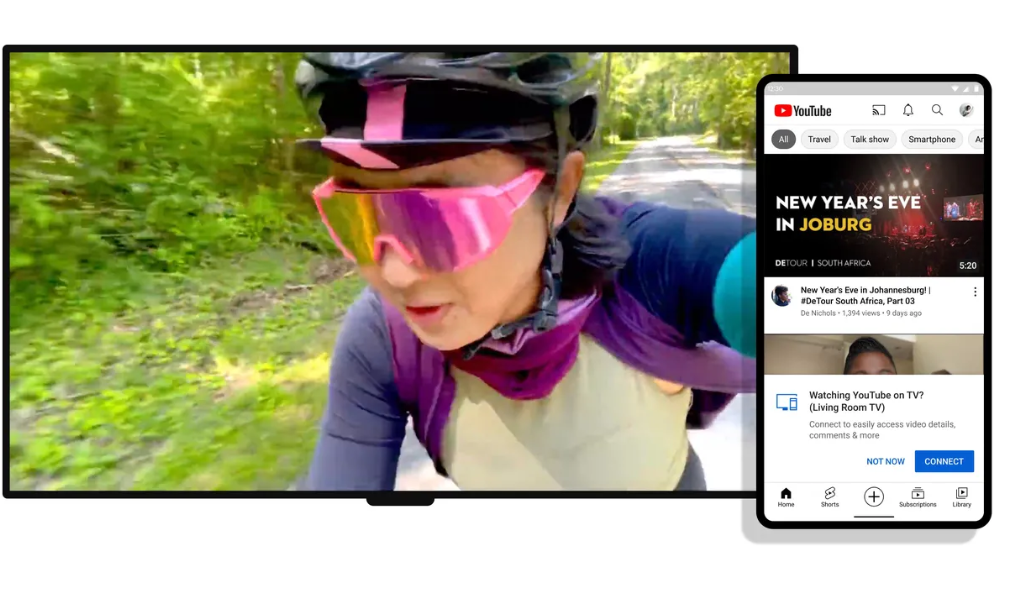 The Connect feature allows you connect your TV with your android or iOS phones.

This is more than just having your smartphone as a YouTube player on your TV.

With the new feature, you can stream you favourite YouTube videos from your phone to your TV.

The streaming service said its new connect feature is more than just a cast-to-TV option as it offers users more opportunities.

Remember how annoying you had to type with your TV’s remote.

Typing with them most times is not that cool.

According to Brynn Evans, the head of design for YouTube on TV, TV remotes suck.

“It’s very hard to type on TV with a remote.”

“Like, the remote’s clunky, every remote’s different, there’s a million different buttons. They’re all bad.”

The YouTube’s new feature helps users closely connect their phones to their TVs.

so, you have to open the app on your streaming device.

Then, open the YouTube app on your phone too.

When you open the app on your smartphone, you will get a pop-up asking if you’re watching YouTube on your TV.

You will also see a prompt to “Connect”

Meanwhile, once you click o the “Connect,” your phone will synchronize with your TV.

You can then watch your favourite YouTube videos from your TV’s screen.

The streaming service said you can do all these without even touching the remote of your TV.

It had said the feature would be part of it’s lineups for 2022.

Google, the parent company of YouTube, said as of January 2022, viewers streamed over 700 million hours of YouTube contents on TVs daily.

It said more than 80% of people  use other digital device while watching TV.

Google said many of the YouTubers open the same YouTube video on their phone to interact with it.

“The beautiful thing about this feature is there’s no protocols.”

So, you don’t need to worry that your TV does not support Cast or that your Wi-Fi has a different configuration.

This is because, it’s your YouTube account across devices that are syncing and not not even your devices.

“A lot of our content is made by creators,” says Evans.

Evans continued saying, “and they make this content so their community and their fans can really engage with them .”

“…there’s so much richness in the way our community is set up. None of that exists on TV today.”

According to the service, ” 88% of people watch TV with their phone in their hands.

With the TV Connect, you can see your comments on your TV screens, therefore, you don’t have to look to confirm your comments posted.

You can also see popular comments on a YouTube video from from your TV screen and equally react or respond to them.

This YouTube feature allows you multi-watch different videos at the same time on your different devices.

For instance, you could have a video playing on your TV, another on your laptop, and a third on your Nest Hub, and interact with them all in your YouTube app.

According to Kurt Wilms,  “We’re working towards that vision of having a truly connected living room.”

He added saying, “that will allow you to seamlessly move videos and engage with videos. Not just in your living room, but honestly, across your whole house.”

Travel Gadgets You Must Have In 2022