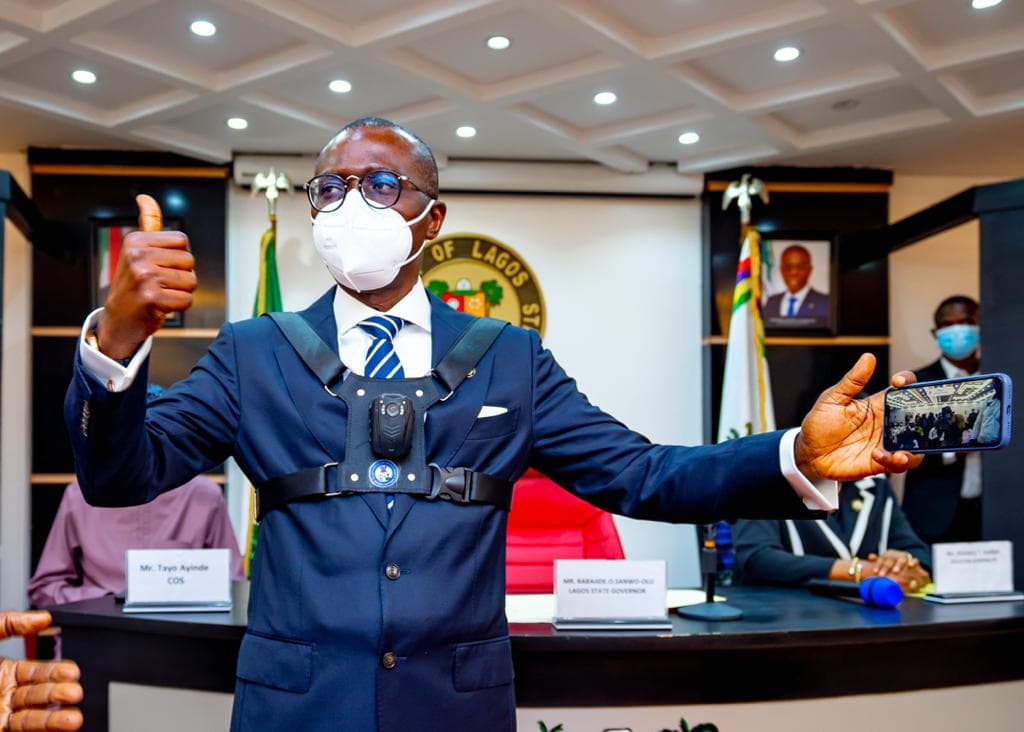 Barely 16 years after the first generation of ‘modern’ police body cameras were introduced, Lagos State joins the queue as it is set to adopt the security kit.

The State Governor, Babajide Sanwo-Olu, on Wednesday unveiled the body-worn cameras that will now be used by the State security agencies in its move to enhance safety.

Present at the unveiling event at Lagos House, Ikeja, were representatives of different security and Law enforcement agencies in the state. 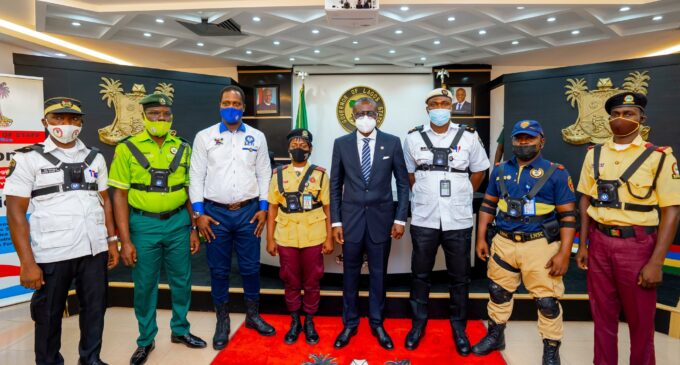 The Guardian: Lagos State Governor, Mr Babajide Sanwo-Olu demonstrating the use of body-worn cameras for the officers of the state’s Law Enforcement outfits during the launch at the Banquet Hall, Lagos House, Alausa, Ikeja, on Wednesday, March 31, 2021.

In his words, Mr. Governor said that “I am pleased to inaugurate the use of body-worn cameras by law enforcement officers in Lagos and this is a groundbreaking move to enhance safety in the state, as well as increase transparency and accountability in the activities of our law enforcement agencies.”

Of course, this is not the first time that the State government will be embracing digital solutions; however, this marks a major miles stone for the LASG security department.

Sanwo-Olu said that the use of body-worn cameras by law enforcement officers in the state will strategically push Lagos a step ahead of others, especially when the nation is battling its worst state of insecurity.

“The security challenges in different parts of the country are worrisome, but with proactive action, the use of modern technological tools, and a mix of well-trained and intelligent officers, we will successfully combat many of these challenges.

“With body-worn cameras, our law enforcement officers are better equipped to protect lives and properties, thereby, making Lagos safer for us all.”

How do we go from here?

While we await the full implementation of the new development, it appears a lot has to be put in place to ensure smooth functionality.

First, during the unveiling of the body-worn cameras, the state government also approved a three-day mass training for the state’s law enforcement personnel.

The training which is scheduled to take place in May ahead of the deployment of the digital security kit – according to Sanwo-Olu – will be facilitated by the state’s Law Enforcement Training Institute (LETI).

Sanwo-Olu believes the training will prepare law enforcement personnel ahead of the kit’s actual usage while enabling them to optimise its usage.

“I am hopeful that all officers will optimise the cameras that will be assigned to them for the furtherance of justice and improvement of the law enforcement process.

“Our government will continue to prioritise the welfare of our law enforcement officers whose pivotal efforts we acknowledge in the entrenchment of a safe city,” Sanwo-Olu added.

Well, that’s where the news ended. Moving on, we will be analyzing the cost impact as well as the infrastructural requirement to sustain the new system.

Although the number of state-incorporated security officers cannot be ascertained, it is, however, projected (for the purpose of this write-up) to be at least 2000.

Following lengthy research on how much a BWC could cost, we settled for an average of $120 or N45,000 per unit where it is manufactured and shipped in bulk.

Considering that the deployment of the BWC in Lagos State will be a gradual one, we can as well peg the total unit per shipment at 1000, catering for about 50% of the projected 2000 state security workforce.

Where at least a 1000 unit of BWC is shipped-in, the state government would have spent a sum total of at least 45,000,000 on the security kits’ procurement.

However, the cost doesn’t end at the purchase of the BWC, at least, going by the American Police Executive Research Forum (PERF) report.

According to the report, the financial costs of BWCs can be significant, going beyond the immediate up-front costs of purchasing the cameras.

The report added that there are major back-end costs involved in operating and maintaining a BWC programme over a long-term duration.

Speaking of which, some basic expense that is often necessitated by the purchase of a BWC includes the procurement of an annual subscription to a cloud-based database, something that private vendors typically provide.

There is also a need to set up a standby team of engineers or experts whose duty is to monitor or review all activities that each BWCs captures.

In the event where the state government deems it essential, it would automatically require hiring additional staff, e.g. to review and tag footage; categorize incidents appropriately and; document their locations appropriately.

There is also the administrative cost associated with developing and managing BWC programmes, procuring contacts, equipment, and personnel; developing policies; and maintaining oversight.

At the tail end of the operation, the extensive cost of deploying a single BWCs according to police forum could go as high as $739 or N281,000 per annum.

With the skyrocketing Dollars to Naira exchange rate, the price could even go above N300 million as the case may be.

Interestingly, the use of BWCs by the State security workforce, when fully implemented, does not necessarily guarantee the actual transparency and accountability as many would have imagined.

If you are familiar with news from the foreign scene, you would have come across one or several cases where the use of BWCs by Police officers was rendered useless.

At least if you are not in the loop of any, you must have heard about the alarming rate at which U.S. patrol officers, most of whom are fully equipped with BWCs are involved in the harassment of citizens.

Recall the story around the death of George Floyd which was mainly as a result of the recklessness of the four policemen present at the scene.

Thankfully, the moment that led to George’s death was captured by a bystander; otherwise, the story could have been scripted in another way entirely.

Guess what, all four policemen responsible for George’s death had their BWC on, and only for some leaked footage, the thing could have slid down the drain even with the use of such a device in society as the U.S.

However, this is not to pilot a wrong narrative around the use of BWC in Lagos; instead, it is only a call for professional use and management of the device once fully implemented.

With the above said, below are other changes that Lagosians can anticipate even as we await the full rollout of BWC to State security personnel:

We can hope that the new development will reduce the height of extortion carried out by law enforcement officers all day long on the Lagos roads.

Giving the availability of the BWCs, law enforcement officers will have no choice but to do that which is requested by law.

For instance, in an event where a traffic violator is apprehended, a LASTMA officer will be forced to take the offender to the station to face the full wrath of the law.

Albeit, the officer would have lost an avenue to extort the offender unlawfully.

With BWCs rolled out to more officers including LASTMA, people will become more conscious of traffic rules than ever, especially considering that the avenue for bribery can now pose as even a more implicating option unlike before.

If you are caught on camera violating the law, the chances are high that you are brought to book than allowed to pay off your way out of the mess.

Honestly, you wouldn’t want to be at that tail end.

Although not peculiar to Lagosians alone, people tend to behave appropriately when they are in the face of a camera.

The same will be applicable moving forward when people approach an officer with a BWC.

Except for justifiable reason, there is no more excuse neither escape for violating the law.

Overall, the Lagos State Government’s plan to roll out BWC for state security personnel is a step towards fulfilling some of its obligation to fully become a smart city.

ANALYSIS: Visa’s Acceptance Of USD Coin And Its Benefits For Nigerian Users