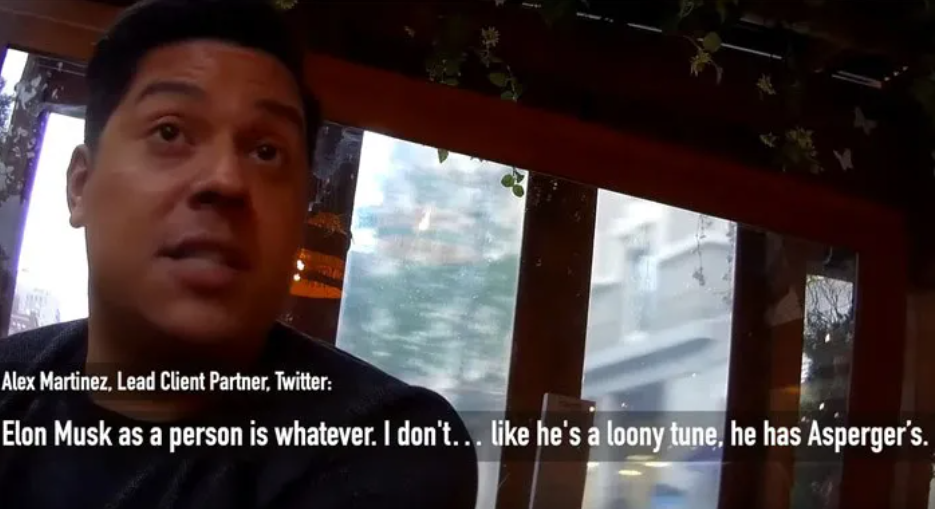 Alex Martinez, Lead Client Partner, at Twitter has exposed the company, saying Twitter’s Woke “Ideology” is responsible it’s inability to make “Profit.”
The Twitter employee revealed this to undercover Project Veritas journalist.
He said Twitter is not profitable because of the company’s woke ideology.
Alex Martinez explains how Twitter puts the “correct” views in front of people and ridicules Elon Musk.
He also affirmed that Twitter is not here to support free speech.
While many social media platforms like YouTube, TikTok, Instagram make money from other ways, Twitter makes money from Advertisers alone on the platform.
This has put the profitability of the company to question, especially as the world’s richest man, Elon Musk, wants to buy the company.

On the aspect of free speech, the revelations further exposes the micro-blogging app of not being democratic.

Hence, the argument that it wrongly banned former President Donald Trump for life hits up.
ALSO READ: What Is Entrepreneurship: Tips For Becoming Successful Entrepreneur
Recall that Twitter had imposed a life ban on Trump following the attack on the US Capitol on January 6, 2021.
But Elon Musk has, in a tweet, hinted that he would likely lift the ban on Trump.

Meanwhile, Martinez’s revelation is coming on the heels of a deal to buy @Twitter by Musk (@ElonMusk) in what has become controversial.

The billionaire CEO of Tesla, last Friday, said his $44 billion deal to buy the micro-blogging site is on hold pending details about fake accounts.

Musk revealed this via tweets he tweeted via his Twitter handle.

He also said that the deal is now on pause because the calculations about spam messages were not clear.

The world’s richest man had said during the onset of the Twitter buyoff deal that he would remove “spam bots” from Twitter.

Twitter had claimed that bot accounts only account for less than 5% of Twitter’s over 229 million daily active users.

There are so many Twitter bots and spam accounts and Twitter has had a history of battling them.

The fake, spam and bot accounts also make “inauthentic engagements” meant to make something seem more popular than it is.

They also engage in “coordinated activity” that tries to manipulate conversations.

And “coordinated harmful activity that encourages or promotes behavior which violates the Twitter Rules.”

So, when the deal was announced in late April, Musk said he wanted to make Twitter “better than ever” by “defeating the spam bots and authenticating all humans.”

Also, there are rumours the Tesla boss might want to back out of the Twitter deal entirely.

“If Musk does decide to still go down the deal path, a clear renegotiation is likely on the table which calls into question a number of topics (financing path, leverage of Tesla stock, prior financing partners, employee reaction).”

“Many will view this as Musk using this Twitter filing/spam accounts as a way to get out of this deal in a vastly changing market.”

However, if Elon Musk decides to back out of the deal, then he will pay $1b fee to the company.

This is clearly in the deal to buy Twitter.

Moreover, the current revelation by Alex Martinez affirms “Twitter not here “To Give People Free Speech.”

“So, its gonna say ideology which is what’s let us into not being profitable.”

“The rest of us who have been here believe in something that is good for the planet and not just to give people free speech.”