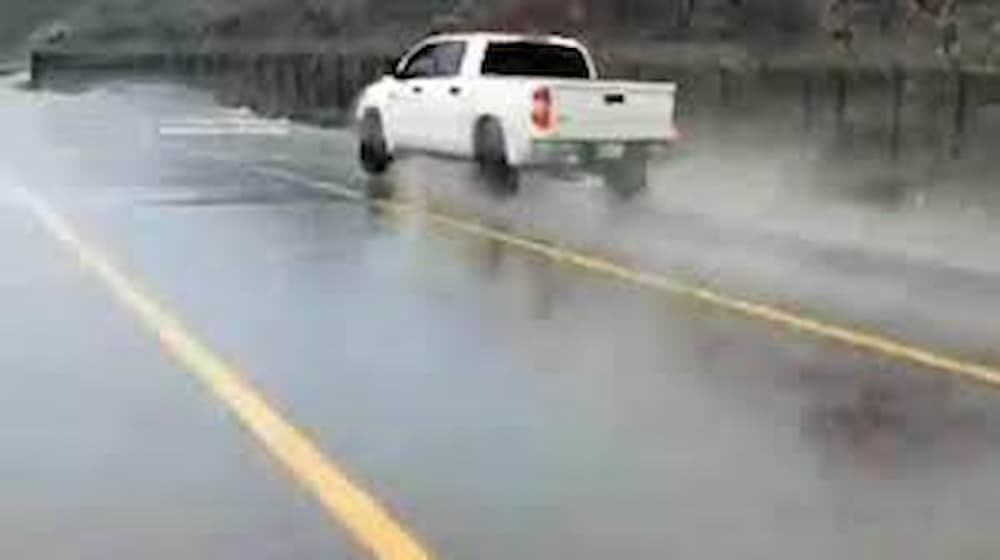 The artificial rains fell in many places, covering very large expanse of the city.

Authorities at the National Center of Meteorology used cloud seeding technology to generate the artificial rain to reduce heat.

To achieve this, Dubai administered the cloud seeding technology to the sky using battery-powered drones.

The center deployed specially built drones to send the electric charges into the clouds, resulting in rainfalls.

The UAE’s Center of Meteorology disclosed this in a statement.

The ability to create artificial rains that look like natural rainfall is really a major technological breakthrough.

This is because man now forces nature to spill out rains without nature’s consent.

Meanwhile, the natural rains fall following some processes that includes evaporation and condensation and precipitation.

Water evaporates when sunlight warms the surface of the waters such as oceans, rivers, streams, etc.

Heat from the sun makes water molecules move so quickly that they escape as gas into the atmosphere.

Once evaporated, a molecule of water vapor spends about ten days in the air.

Then, as the water vapor rises higher in the atmosphere, it begins to cool back down.

When evaporated moist air cools and collides with aerosols floating in the atmosphere, rainfall occurs.

This is because, when it is cool enough, it condenses and returns to liquid water.

Then, from here, they precipitate as rains.

However, science and technology have given man some levels of influence, allowing man to create artificial rains.

Dubai has been battling temperatures of over 50 degree Celsius for some time now without respite.

This temperature is part of effects of climate change.

The highest annual average rainfall total in UAE is less than 4 inches (10.2 centimeters).

At the same time, the country has one of the highest water consumption rates in the world per person, according to the U.S. International Trade Administration.

Government figures also show the country desalinates 42% of its water, though that’s an expensive and energy-intensive process.

Many countries have experienced varying degrees of either drought or floods that adversely affected residents.

While countries such as Germany, India and the US have witnessed heavy floods, UAE and Canada battled intense heat.

Some African countries are not left out as cases of severe flooding and drought have registered too.

Meanwhile, many countries, including China and India have adopted and invested heavily in technological solutions to their problems.

In 2017 alone, the UAE invested over $15 million in nine artificial rain-making projects.

With the artificial rains, Dubai has now been witnessing heavy downpours, including on its highways.

Then what is Cloud Seeding Technology?

Cloud seeding is a technological method of injecting chemicals or zapping (destroying) the clouds with electricity to create artificial rains.

“Here, chemicals like silver iodide, potassium iodide and dry ice are sent to the atmosphere through helicopters or planes.”

“These particles attract the water vapour in the air, leading to the formation of cumulonimbus clouds and finally rain.”

“It generally takes half-an-hour to produce rainfall by this method.”

“The time taken to generate rain depends on which portion of the cloud the chemicals are being injected into.”

“In cloud seeding, chemicals like silver iodide and hygroscopic salts are used as catalysts to reach that level.”

“After that, the cloud molecules coalesce to form bigger ones that lead to rainfall.”

“Recently, such experiments were carried out at Rayalaseema region in Andhra Pradesh and Karnataka,” he said.

Notably, India and China are some of the major countries creating artificial showers using cloud seeding.

South Korea and Thailand have used cloud seeding to make it rain and battle pollution.

China did that by first firing chemical rockets into the sky to ensure that it rained before the Olympics started.

However, a side effect of this process is the creation of acid rain which is harmful to humans.

Dubai, however, used similar but more environmentally friendly technique that does not involve the use of chemicals.

The UAE authorities also engaged the University of Reading, among others for the projects.

The projects charged the clouds with electricity, resulting in artificial rains that fell in Dubai last week.

The city administered the electric charges through battery-operated drones.

Explaining this, Reading University noted that, “The electric charge method operates by making the droplets stick to each other.”

Reading also said it administered the electric charges to the cloud using “small remote-controlled aircraft which are battery-powered.”

The university, however, assured that the process is “therefore, environmentally friendly.”

The creation of artificial rainfalls is surely an innovation worthy of praise and should be emulated by countries facing droughts.

Artificial rains can boost the economy of a city by providing rains for the planting of seasonal crops.

This can, in turn, boost the per capita income of the country as farmers can generate more funds from their produce.

The country’s DGP will also improve.

The processes of creating artificial rains come with many environmental hazards that may affect ordinary residents like you.

The process poses many side-effects which includes:  ecological imbalances and increase in levels of carbon dioxide in the atmosphere.

This can also result in ozone layer depletion.

How To Perform Several Tasks On Windows 11