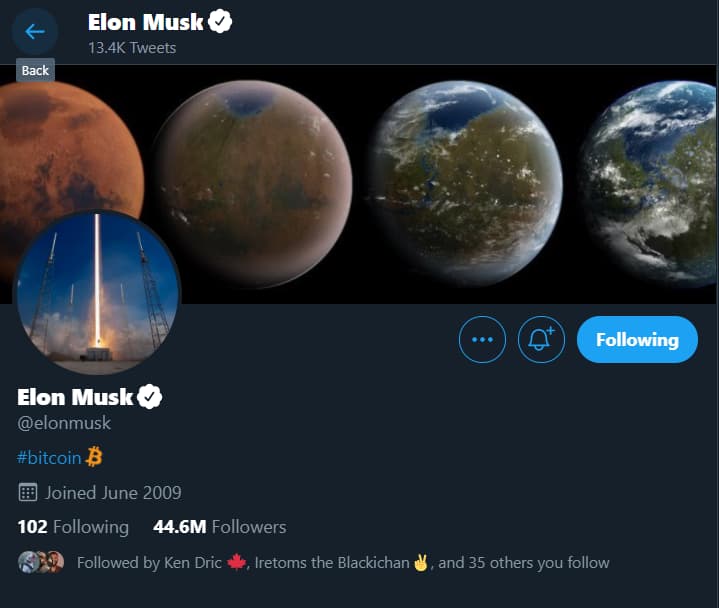 Elon Musk is affecting more things than expected with actions as simple as tweeting. It’s as though a troop of soldiers is lined-up behind him, waiting for his next move so they can follow suit.

Sadly, whilst some investors might be profiting from his word-of-mouth, others are suffering dearly and drowning in concern.

This happened immediately after the billionaire updated his Twitter bio to “#bitcoin” with the Bitcoin icon in front.

His update has incited several speculations on a possible acquisition of a higher chunk of the cryptocurrency by the billionaire.

His tweet was all the promotion that several users needed to see to trust Signal and jump ship.

Following his tweet at around 1:56 pm ET on January 7, Signal witnessed a rush of new entrants on its platform.

In no time, Signal became the most downloaded free app on the App Store and Play Store.

Also, in a mix-up, just like the Clubhouse and Clubhouse situation, some investors who were looking to pick up shares from Signal in response to Musk’s tweet ended up buying shares from a small components producer called Signal Advance.

Their investments sent the company’s stock up 1,100%.

On Thursday, Musk tweeted about Cyberpunk 2077. Owing to his tweet, CD Projekt – makers of Cyberpunk 2077 – witnessed a 12% spike in the share price.

It can play Cyberpunk

After launching Cyberpunk in December, they were forced to offer refunds to gamers who complained of unbearable glitches. As a result, the company’s share price slumped 27%.

On Thursday, Musk posted a picture of Tesla’s new Plaid Model S, which is due to ship next month.

He added that the electric vehicle could play the game (Cyberpunk 2077).

He also went further to praise the game’s aesthetics saying it was “incredible”. Consequently, up went their shares.

But, like many stock-related issues in recent times, it all started with the billionaire.

In case you’re wondering what Gamestonk means, it is a made-up word. The word combines GameStop and “stonks,” (not also a dictionary word) a slang used for stocks.

He pulled one more

Musk influenced one too many stock price shifts last week. Shortly after his “Gamestonk” move, he tweeted “I kinda love Etsy.”

Stating why he loved the brand, he said “Bought a hand-knit wool Marvin the Martian helm for my dog, “Following his tweet, Etsy shares went up 9%.

Whereas, before now, the company’s stock had remained stagnant in the premarket.

This is not the first time that Musk will be influencing the stock price shift. Last year, he did the same for his Electric Vehicle Company. At the time, he announced, via Twitter, that Tesla’s stock was “too high.” A week later, Tesla shares went close to 8% (7.78%) higher.

Etsy has played a major role since the inception of the pandemic last year.

During lockdown periods they served as a connecting link between several small businesses and their desired customers.

As a result, in the past 12 months, their shares have gone up remarkably by 300%.

Only this year, the company’s stock has risen by 15%.