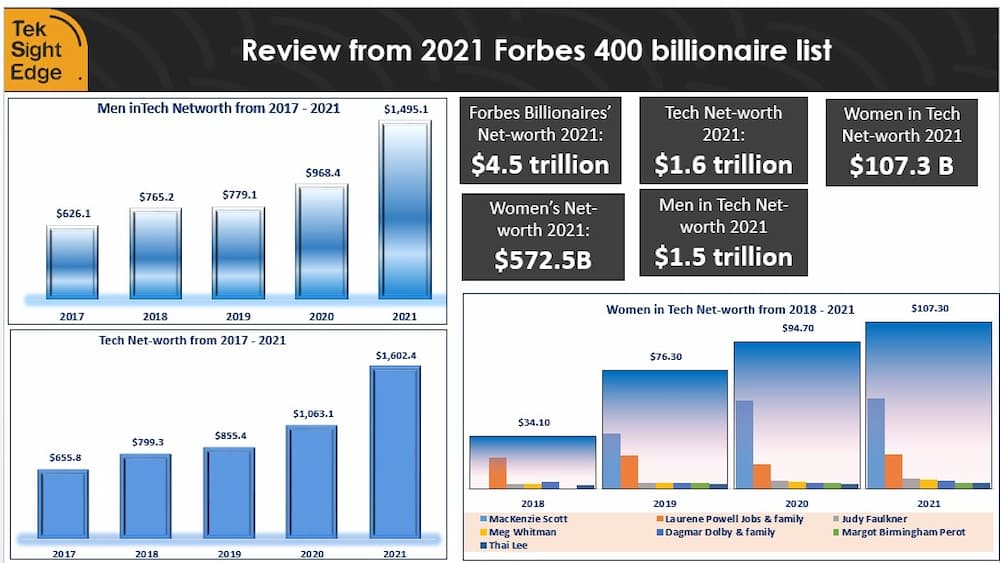 Seven women billionaires who made Forbes’ 2021 list of America’s richest billionaires are in technology sector and cumulatively worth $107.4b

This is out of the total of 56 women billionaires who made the list in the current year, 2021.

Yearly, Forbes releases a list of America’s richest, worth in billions, after calculating their net worth.

This year, the platform calculated the net worth of 400 billionaires whose individual net worth exceeds its $2.9b benchmark.

Forbes calculated the net worths for the list using stock prices from September 3, 2021.

The stock prices it used as yardstick turns out to be close to record highs for U.S. stock indices like the S&P 500.

Nevertheless, women, especially those in tech, made it, including new entrants.

This report, therefore, takes a cursory look at the worth of the women billionaires in tech.

It also reviews this against the total tech money among the 2021 male billionaires on the list, vis-à-vis the sum total for both genders.

This is to highlight the key financial spot that women hold, especially in the tech ecosystem.

It also highlights the level of the impact that the technology sector is making in the world’s economic sector.

But before that, let’s look at some things you should know first.

According to Forbes, the world’s richest Americans became even richer despite the Covid-19 pandemic that placed heavy strain on the world’s economy.

Forbes said although fifty-one billionaires dropped off the ranking this year, those who made or remained on the list became richer this year.

Among those who dropped are former US president, Donald Trump and Oprah Gail Winfrey, an American talk show host, television producer, actress and author.

Both Trump and Oprah were overtaken by other billionaires.

Another woman on the list as at 2020, who could not make the 2021 league, is Gap cofounder, Doris Fisher.

Her net worth fell short of a billion dollars, standing at $2.8 billion. 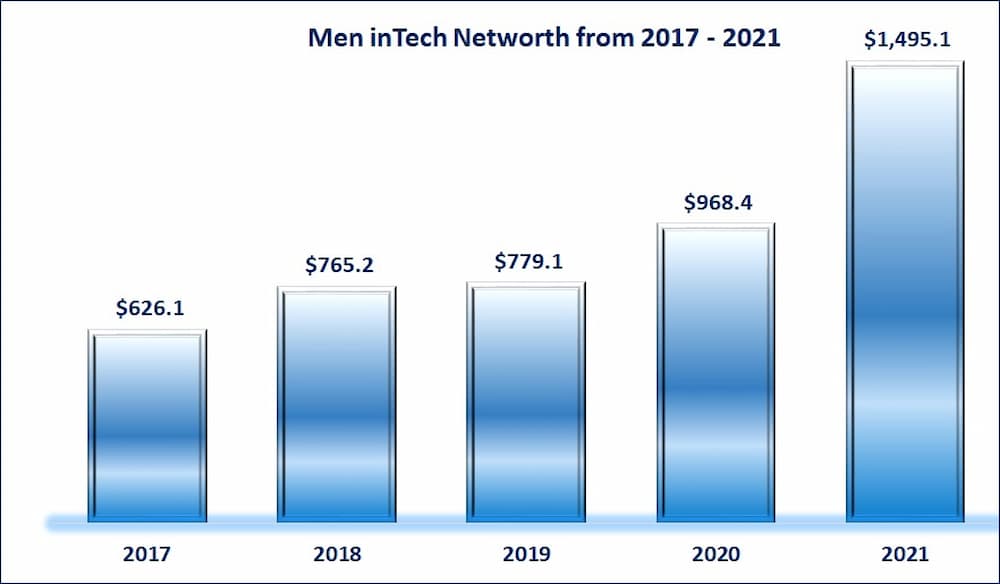 New entrants to the league:

Also, the platform revealed that despite the hardship caused by the Covid-19 pandemic, the rich people’s club recorded new entrants, some of who are women.

According to Forbes, “the 400 richest Americans are now 40% richer than they were last year—worth a collective $4.5 trillion—and those ranks have been bolstered by the addition of 44 new entrants.”

Men, as usual, have always dominated the billionaires list.

But the women, this time, have continued to stand their ground against the males’ dominance of the league.

One of the female billionaires among the resistance is Melinda French Gates, the ex-wife of billionaire Bill Gates.

She appeared on the Forbes 400 list for the first time this year, coming as the 158th with an estimated net worth of $6.3 billion.

Also, another woman who made the 2021 list is Miriam Adelson.

She is heir to her late husband, Sheldon Adelson’s stake in the Las Vegas Sands casino empire.

In total, there are 44 newcomers to the ranking, with a 29-year-old cryptocurrency entrepreneur, Sam Bankman-Fried, as the richest newcomer.

Bankman-Fried is worth $22.5 billion.

She has remained the richest woman for the seventh year in a row.

Alice beats other women billionaires with an estimated net worth of $67.9 billion.

She’s $5.6 billion richer than last year as a result of the 13% rise in Walmart stock.

This is against the richest American, Jeff Bezos who has clinched the title for the fourth year in a row.

The founder and chairman of online retailer and cloud computing company, Amazon is worth $201 billion.

With his recent dive into space tourism with his Blue Origin Company, Bezos raked in $22 billion more than last year’s list.

Meanwhile, although Forbes said two-thirds of the total billionaires made their fortunes in finance and technology, the richest woman billionaire, Alice Walton, made her fortune from Walmart, a retail corporation.

Walmart is a multinational retail corporation that operates a chain of hypermarkets, discount department stores, and grocery stores.

Nevertheless, seven of the 56 women billionaires who form our main focus in this report made the billionaires list from wealth they made from technology.

So, we shall look into them one after the other as well as cumulatively. 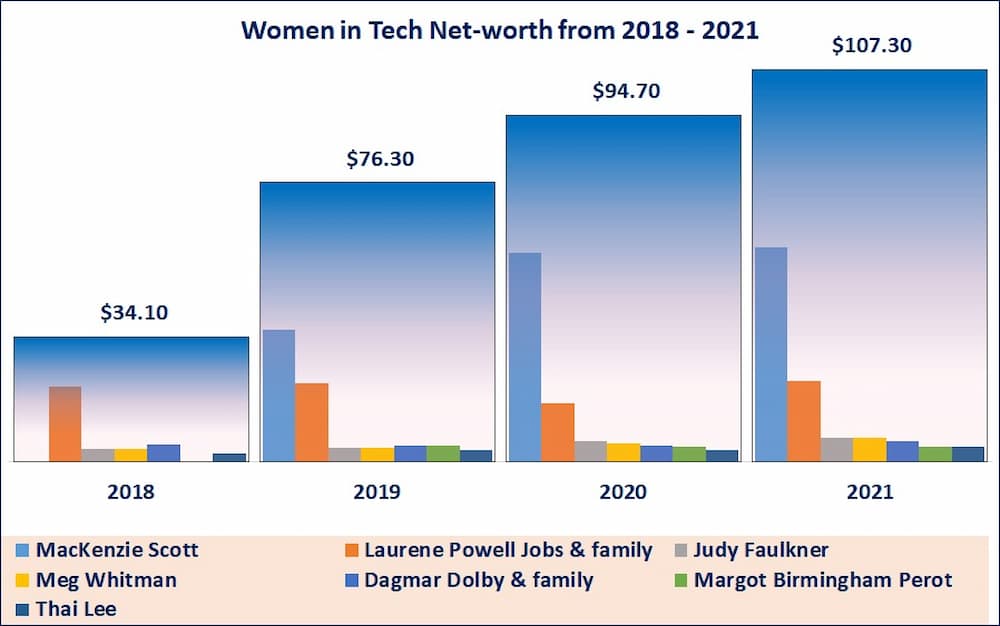 Total worth of the women billionaires in dollars:

On this year’s list, women make up just 14% of the Forbes 400 richest American billionaires.

However, the 56 women business moguls that made the list are cumulatively worth $564 billion.

Although the women improved by more than $100 billion from 2020 figures, their wealth is still a far cry from significantly halving the total value of the male billionaires.

Four new women joined the 2021 billionaires list. Three are entirely new while one made a re-entry.

The newcomers include: Melinda French Gates who now worths at least $6.3 billion.

Melinda joined the league after receiving billions worth of public stock as part of her divorce settlement from Microsoft cofounder, Bill Gates.

Another entrant is Miriam Adelson.

Gail Miller returned to join the list with a net worth of $3.2 billion.

Cumulatively, they are worth 45.4 billion.

At least, their worth beat the sum total of the four dropouts, Oprah, Doris, Fisher and Amy, whose cumulative $11b could not get them on the list.

The four dropouts are:

Real estate heirs and siblings, Amy Goldman Fowler and Diane Kemper of New York, are worth $2.8 billion and $2.8 billion, respectively.

Also, Oprah Winfrey is worth $2.6 billion while Doris Fisher, cofounder of retailer Gap, is worth $2.8 billion.

They are cumulatively worth $11billion. 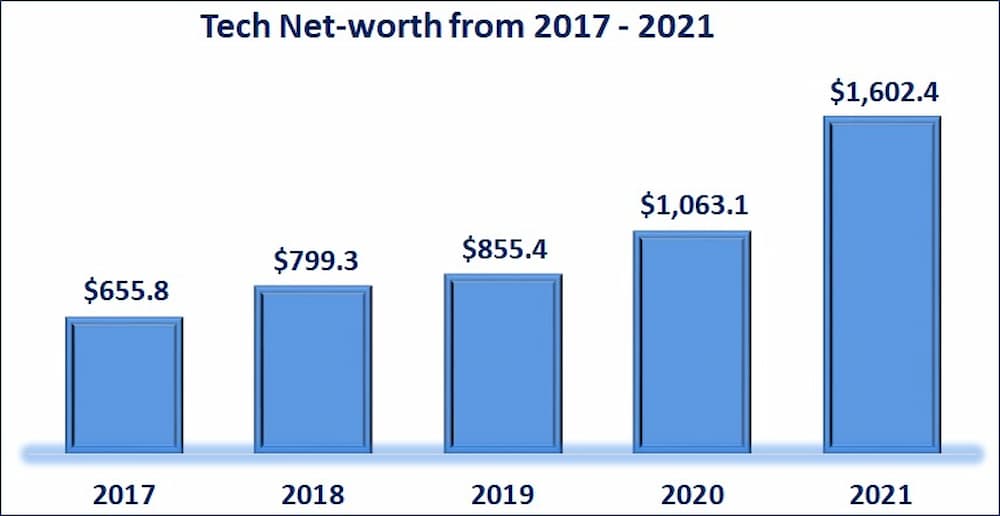 Net worth of value of billionaires in Technoloby

According to Forbes, the cumulative net worth of both the men and women billionaires on the 2021 list who made their fortune from technology is $1.6 trillion, which amounts to 36% of the total $4.5tr that the billionaires are worth.

Specifically, women in tech took 7% out of the $1.6tr net worth of the value of billionaires in technology.

Similarly, men in tech took 93% out of the $1.6tr net worth of the value of billionaires in technology.

Below are the women billionaires in tech who raised the above figure and their worth from 2018 to 2021:

the 7 women billionaires in tech by Forbes 2021

The Big 7 women billionaires in tech and their four years worths:

These seven women billionaires in technology have a cumulative worth of $107.30b in 2021 alone.

From 2018 to 2021, Techuncode observes that the women billionaires in tech improved significantly in their net worths.

This shows that technology is one of the world’s fastest and vibrant means of affluence.

Meanwhile, it also shows highlights the importance and impact of technology in the society because, the world greatly relies on technology for survival.

However, drawing from the fact that only 7 of the women billionaires are in tech, it means more women should delve into the tech industry.

With many women in the tech industry, the male dominance of the richest American’s club would either be halved if not overtaken in the nearest future.