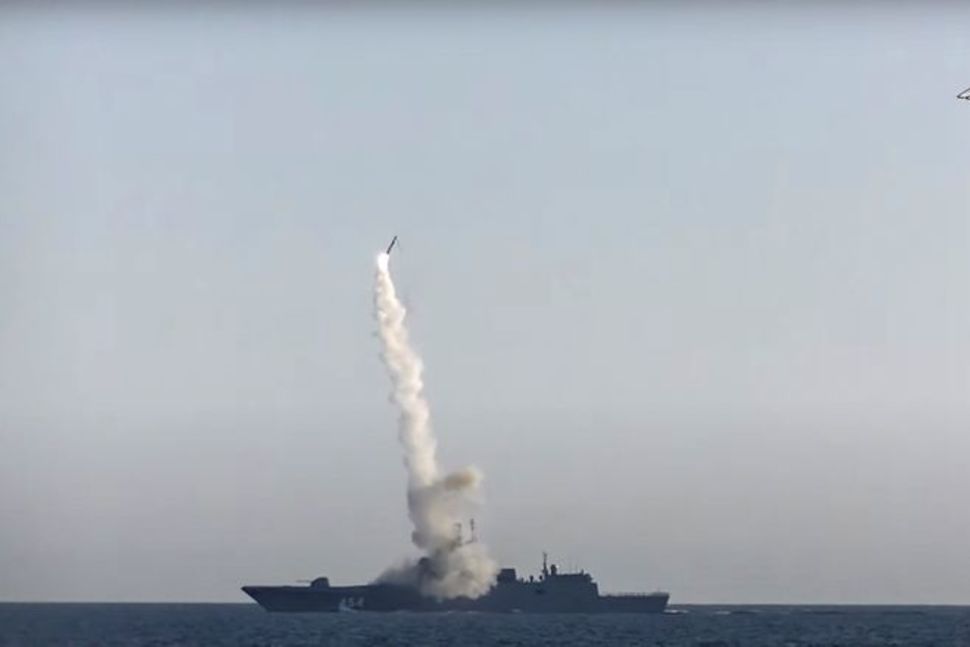 Russia has test run a Tsirkon (Zircon) hypersonic cruise missile that speeds seven times faster than the speed of sound.

The country successfully test fired the missile over the weekend.

The Russian Defence Ministry said in a statement, Monday, that it fired the missile from a warship located in the White Sea.

“#Footage#RussianNavy continues tests of the #Tsirkon hypersonic cruise missiles. In the White Sea, the #AdmiralGrigorovich frigate successfully strikes a land target with a #Tsirkon missile on the coast of the #SeaOfBarentshttps://t.co/olmWB2oCUo#MissileLaunch#RussianWeaponspic.twitter.com/dgn8kfj4SH — Минобороны России (@mod_russia) July 19, 2021”

It said Zircon was fired from the warship, Admiral Gorshkov, and traveled seven times faster than the speed of sound.

The statement added that the missile hit a ground target on the coastline of the Barents Sea more than 350 km (217 miles) away.

“The Zircon missile successfully hit a target directly at a range of over 350 kilometers (217 miles). The flight speed reached nearly Mach 7.”

“The tactical and technical characteristics of the Tsirkon missile were confirmed during the tests.”

The ministry showed footage of the warship launching Zircon at a target on the Barents Sea coast in northern Russia.

It said it would mount the Tsirkon missile system on Russia’s submarines and surface ships.

Russian President, Vladimir Putin, has touted that the missile has no equal in the world.

Though he had previously boasted that the missile would have a speed nine times faster than that of sound.

He described the Zircon missile as an ‘invincible’ weapon of mass destruction and a new generation of lethal technology.

Putin boasted that the missile can evade the US defense shield, including being undetected.

Although Russia has been test-firing the missile for long, Putin said it was a “great event not just in the life of our armed forces but for all of Russia.”

Other sophisticated lethal technology developed by Russia are the Sarmat intercontinental missiles and Burevestnik cruise missiles.

Russia test-fired some hypersonic missiles in October, on Putin’s birthday.

These missiles, as claimed by the Russian Defence Ministry, can circumvent existing defense systems in any part of the world.

Some experts noted saying “ the combination of speed, manoeuvrability and altitude of Zircon and similar hypersonic missiles makes them difficult to track and intercept.”

In 2019, the Burevestnik nuclear-powered cruise missile caused a deadly blast at a test site in northern Russia.

The blast caused a sharp spike in local radiation levels.

Also in 2018, Putin had said during an announcement of the launch of many hypersonic weapons that Russia could hit anywhere in the world.

He had also threatened to deploy such missiles to lurk outside U.S. territorial waters.

Putin had made the threat saying he would put action to his words if US deploys intermediate-range nuclear weapons in Europe.

The missile tests are a show of force by Russia, trying to show the US its advancements in lethal technology.

The US and Russia have been in dispute over several issues that includes Belarus, Ukraine, NATO and human rights.

Relationship between the two countries has been that of cat and mouse, with neither taking the other as ally.

The relationship slid to an all-time low during the administration of former US president, Donald Trump and has festered ever since.

Meanwhile, the US prides herself to be the world’s most powerful country.

But other countries like Russia and China have come to disagree.

Moscow has, in recent years, hyped herself to have developed futuristic weapons that give her an edge over US.

Recently also, the US accused Russia of meddling in the country’s recent presidential election.

The US equally accused Russia of cyber-attacks, allegations Russia has vehemently denied.

However, despite the disagreements between the two countries, they both seem to have one thing in common.

A common grounds of interest for the both countries seem to be on climate change alone.

Both US and Russia are the world’s second and sixth biggest polluters.

With the negative effect of climate change telling on the world, both countries are in the talks on way out.