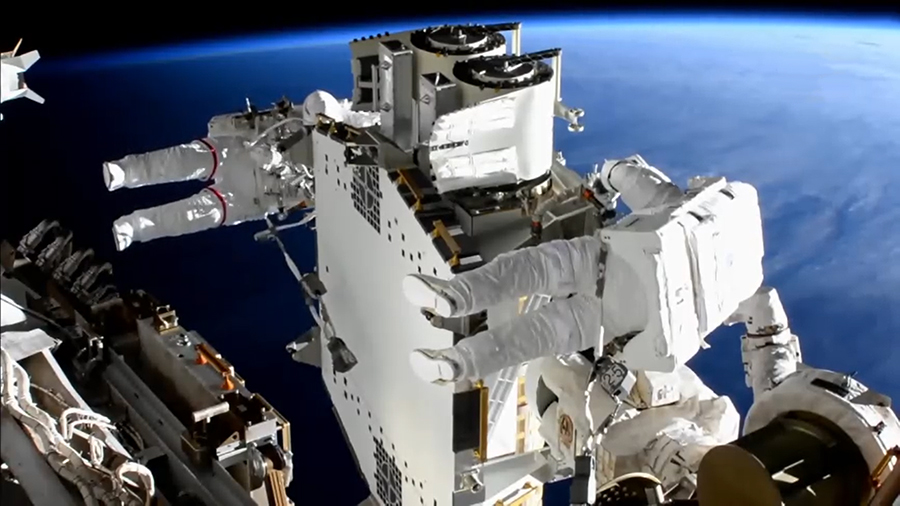 Two astronauts have, Sunday, successfully installed new solar panels on the International Space station, ISS. The astronauts, Shane Kimbrough who is with NASA and Thomas Pesquet of the ESA (European Space Agency) have been in space for over two months now, having arrived in April 2021. They installed the new solar panels after spacewalking for six hours and 28 minutes.

Thomas Pesquet tweeted on Sunday, after the installation saying, “It is a huge team effort each time and couldn’t be happier to return with @astro_kimbrough.” Kimbrough too had tweeted and wishing all fathers well on Sunday saying, “Happy Father’s Day. Thanks for working with us on a Sunday.”

According to the National Aeronautics and Space Administration (NASA)), the two spacewalkers deployed six pieces of a 60-foot-long solar panels, referred to as ISS Roll-Out Solar Arrays (iROSA) and installed them on the ISS to serve as enhancements to the station’s source of power.

ALSO READ: What You Should Know About SpaceX’s Potential Launch Of Starlink Satellite Internet In Nigeria

A statement by NASA said the solar panels were deployed on the far end of the left (port) side of the station’s backbone truss structure (P6) “to ensure a sufficient power supply is maintained for NASA’s exploration technology demonstrations for Artemis and beyond, as well as utilization and commercialization.”

In addition to the above, the solar panels will augment power to the station for carrying out unique research and technological demonstrations that help prepare for long-duration missions to other planets like the Moon, Mars and also improve life on Earth.

The Astronauts, a French and an American, began the spacewalk at 8 a.m ET and completed the installation at 2:10 p.m. EDT, bringing also the amount of time spent working outside the station to 63 days and 56 minutes, revealed NASA. 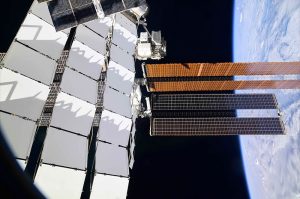 According to the statement by NASA, “Kimbrough and Pesquet successfully unfolded the solar array, bolted it into place, and connected cables to the station’s power supply to complete deployment. Additionally, the astronauts removed and stowed hardware in preparation for releasing the second iROSA from the flight support structure for installation.”

It also revealed that the duo are, tentatively, expected to carry out another spacewalk on Friday, June 25, 2021 when they will “work toward the second solar array upgrade – this one on the P6 truss’ 4B power channel.”

Meanwhile, the installation of the panels did not happen without initial difficulties. Although astronauts Pesquet and Kimbrough successfully installed the solar rays, their mission was not without serious technical challenges that forced them to retreat during their previous outing on Wednesday.

Astronaut Kimbrough was forced to return to the airlock to reset the data of his spacesuit. Also, his cooling system showed a momentary pressure spike which he had to fix before they later got the job done.

The International Space Station (ISS) is a space laboratory station built and managed by many countries including US, Russia and Canada. It was built and completed between 1998 and 2011. The space laboratory, which floats above the earth like a ship, flies at a speed of 17,500 mph (28,000 km/h), taking just 90 minutes to circle the globe.

Its distance above the earth is at an average altitude of 248 miles (400 kilometers). The ISS has many living quarters, laboratories, two bathrooms, gym facilities and a 360-degree bay window. It also has exterior tethers that provide support for it.

Furthermore, all the parts were taken to the space piecemeal and built there while in orbit by both astronauts and robots.

While at night, the ISS looks like a bright moving light in the sky that can be seen even without the use of some special lenses, though only by those who know how to look for it.

However, NASA has special App for seeing it. Moreover, the space lab can accommodate between three and six person for many months at a time and as many as 13 persons for a few days in one time.

The solar panels are 63 feet (19 meters) long and 20 feet (6 meters) wide. Each of the panels is capable of producing 20 killowatts of power. The panels will increase up to 20-30% electricity supply to the orbiting laboratory.

The 19-metre panels were delivered to the station early this month by SpaceX’s CRS-22 Dragon cargo spacecraft. The solar panels are expected to last for 15 year.

Other uses of the Space Lab:

The solar panels were built and aimed to be used for similar projects.

Confirming this, NASA’s Gateway Program manager, Dan Hartman, had noted during a pre-spacewalk briefing, that “the solar arrays are built by the same company, DSS, that we plan to use for the Gateway. We’re going to be watching the ISS EVA crew members and team go integrate these arrays over the existing arrays and certainly apply lessons learned that we have there.”

Number of astronauts and Spacewalks done so far:

So far, a total of 240 spacewalks have been carried out by several astronauts to support the gathering and maintenance of the orbiting laboratory.

Sunday’s outing was the fourth time Shane Kimbrough and Thomas Pesquet have walked in the space together.

They had walked twice in 2017 during a mission to space where they replaced nickel-hydrogen batteries with lithium-ion ones.

Also, 244 people from 19 countries have visited ISS and the laboratory, which orbits round the globe, has hosted nearly 3,000 research investigations from researchers in 108 countries and areas.

Hours of Spacewalk by the two astronauts:

Kimbrough has now spent a total of 52 hours and 43 minutes spacewalking, and Pesquet’s total spacewalking time is 26 hours and 15 minutes.