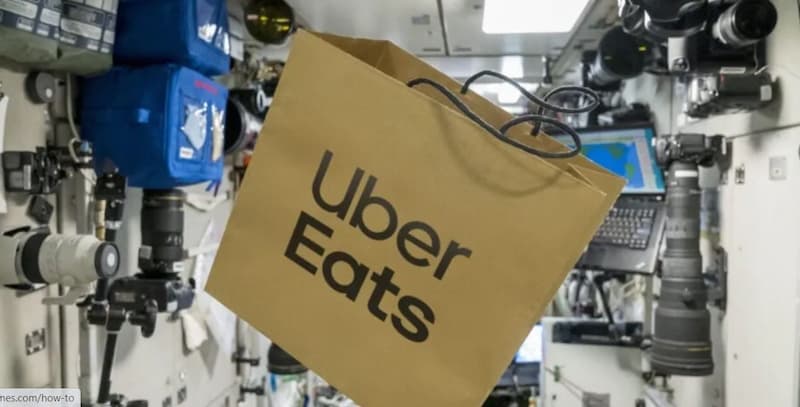 Uber Eats has made its first food delivery to space.

The ride-hailing and delivery company successfully delivered food to an astronaut in the space.

Uber Eats said with the success, it has commenced its food delivery service to space.

The food delivery app announced last week it has commenced the special service.

They got dishes such as boiled mackerel in miso and simmered chicken with bamboo shoots.

Well, the food delivery app does not actually have a driver or delivery system to space currently.

However, what it does is to send orders via astronauts on mission to space.

The company carried out its first food delivery through a Japanese billionaire, Yusaku Maezawa.

Maezawa went to outer space for a 12-day mission in a Soyuz spacecraft.

Recall that the Japanese billionaire made news for buying all the seats on SpaceX’s first tourist flight to the moon.

That tourist flight to the moon will hold in 2023.

He also delivered a brown paper Uber Eats bag to the astronauts.

Uber Eats shared 25-second-clip of Maezawa delivering the food to the ISS crew via its Twitter handle.

“Uber Eats delivery continues to evolve. One after another to places that are not delivering now.”

The food delivery app said the food was delivered at 9.40 AM EST on 11 December.

It said the astronaut delivered the food after the aircraft traveled a distance of 248 miles.

He was wearing the food apps cap.

The Billionaire started the space travel from Baikonur Cosmodrome in Kazakhastan on Wednesday.

Meanwhile, Uber Eats had offered $10 discount on all order of or above $20+.

The company said the discount was for the first 24,800 people with promo code SPACEFOOD.

Uber Eats is showing innovation and breaking the atmospheric barriers to extend its services in space.

What it means is that as space tourism is on the increase, companies have the demands to satisfy space tourists in various ways.

Also, this step positions the company as one that can deliver orders anywhere.