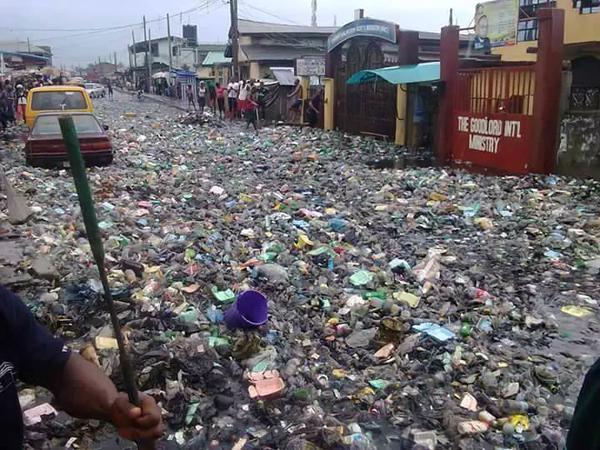 The Commissioner for Agric, Lagos state, Ms. Bisola Olusanya has made appalling revelations on why Lagos is dirty.

…Lagos produces only about 15% food

…50% food in Lagos turns to wastes before getting to cinsumers

Many reasons could have rightly contributed to why the state is dirty.

However, a dominant contributor to the dirtiness of the state is the lack of organized market system.

The Agric commissioner revealed this to stakeholders and investors at the recent Lagos state Social Development Goals roundtable.

Also, the office of the Lagos state Social Development goals, SDGs, organized it.

ALSO READ: Over 50,000 Vehicles Get Stuck In Lagos Traffic Daily

Moreover, the SDG Roundtable had the theme, “Attracting Investment for economic recovery.”

The roundtable presents Lagos as an investment destination.

Present at the forum are the Governor of Lagos state, Babajide Sanwo-Olu, fourth estate of the realm, and captains of industries etc.

Also, Consular-General of the Kingdom of the Netherlands, Michael Deening was present.

Likewise the Consul General of South Africa, Ephraim Darkey was equally at the forum.

Meanwhile, according to the commissioner, the market system in Lagos is so disorganized that even agricultural waste which forms major bulk of the waste heaps in Lagos keep suffering as a result of poor storage and processing systems.

According to a report on www.cracktechnology.com, consequently, it is no common news that the state has taken the undignified honour of being one of world’s dirtiest cities.

Moreover, the Association of Waste Managers of Nigeria, AWAM, also known as Public Private Participation, said in 2018 that Lagos State is one of the dirtiest cities in the world.

Vice-Chairman of AWAM, Mr David Oriyomi, had made the assertion while speaking with newsmen.

But despite the several interventions in the area of trying to keep the city clean, dirtiness remains.

So, the question is; why is Lagos dirty?

Well, the commissioner for agriculture gives us the true reasons why Lagos is dirty.

Why Lagos is dirty:

Lagos is where you can find all the big boys and girls in Nigeria.

The city is a compendium of the supper rich, the mega wealthy and the never-ending people of affluence.

Lagos is the state with the cream de la cream of the society.

The Eko city, as it is popularly called, is full of entertainment and other life activities that there is literally no night or Day. Any time is fun time.

So, there is never a dull moment in Lagos.

Also, almost all major businesses have their headquarters in Lagos.

Meanwhile, Lagos is a state where you come as nobody and with nothing to become somebody with something.

Hence, every non-Lagosian dreams of coming to Lagos.

In 2017, the then Lagos state commissioner for environment, Babatunde Adejare, said that over 6000 people come to Lagos daily.

He had stated this at an event which the Nigerian Environmental Society (NES) organised to mark 2017 World Environment Day.

Consequently, population experts have said that Lagos has over 20 million population.

Although this figure varies with that put by World Population Review, a US independent data organization.

Meanwhile, the population of Lagos has a growth projection of over 30 million in the next 10 years.

Meanwhile, many environmental experts have, on various occasions, given reasons why Lagos is dirty.

For instance, Mr Oriyomi had said the mega city had become dirty due to deliberate attempts to relieve the waste managers of their job.

Others have also attributed overpopulation, lack of proper industrial planning as the reasons for this.

Likewise, others have blamed it on indiscipline of the people and poor drainage systems.

These are all valid reasons.

Meanwhile, despite the growth of the mega city to become the economic central hub of Africa, dirtiness remains a challenge.

She said while the state only produces just about 15% food, over 85% of its food needs is imported.

According to her, the state consumes about over 400, 000 tonnes of fish annually.

She said Lagos is the largest market for beef in Sub-Saharan Africa.

According to her, cattle are imported into Lagos from Bukina Faso, Cameroon, Niger Reublic and other places.

Ms Olusanya also revealed that 50% out of the 85% of the total food that come into the state ends up as waste.

She said this translates to the massive waste deposits littering Lagos.

The commissioner also attributed the reason for this to poor or disorganized market system.

According to her, the implication of this is that Lagosians will pay more for waste deposals.

Also, she said such waste could have been strategically and systematically prevented with organized market system.

The commissioner said the administration of the Babajide Sanwo-Olu recognizes the challenge.

She said the state government has launched measures to make Lagos clean.

According to her, the measures would bring about cleaner, healthier and cheaper food for Lagosians.

She recommended a proper and organized market system as solution to the Lagos traffic congestion and food wastage.

She said this will in turn improve the economy of the state.

They will spend just little and save more on food consumption in Lagos.

She said to tackle the food challenge, the Lagos state government has launched three tiered market system that involves the following:

The hub involves nine wholesale central food hubs at the periphery of Lagos like Badagry, Lekki Epe, etc to receive the food trucks coming into the state from other parts of Nigeria.

The truks bringing in the food can have their contents dislodged into the large warehouses that would be built at the peripheries to better preserve and process them before their entry into the state.

Smaller truck sizes on inter-city operations can go pick food from the central hubs and distribute to the inner city markets of Lagos.

This will further remove heady trucks and congestions on the roads of Lagos.

It will also improve economic growth.

She said these are to have an organize market structure to monitor and measure food demands as against supply.

She closed by saying that food is the one thing that holds all the 17 SDG goals together.

This is because , without food, there won’t be poverty eradication, Zero hunger, gender equality, etc.

The Agric commissioner also urged investors to invest in Agriculture in Lagos, including waste management.

She said Lagos is the central hub of every sector thanks to the plans and strides of successive governments who continue to build on existing infrastructure to make Lagos what it is today.

Ms Olusanya also said that the improvements which Lagos now has, is a result of the faith that the business community has continued to have in Lagos by investing in the state.

She urged private business and all investors to continue to do more to build Lagos to a better state.

The deal book also details the available incentives that the state and Nigeria puts in place.

The deal book also details how investors can better partner with Lagos.

She assured investors of the continued business friendly measures that Lagos will continue to put in place to boost investor confidence and guarantee trust.

Waste has continued to place a dent on the gains which Lagos records across all sectors.

However, this can also mean big opportunities for investors to leverage on and create wealth.

Also, the reasons why Lagos is dirty involve disorganized market system but thanks to the state government’s intervention plans.

Although Lagos may be dirty, it does not stop the city from becoming the economic hub of the Sub-Saharan Africa.