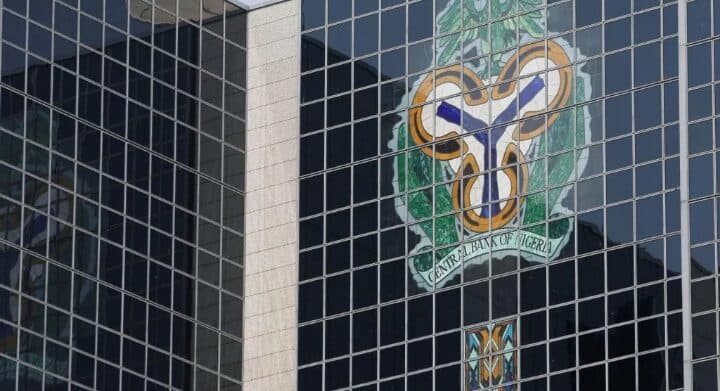 It’s almost a week since the Central Bank of Nigeria (CBN) rolled out a directive that asked local banks to give out N5 for every dollar they receive as remittance from abroad.

By the time the news hit the internet, it felt like the best thing to have happened to Nigerians in recent times.

Although, met with mixed reactions from many who felt it could be another ‘forex trap,’ the directive dubbed the “Naira4Dollar” scheme seems like a brilliant idea.

According to the apex bank’s official statement, the new scheme is an effort of the bank to incentivize Nigerians as well as to encourage the inflow of diaspora remittance. 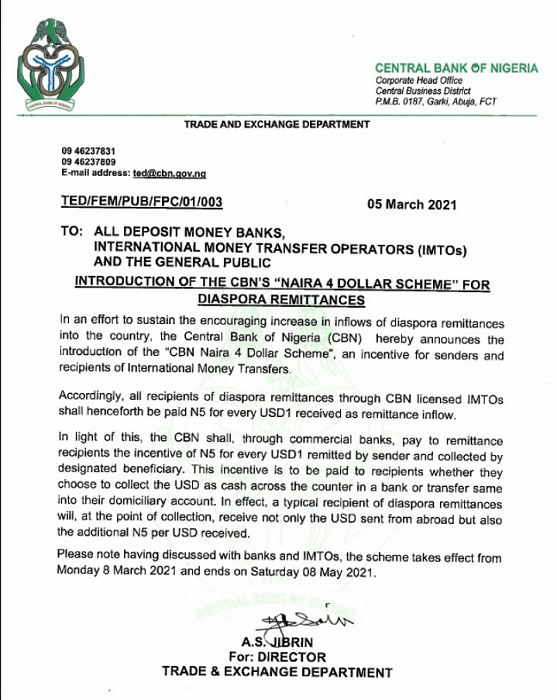 While the ‘giveaway’ is not expected to last forever, CBN said that the scheme will only run through Saturday, May 8, 2021.

Regardless, that’s enough time to cash out from the Central Bank if are so willing to claim a pile of the National cake.

Here is the main thing!

A lot has been happening since the announcement of this ‘giveaway’ scheme.

You do also agree that Nigerians would have been sorting ways to take advantage of this ‘major’ opportunity.

But just before we look at possible ways by which Nigerians can maximize this opportunity, below are the major impacts of the CBN’s “Naira4Dollar” scheme on Nigeria’s economy so far.

Arguably, remittance is one of the major sources of cash inflow for any country including Nigeria which seems to just come to such realization.

In the Sub-Saharan region, there has been a steady increase in terms of remittance of which the majority is attributed to the increasing rate of inter-regional migration.

According to a World Bank report, migrants from the Sub-Saharan African region increased by 2 million within four years, from 19 million in 2015 to 21 million in 2019.

In 2019 alone, remittance to Sub-Saharan Africa increased by 4% to about $48 billion, although a drop in that figure was also projected by the World Bank for the subsequent year as a result of the pandemic.

Specifically, the figure of migrants from Nigeria in the diaspora was pegged at a total of 1.24 million in 2017.

This figure, according to PWC, a prominent London-based banking firm, is expected to shoot up in subsequent years.

Although we can’t put a specific number to those that have migrated out of the country in recent times, PWC puts the number of remittances into Nigeria in 2017 and 2019 at $22 billion and $23.6 billion respectively.

In the same vein, CBN governor, Godwin Emefiele recently revealed that remittances flow into Nigeria has improved from a weekly average of about $5 million to over $30 million per week following its recent policy.

While it is not necessarily about the migrants alone, there are a couple of other factors including foreign investment that also contributes significantly to the increasing rate of remittance in Nigeria.

Giving that Nigeria already boasts of an enabling environment for remittance, CBN’s latest move will further trigger more diaspora funding in the country.

According to a report by Researchgate, the inflow of remittances leads to an appreciation of the nominal exchange rate and an increase of money supply under the fixed exchange rate regime.

The report further suggested that a greater degree of openness could also help mitigate the appreciation.

Hence, “remittances and the degree of openness play a significant role in complementing monetary and exchange rate policy, helping to boost economic development,” the report added.

Part of the aim of the CBN is to also regulate the high rate at which Naira continues to depreciate parallel to other foreign currencies.

So far, the Naira exchange rate has been stable since the announcement of the Naira4Dollar scheme and appreciated in some cases such as Naira to Euro.

If this persists for a longer time, then we could see the Naira further appreciate against the likes of Dollars, Pounds, and Euro for as high as 10% or more.

Prior to the introduction of the new scheme, International Money Transfer Operators (“IMTOs”) like Western Union and World Remit was able to reduce the cost of transactions from the diaspora.

However, this seemingly benefit appears to be taken away after the CBN introduced its recent ban on foreign remittance.

Further to this development, persons remitting to Nigeria will have to pay more than they normally do to send money into the country; hence, the ‘giveaway’ scheme appears to be a way to cut down on the charges.

For instance, Western Union charges between $0.99 to $45 for transfer to a bank account.

As such, an upward of $90 must be sent in remittance for CBN Naira 4 Dollar scheme to have any significant effect on the high transfer rate.

Interestingly, this is applicable across the board with other IMTOs like Transferwise and World Remit charging between $3.09 to $37.44 and around $0.8 respectively for a transfer to a local bank account.

Stiffened outflow of cash to the diaspora

The best way to optimize the newly-introduced Naira4Dollar scheme is to shut more doors for cash outflow.

Before the recent development, the CBN restricted Deposit Money Banks from operating as Money Transfer Operators (MSTO); however, it allowed them to operate as agents.

The fact is that the majority of CBN’s previous policy made it quite difficult to transfer funds out of the country through legitimate means which takes us to the next part of the discussion.

Cryptocurrency to the rescue

Although CBN has shut some major doors to cryptocurrency transactions in Nigeria, the business has adopted other alternative models to thrive.

In a recent directive, the CBN instructed Deposit Money Banks (DMB) and other financial institutions to close accounts used in trading cryptocurrency. 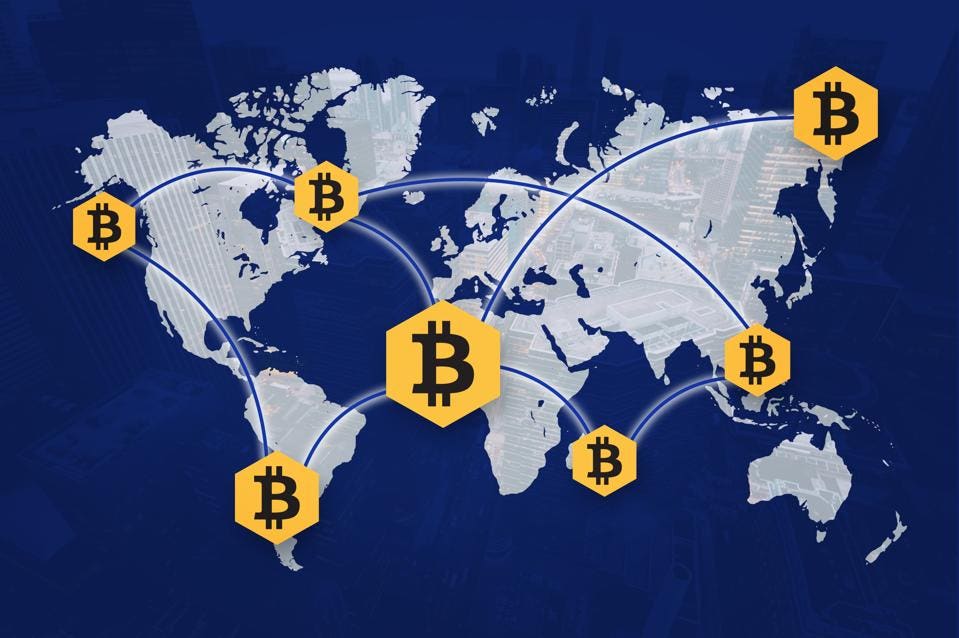 There has been an increase in the adoption of this method of cryptocurrency transaction, further defying the plan of the CBN to regulate the booming industry.

How does this relate to the Naira4Dollar scheme? Well, this could mean good business for some smart Nigerians.

Here is a scenario to explain how Nigerians can cash out big time from the ongoing giveaway;

“As a Nigerian, I have a relative in South Korea (his name will be X in this context), and guess what we are both very knowledgeable about how the remittance thing works.”

“I often receive remittance from X via MoneyGram. The last remittance was $10k, although that was before the giveaway scheme.”

“Now I’m about to receive another $10K and I will be receiving an additional N50,000 from the CBN as give away.”

“Once that’s done, I go straight to the Bureau de change for a higher conversion rate; save the money back in my naira account and subsequently trade it for bitcoin on a P2P cryptocurrency platform.”

“Taking advantage of bitcoin volatility, I would send a BTC value of the initial $10K sent to me back to South Korea; X trades it on any reliable P2P cryptocurrency platform, and subsequently sends the money via Moneygram, while the circle continues.”

Unarguably, some Nigerians must have devised means of making a lot of profit from the ongoing scheme and the above scenario is just one of many means possible.

While the above scenario is not a format or guarantee for profit-making, kindly share with us in the comment section below, your thoughts on the CBN Naira4Dollar scheme.

Related Topics:CBNFeaturedNaira4Dollar Scheme
Up Next