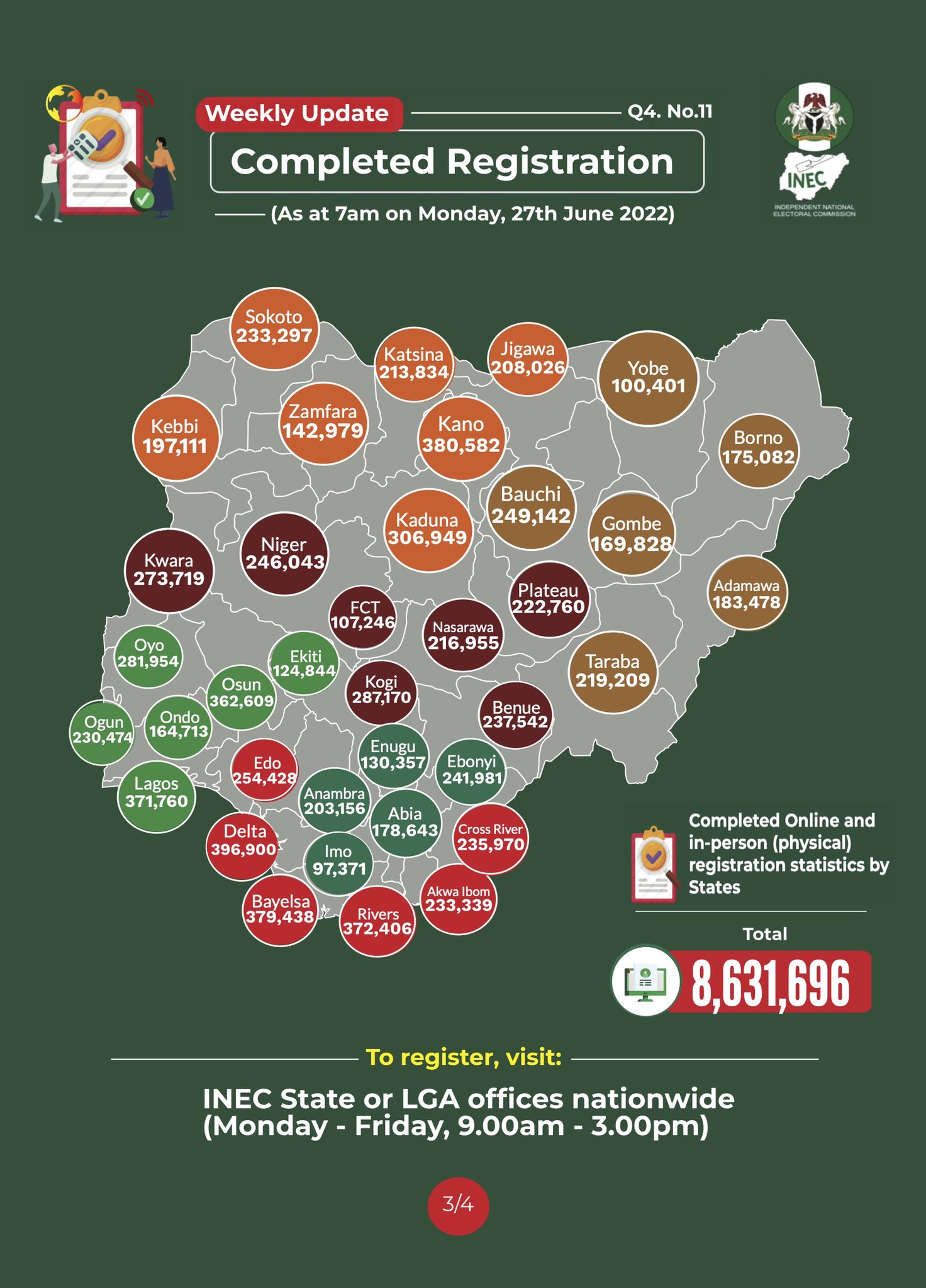 CVR exercise for fresh registrants, in preparation for the coming 2023 general election in Nigeria, continues to gain momentum as the north tops by 111, 010 registrants while the whole of south struggles behind.

As the 2023 general elections draw nearer, continuous voter registration (CVR) is ongoing for Nigerians who have not registered for their voter cards.

Keep in mind that a legitimate voter card is the only way by which a Nigerian can vote for his choice candidate during political elections in Nigeria.

Therefore, the higher the number of Nigerians who registered for their voter cards, completed the process and cast their votes appropriately on election day determines who emerges winner of the polls.

Also, the coming election has recorded remarkable changes in the usual way that registration for voter cards had taken place in the country.

For instance, so far, Nigeria has conducted six general elections since the return to civil rule.

However, the elections before the 2019 election were characterised by exclusion and marginalization of young people, especially from the CVR stage to the final voting stage.

Most notable was in the number of young people vying for political offices.

Nevertheless, with the current poor economic situation in the country which has thrown many Nigerians in poverty range,  the majority of Nigerians now seem to be serious about electing leaders with better leadership qualities.

Consequently, the political terrain in the country keeps seeing various conversions in regards to voter education, political rallies, debates, campaigns and many more dominating the media – both traditional and new the media.

Many Nigerians, especially on the micro-blogging site, Twitter, have taken awareness on the need to register for voter card to exercise their political franchise.

Consequently, the turnout, especially by the youths, for CVR has spiked exponentially as compared with previous elections.

People, including the youths besieged and have continued to besiege INEC registration centers to register for their voter cards.

This signified that the number of youths who had completed their CVR, became accredited for voting were just a little above 10 million.

However, as of the latest update by INEC, youths between 18 and 34 years who have registered online alone for their voter card stands at above 14 million.

Although among this figure from the fresh registration, only a little above 6 million youths have actually completed the process for CVR, INEC update of Monday, 27th May, 2022 says. 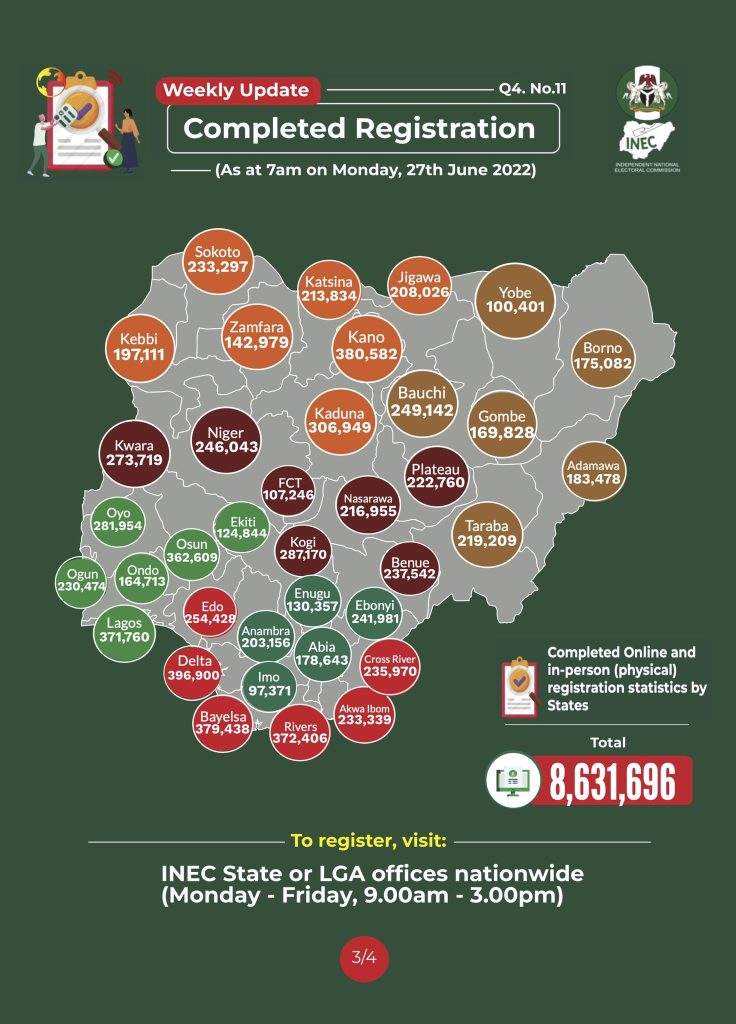 Meanwhile, the northern zones lead other zones based on the geopolitical zoning of the total fresh registrants in the country.

The Independent National Electoral Commission, INEC, in its weekly update, revealed that the Continuous Voter Registration (CVR) has risen to 10,487,972 as at 7 a.m. on Monday, June 27.

Its update shows that the north which comprises North Central, North East and north West, has recorded the highest number of registrants so far.

This is as compared with the whole of south-south, south-east and south-west combined.

Of the six geopolitical zones, the South East has the lowest number of registrants, followed by the north east.

However, while the South South has the highest number of registrants, its margin below the north in general is massive.

Figures released by INEC shows that out of the new registration, the north has a cumulative grand total of 4, 371, 353.

Conversely, the combination of the number of completed registrants from the three southern zones -South-South, South East and South West, is 4, 260, 343.

This means that the north is toping the whole of south with approximately 111, 010 registrants!

Also, this means that should elections be held based on just the fresh registrants, whoever gains all the votes from the north alone already wins the election by simple majority.

Note that the total number of people who complete their voter registration process arguably influences how the election may turn out.

Also, regions with highest number of registered voters, most times, end returning the highest votes for a candidate.

So, elections in Nigeria are decided by the number of voters who completed their registration.

After completing the CVR, they must also cast their votes properly on election days for their choice candidates. 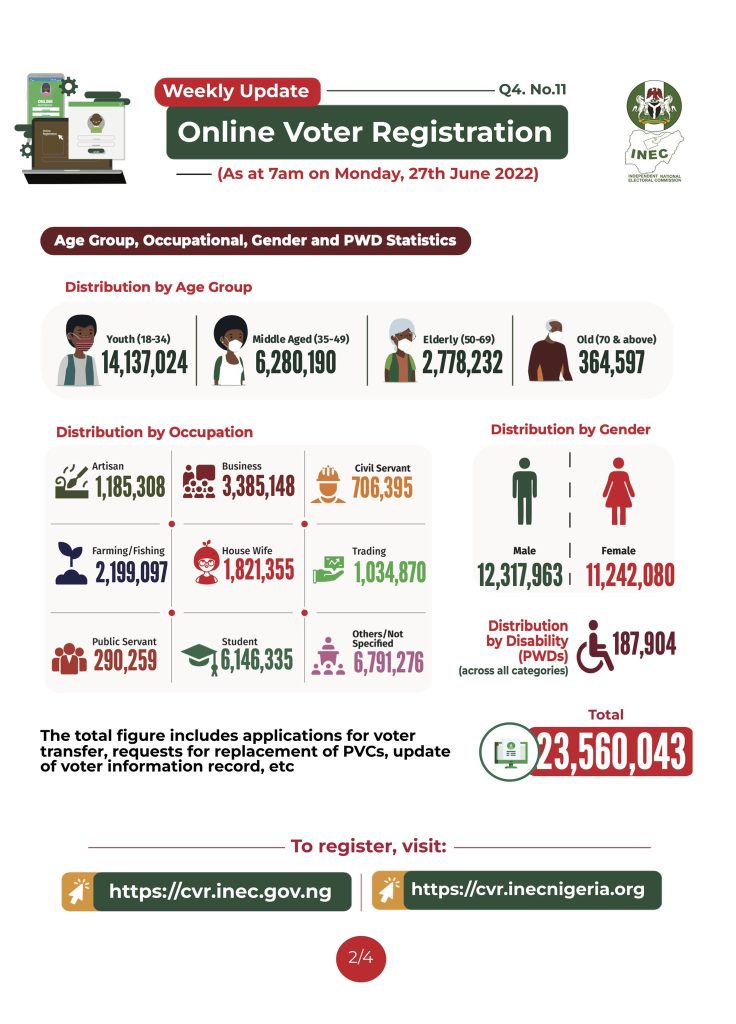 Also, INEC recorded 8, 631, 696 registrants who registered and completed their registration.

Similarly, the distribution by gender shows that a total of 4, 339, 006 females registered.

Analysis of the geopolitical zones:

So far, each of the states has the following number of fresh CVR:

Meanwhile, INEC’s fresh registration update shows the following figures for each of the states. 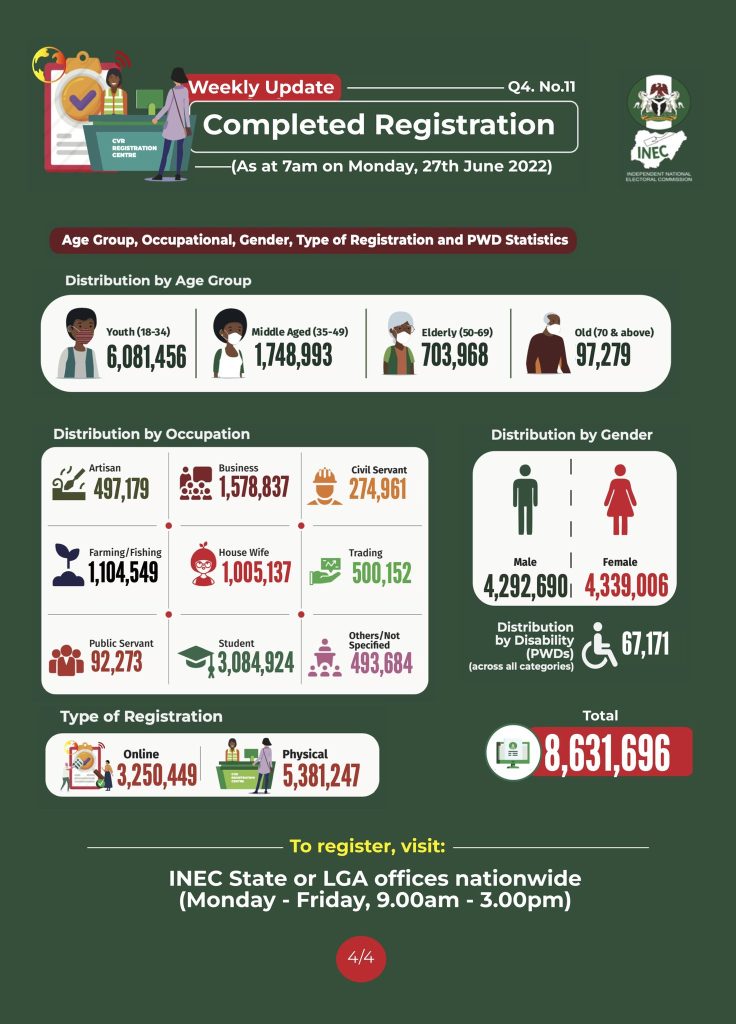 INEC’s latest CVR update shows each of the states recorded the following registrants:

The update shows that a total number of 1, 682, 778 persons registered fresh in the north west.

The grand total for the whole of northern geopolitical zones stands at 4, 371, 353.

However, as compared with the northern zones, South East comprises only five states.

This is against the six states in the northern and South West zones.

The states include: Abia, Anambra, Ebonyi, Enugu and Imo.

Meanwhile, INEC update shows the following number of fresh registrants in the states:

The update shows that the total number of registrants in South East in last update stands at just 851, 508.

They are Akwa-Ibom, Bayelsa, Cross-River, Delta, Edo and Rivers.

INEC’s latest update shows the following number of registrants for each state.

Also, the update shows that the zone has recorded a total of 1, 872, 481 fresh registrants so far.

The states are: Ekiti, Lagos, Osun, Ondo, Ogun and Oyo.

INEC’s latest update shows the following number of fresh registrants for the state.

According to the update, the South West zone has recorded a total of 1, 536, 354 fresh registrants.

The grand total of all the fresh registrants from all six geopolitical zones with completed CVR is 8,631, 696.

However, the total number of registrants in all south with completed CVR is less than the number in whole north.

Consequently, pitching the figures from the south against the north, the north is toping with about 111, 010 new registrants.

Although the CVR is still ongoing, many persons are still expected to complete their registration.

However, particularly, the number from the south East, is not very encouraging.

Also, the north East needs to improve too.

Meanwhile, INEC must ensure that people have access to registration machines and complete their registration.

INEC, must provide the registration machines as well as the personnel to register them.

This is especially in the southern zones where reports flooded the media of INEC centers either having just few registration machines or lacking them entirely.

Land Your Dream Tech Job With These Tips