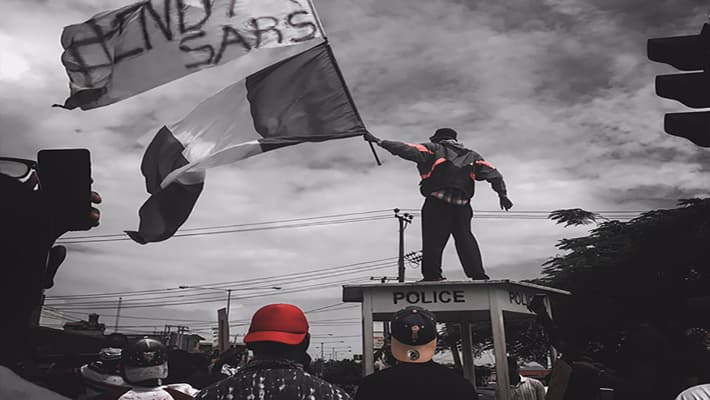 Paystack and Cowrywise have joined the list of Nigerian-based brands supporting the peaceful #EndSars protest.

As thousands of Nigerians protest against the Special Anti-Robbery Squad in Nigeria, brands are beginning to support the movement.

Cowrywise made a 1million naira donation to the Flutterwave support fund. The company’s primary objective is to help people plan expenses, save, and invest.

However, in light of the recent protest, it has committed funds to support the demand for justice.

According to Odunayo Eweniyi, Co-founder and COO of Piggyvest, the total contribution made into the Flutterwave support fund stands at 12,325,421.80.

Before other individuals and organisations joined in, Flutterwave staff already raised 2million naira.

The fund was to be expended towards medical bills of injured protesters.

It sounds awkward that such a provision had to be made, seeing that the people were leading a peaceful protest.

However, recent happenings have justified the need for the provision of the funds.

These events have also given credence to every assertion on the brutality of the police force.

On Friday, Flutterwave CO-founder and CEO, Olugbenga Agboola, expressed his grievances via a tweet.

He said, “So many of us are affected by this Injustice.” He also added that “@thefluterwave staff has also been victims of SARS and support protesters.”

Interestingly, another brand that swooped in to support protesters is the Popular restaurant Chicken Republic.

On Monday, 12 October, it showed up on the protests’ scenes to feed the demonstrators.

Social media users took to their Twitter handles to pledge their unwavering support to the brand.

Although protesters’ remarks may not constitute a guarantee of continued patronage, the brand got positive comments.

Chicken Republic doing the most.

At the time that poverty increased in Nigeria, Chicken Republic made decent 500naira food available.

Incase you didn’t hear:
I’m saying it again, Chicken Republic is the best eatery in Africa.

A brief recap of the #EndSars protest

The #EndSars protest is a social movement that started on Twitter.

The demonstration aims to dissolve a unit of the Police force called the Special Anti-Robbery Squad.

Also, the protest seeks to put an end to police brutality in the country.

The #EndSars protest has gained international attention as Nigerian youths have remained persistent in their clamour for change since the start.

Over the weekend, #EndSars was trending No.1 in the UK and the US. From October 9 – 11, the hashtag #EndSars garnered over 28 million tweets.

The role of social media

Through several tweets, Nigerians shared their stories with video evidence of how SARS members had ill-treated them.

These tweets attracted foreign audiences who lent their voice to the protest and added to its weight.

I'm glad #EndSARS is still trending. Having worked in Nigeria extensively, I have seen and heard so much. So much that is not being nurtured. Far from me to have all the answers, but I'll use this platform I have been granted for good. Dear @BorisJohnson & @MBuhari please read: pic.twitter.com/YiB1iw6Eig

Through social media, celebrities and key opinion leaders from all over the world have shown support.

Also, citizens in the diaspora have been able to contribute to the movement and petition for justice.

More Nigerian brands are beginning to come out of hiding and show support to citizens in their city of domicile.

Brands like Swipe, Voyance, and BudgitNigeria, among others, have made contributions in a different amount to support the ongoing protest.