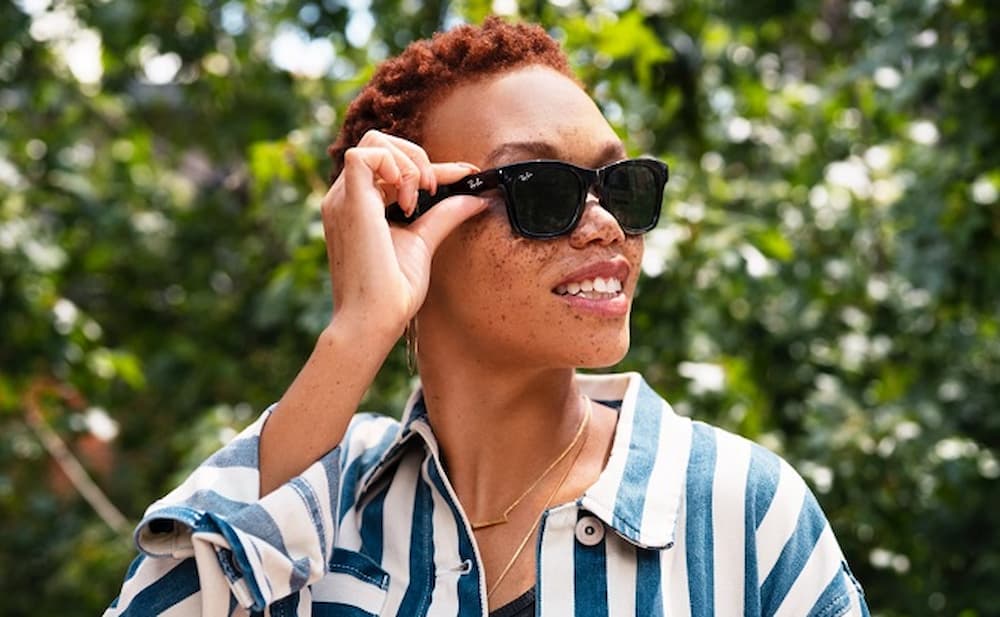 The glasses are a latest development coming to wearable as Facebook now wants you to wear computers on your faces.

Ray-Ban Stories go for a starting price of $299 for the baseline frames.

Facebook and Ray-Ban, a brand of luxury sunglasses and eyeglasses, said in a statement that their goal was to build glasses that allow users “capture life’s spontaneous moments as they happen from a unique first-person perspective.

“You can easily record the world as you see it, taking photos and up to 30-second videos using the capture button or hands-free with Facebook Assistant voice commands.”

Though, Facebook is not the first to go into smart glasses, other tech companies have dived into it years back.

For instance, while Google launched its smart glasses way back in 2013, Snap rolled out Snapchat’s Spectacles in 2016.

Although Snap’s camera-glasses have the ability to take still images and are water resistant, Facebook’s Ray-bam smart glasses are different. 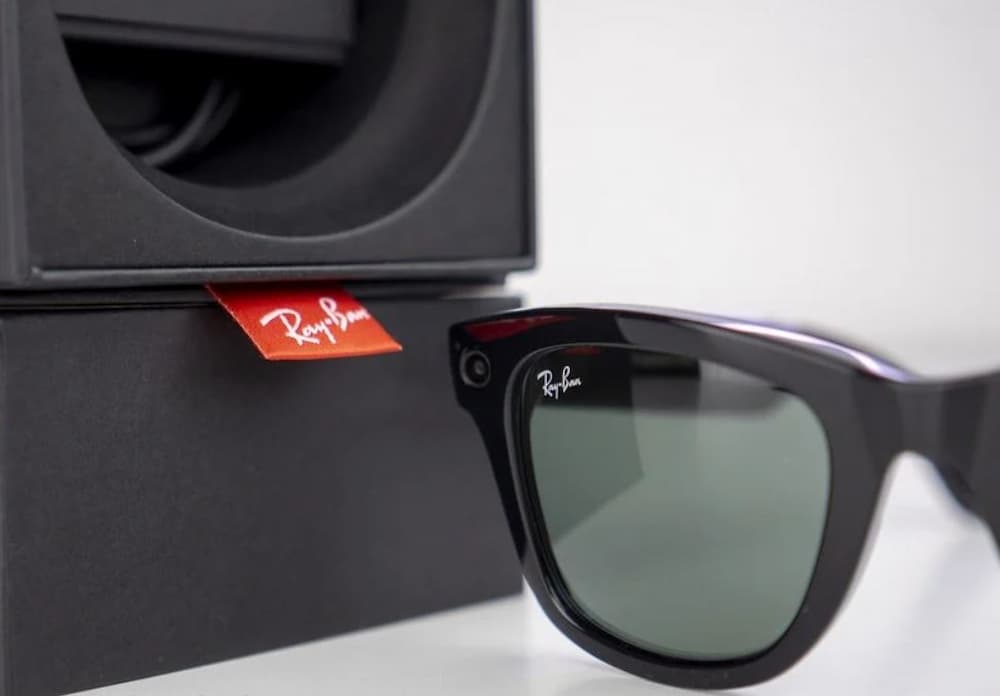 Facebook’s Ray-Ban smart glasses have components which include, two cameras, a set of micro-speakers and a three-microphone audio array.

They also come with an optimized Snapdragon processor, a capacitive touchpad and a battery that can lasts 3 days.

It has 3 microphone array that ensure quality voice recording with noise cancellation.

Equally, they come with a brilliantly designed charging case that keeps your glasses charged.

You can charge the batteries when you set them in the carrying case the company built for it.

The cameras let you “capture life’s spontaneous moments as they happen from a unique first-person perspective.”

They also have a recording LED that ensures everyone around you understands that you are taking photos or videos.

The smart glasses have cool and fashionable design and are very light.

There is no Facebook logo on them so you don’t have to be concerned if people will know what glasses you are wearing.

They look so ordinary that one can hardly know what they are capable of.

Also, they come in 20 style combinations.

Additionally, they come in different colours and models such as Wayfarer, Round and Meteor.

However, you can customize them by choosing different colours and different types of lenses.

The smart glasses come with a microphone and speakers to listen to music and a pair of cameras to take photos and videos.

Facebook’s Ray-Ban glasses’ small speakers turn them into headphones for listening to music and podcasts via Bluetooth.

A user can then pair them with their smartphones, laptops, or any other digital device.

To achieving high-quality audio, Facebook built the speakers with a bass reflex system.

This bass reflex system is a port or hole system cut into a loudspeaker enclosure.

A designer can then pass a tube or pipe-like device through it.

This enables the sound from the rear side of the diaphragm to increase the efficiency of the sound at low frequencies.

You can change the audio’s volume by swiping forward or backward.

Also, the glasses come with a voice assistant to let you do all those stuffs hands-free.

All pairs of Ray-Ban Stories come with a protective charging case.

They also come with a USB Type-C charging cable, a soft carrying case, and a set of manuals.

How to use the glasses:

You can use the glasses in two ways.

First, you can either use a voice command feature of the glasses to record videos, make calls or take pictures.

You give the glasses a voice command, beginning with “Hey Facebook and follow it by the command you want.

They then register the command and act on it.

So, you can decide to say to it, “hey Facebook, take a photo” and it will take the photo.

Also, you may say aloud to the glasses, of course while wearing them, “Hay Facebook, take a video” and it will start recording.

Alternatively, you can short press a button on the top of the right temple of the glasses to shoot a video.

Also, you can press and hold the button so the glasses can take photos.

Facebook says you can take photos and record up to 30-second videos using the capture button or hands-free features.

When you tap the button again, it stops the recording.

The Bluetooth connection is then used to transfer any photos and videos taken from Stories’ two front cameras — either manually or automatically — and can be used to share directly from the app or transfer to your phone’s internal storage. 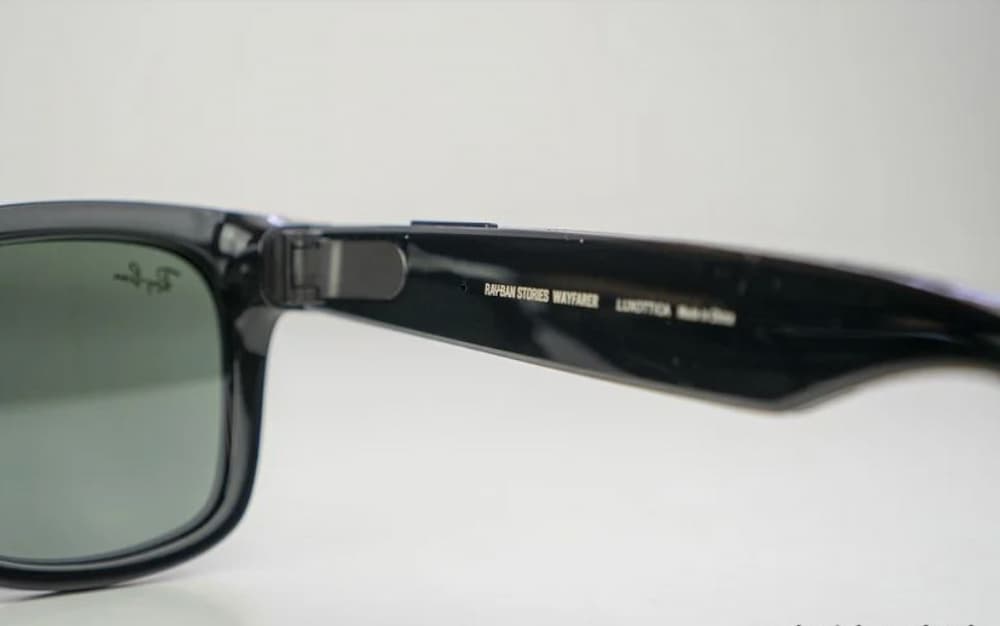 How the glasses work:

The Ray-Ban Stories glasses pairs with Facebook View, an app that the company built for the glasses.

You can do photo or video editing tasks such as: lighting and color adjustments, cropping photos, and trimming videos.

Also, using the automated flashback and collage modes, you can combine up to 10 videos into a quick 15 or 30-second montage reel.

You will also reorder clips, change their length in the montage, and even choose from around two dozen songs (or no music) to add to the collage.

Since Facebook’s Ray-Ban glasses come with G-15 Green lenses, it they’re only good for wearing outdoors.

This is because, sunglasses are largely useless indoors if you’re not an ’80s pop singer.

Also, since they look and feel like a relatively normal pair of glasses helps increase the possibility that you’ll actually want to wear these daily.

Facebook says the batteries can last for 6 hours in a day.

However, you must know that the 6-hour rating is based on more conservative daily use.

This usage can be an hour of listening to music, various phone calls, and a few pictures and videos.

Meanwhile, It only takes 30 minutes of charging in the case to refill 50% of the battery.

Also, the glasses lack any kind of water or dust resistance.

So, be careful how you use them to avoid damaging them.

You should buy this if …

You shouldn’t buy this if …

Ray-Ban Stories are designed to look and feel like a normal pair of Ray-Ban glasses, but provide you with an experience you didn’t expect.

What to do if Your Phone is Tapped or Being Monitored: Sure Hacks and Codes