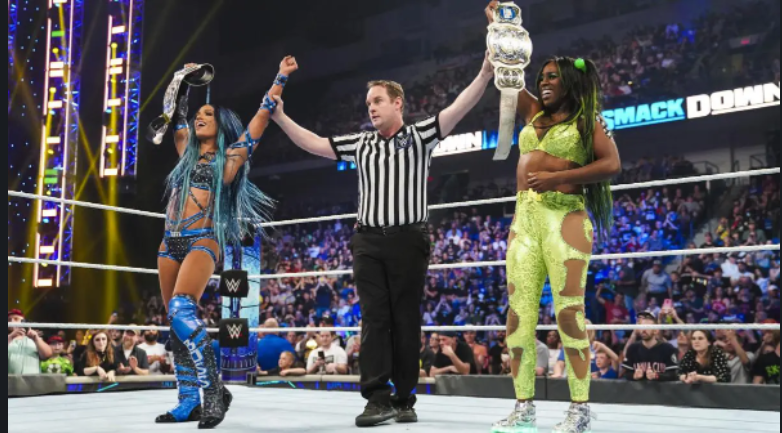 Monday Night Raw’s main event at World Wrestling Entertainment (WWE) was was forced to change after two female wrestlers, Sasha Banks and Naomi left ahead of the show.

On her Twitter followership, she only currently follows only 6 accounts – Naomi, John Cena, Tamina Snuka, her cousin Snoop Dogg, and two fan accounts.

Sasha Banks and Naomi walked out of this week’s Monday Night Raw despite having a match in a six-way main event.

The Raw event had announced that a six-pack challenge would take place in the main event of the show.

The challenge was to determine the next contender to Bianca Belair’s Raw Women’s Championship.

However, Sasha Banks and Naomi staged a walk out of WWE eight hours before the show over claims they were not properly recognised.

Banks had an issue with the original creative plans for the six-pack challenge.

She had a meeting with Vince McMahon ahead of Raw.

But reports claim that Vince McMahon chose to go with his original plan instead of changing it as Banks had complained.

Conversely, Banks was unwilling to back down on her concerns.

Banks then made the decision to leave the show, and her tag team partner, Naomi left with her.

Naomi was also booked as part of the six-pack challenge.

Meanwhile, Becky Lynch had alerted one of the announcers at the event, Adam Pearce.

She had complained that she had seen Naomi and Sasha Banks leave the arena.

Also, she said it was unfair to her that the six-pack challenge could no longer take place.

However, Pearce swiftly tried to save the moment.

He immediately declared that the main event would now be a one-on-one match between Becky Lynch and Asuka.

He said the winner between the two would then later face Bianca Belair at Hell in a Cell.

Meanwhile, WWE has since released a statement on the matter.

“When Sasha Banks and Naomi arrived at the arena this afternoon, they were informed of their participation in the main event of tonight’s Monday Night Raw.

“During the broadcast, they walked into WWE Head of Talent Relations John Laurinaitis’ office with their suitcases in hand, placed their tag team championship belts on his desk and walked out.

“They claimed they weren’t respected enough as tag team champions.

“And even though they had eight hours to rehearse and construct their match.

“They claimed they were uncomfortable in the ring with two of their opponents.

“Though they had matches with those individuals in the past with no consequence.

“Monday Night Raw is a scripted live TV show, whose characters are expected to perform the requirements of their contract.

“We regret we were unable to deliver, as advertised, tonight’s main event,” it continued.

The statement further explained that the Boss ‘N’ Glow Connection relinquished their Women’s Tag Team Titles before walking out.