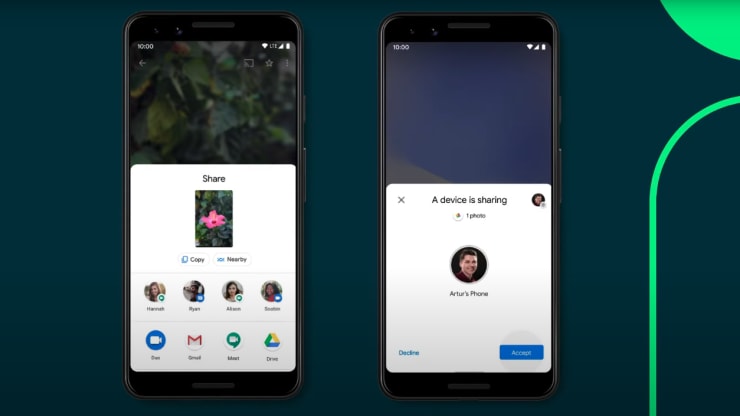 O, happy day! We have exciting news for all android users. No more feeling left out or feel inferior because your phone cannot do what the iPhone can do for you.

We are so excited to dish this out for you that we’re hesitant to deliver it carefully and safely!

Google announced on Tuesday, Nearby Share, which is the Android version of Airdrop for IOS.

The Nearby Share feature would allow you to send pictures, files, links, and many more directly to other Android devices.

Apple did it first

We’re sure you’re aware that a device feature like this is pre-existing. Just as we said earlier, Apple has had the Airdrop feature on its devices since 2011.

So, Google is a bit backtracked, just bringing its version out. But as they say, better late than never.

The relevance of being able to send anything at a fast pace is underestimated. You might want to send a document on the spot. Then you think of all the things you have to attach to your email. That can discourage you, big time.

When can you have it?

The new feature would become effective right from today, beginning with the Google Pixel phones and the Samsung phones.

Does your device support the feature?

There is a catch; however, this feature would only support Android devices running on Android 6.0 and newer.

Come to think of it, that’s not so bad. Anyone using an Android device now would have access to Android 9 and above. So enjoying this feature should be a hoot.

The fantastic thing about using Android devices is that it updates itself. Especially Samsung. Everyone knows Samsung is always updating something, but in the end, it’s worth it.

Basically, if you have bought an Android device between 2015 and now, you’re 100% covered.

How to use it?

To make use of this feature, all you have to do is select the content you intend to share, drag up from the bottom of the screen, and tap Nearby Share.

Afterward, you’d be provided with the option of sharing the file with nearby Android devices.

Just like the IOS airdrop, Google said you could share and receive files anonymously. If you’re not interested in that kind of thing, you can make yourself invisible.

In a matter of months, you’d also be able to share Chromebooks. Again, just like what the iPhone and the Mac already does.

Google also said soon; this feature would be made available to more than just Google pixel and Samsung devices.

TikTok Appears To Be Worth Up To $30 Billion, Based On What Microsoft Is Willing To Pay