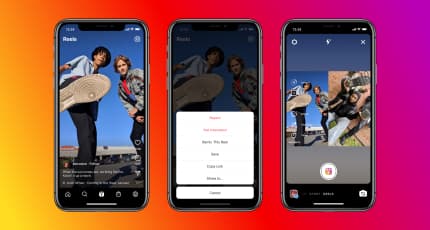 Instagram has released a new feature called Remix. Quite frankly, it’s a lot like one of TikTok’s very popular features called “Duet”.

Seriously, can everyone just pause with the cloning already? At least for the next few months.

Only three weeks ago, Netflix came through with a short video sharing feature that worked just like TikTok.

The Streaming giant called it “Fast laughs”, and yes, it lives up to its name. Fast laughs could get you all cracked up in just about seconds.

While I find the contents under the Fast Laughs category enjoyable, the consumer in me craves a novel idea.

Hence my frustration at clones. That should be enough ranting for now.

For those who do not know what the Duet feature on TikTok is, I’d show it to you.

Looks familiar? Of course, it does. This was one of the major features that blew up TikTok.

With the feature, you can create a video next to one that already exists and upload both as one mixed video.

Now, this right here is what Instagram’s new “Remix” feature is all about.

New to the Remix feature? Obviously, you are. We all are ‘cos it just launched. However, here’s how you can access it.

More on how to use it 👇 pic.twitter.com/IQaRtH4pUN

You can create your remix reel in real-time using the record button at the bottom of the screen. However, you can also upload a pre-recorded video from your gallery.

You can edit the video using the tools lined up to the left. Once all is set, you can also increase/reduce the volume of the original video or that of your video, or even add a voice-over to create whatever effect you desire.

According to a disclaimer from Instagram, new reels will be available for Remix by default. However, users will have to enable the Remix function for their old reels if they want it featured in a video mash-up.

It all started two years ago

Instagram and TikTok have been at loggerheads since TikTok’s sudden rise and adoption two years ago.

Instagram’s first clone of a TikTok feature was with reels. Soon after, Instagram struck again when it stopped promoting TikTok reposts.

Looked more like a defensive technique though, embellishing the fact that business is war.

Now that it has cloned the duet feature, we wonder what the streaming giant’s next move will be.