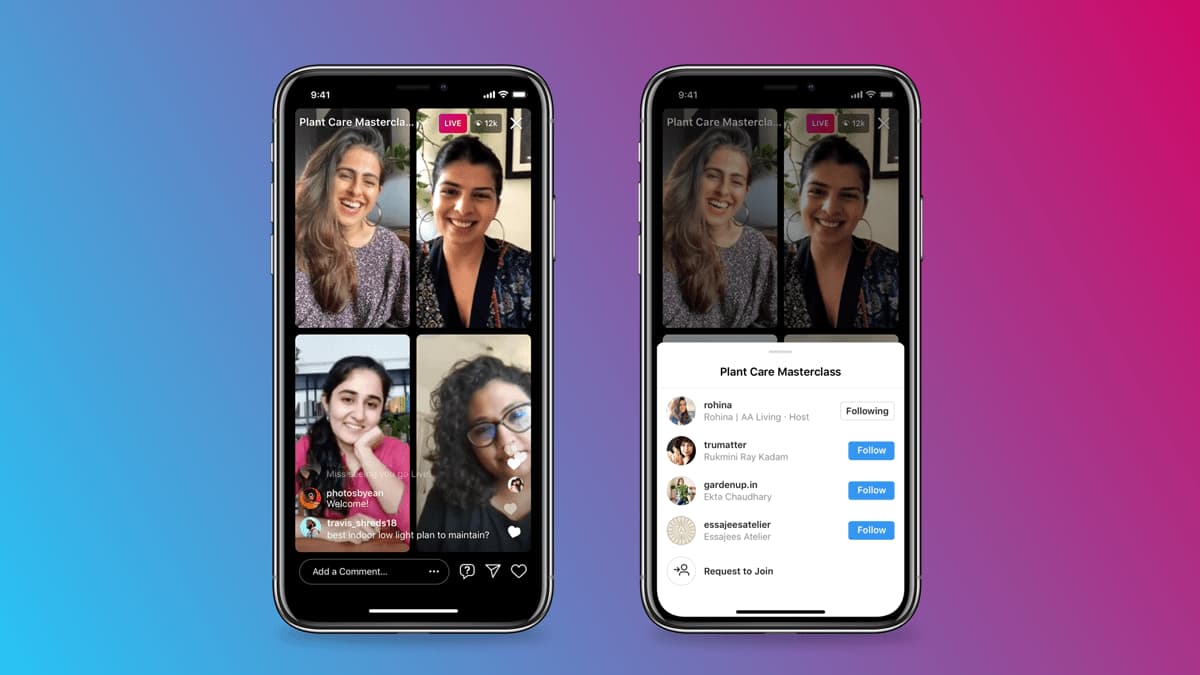 Instagram announced a new feature on Monday, Live Room. It said the feature would be available globally.

With Live Room, four users can go live at once, doubling the afore users eligibility.

This means that a user can now go live with three others using the Live Room feature.

Previously, the live feature was only eligible for a user with one other joining.

However, Instagram said it is letting its users ”double up.”

This is great news for influencers, celebrities and creators who have frequently been using the IG live feature to reach and connect more with their fans and audiences.

Compared to the former, when it was limited to just two users, the audience for discussions was smaller.

With the new Instagram Live Room, going live with more people would mean a larger audience and more money.

In addition to its announcement, Instagram said in its blog post that ‘doubling up’ the live feature would be a breakthrough for persons to push out more content.

It would encourage people to host a podcast, talk show, Q and A, host a hot jam on the platform, hang out, and collaborate alongside others.

Also, the platform would give leverage for more people to build a business and earn money.

However, it said it wouldn’t be available to users who have had their live access revoked due to a violation of its community guidelines.

Also, it won’t be available to users whom any of the live goers has blocked; they won’t join the live stream.

Live Room would be the ‘best place’ for creators

Instagram said the Live Room would the ‘best place’ for creators.

It added that the feature would serve as a place where the creators could have meaningful conversations with their audience.

There would a surge in growth as the following users will see the notification and tune in, and if it’s intriguing, invite others to join.

With Live Room, viewers can extend their love to their favourites by purchasing badges for them.

Also, they can use other money-raising features like Shopping and live fundraisers.

The moderator control is basically to control the Room’s activities; the report feature is to make a report of violation cases, while the block comment feature stops people from commenting on the live stream.

How does Live Room work?

Users should swipe left and pick the Live camera option, add a title and pick options to add guests to the Live Room.

People would have to request to join the live stream, so you select any request of your choice to go live with the person.

However, when you start a live video, you remain at the top of the screen, then you add others to join in simultaneously or at a time.

Live Room might be another Clone app, after all

Clubhouse users require a phone and voice. While with IG live Room, it shows a user’s appearance to the public, requiring them to look good.

However, taking that the platform would have more than its initial proposed two individuals on its live stream, it could be easier to say that it shares similar characteristics with the audio-only app, Clubhouse.

Clubhouse chatroom app allows individuals to go online at once and can contain more than 10 participants in a room.

However, it is limited by its invite-only restriction and available for only iOS users.

But with Live Room, this might be a gap to leverage on.

Users who desire to be on the Clubhouse app to participate in discussions can join Lives streams on IG and hear their favourites speak on several interesting discussions.

Also, as an audience on Live Room, you don’t need to make a request; both Android and iOS users can tune in to hear conversations and add comments through the comment section.

While Clubhouse is an audio-only app with no room for comment or face-to-face discussion.

However, Instagram said it would be offering an audio feature in the coming month.

This might be a big plus to the social page, putting it in direct competition with Clubhouse.