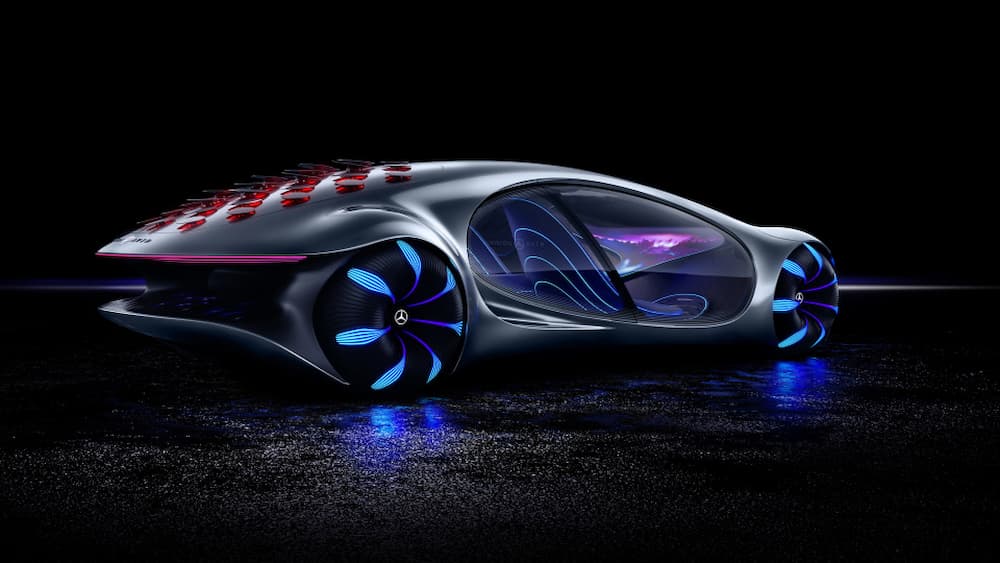 Mercedes Benz Car You Can Drive With Just Your Mind? Yes, you heard it right.

Mercedes Benz has unveiled a number of new cars that use mind control systems.

What it simply means is that you can drive the cars with just your thoughts!

You don’t need to touch or say anything – just your thoughts and you set the car moving! Isn’t that awesome?

Well, the concept is Benz’s innovation at merging together man and machine in a rather remarkable experience.

The company unveiled the Advanced Vehicle Transformation (AVTR) cars at the IAA Mobility 2021 show in Munich this week.

“At the IAA MOBILIY 20201 from September 7th to 12th in Munich, the brand with the three-pointed star will present how BCI technology works and, for the first time, give a preview of mind control as a new dimension of human interaction with the vehicle.”

Benz clearly hopes to shake the transport ecosystem with its research and development of brain-computer interface applications in the cars.

The artificial intelligence cars are the car company’s latest concept that’s turning heads and wowing lovers of the brand.

With no wheels, no buttons or dials inside the cars, the vehicles have only smooth surfaces acting as display.

How they function is equally remarkable. You can interact with one of the car’s systems through a brain-computer interface (BCI). 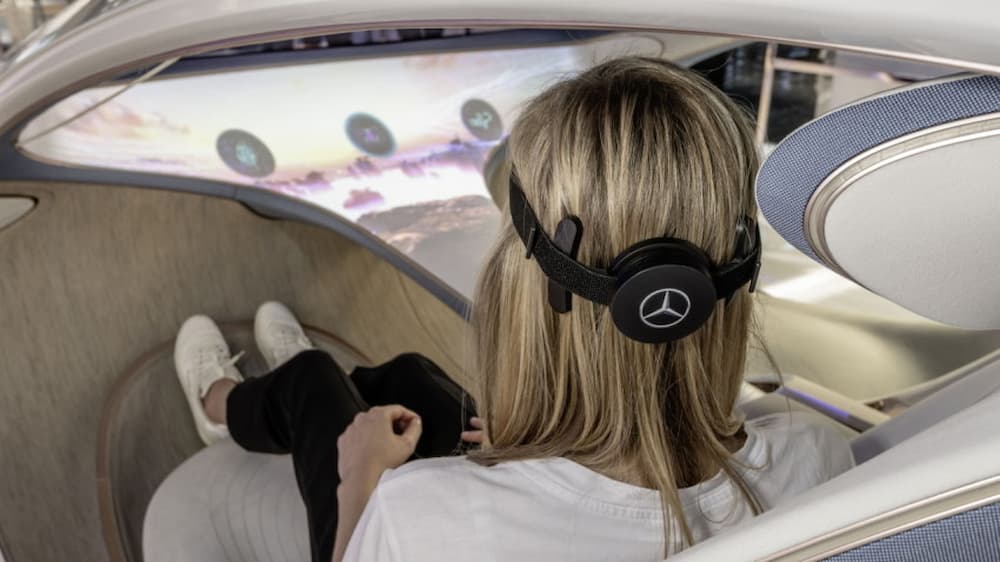 What is a BCI technology?

It is a technology system that allows a human brain and an external device to talk to one another.

With the BCI technology, a person can exchange signals with machines or technological devices such as the Mercedes Benz cars.

BCI gives humans the ability to directly control machines, without using the physical body parts like your hands and legs.

How the BCI works:

The BCI technology works by measuring the activity of the central nervous system (CNS) and converts it into artificial output.

This process, therefore, changes the ongoing interactions between the CNS and its external or internal environments.

BCI technology system is commonly used in treating paralyzed patients and those with disorders of consciousness.

However, Mercedes Benz has figured out how to tap into this system for the automobiles.

Commenting on the concept, Britta Seeger, Member of the Board of Management of Daimler AG and Mercedes-Benz AG says thus:

“BCI technology has the potential to further enhance driving comfort in the future, for example.”

He added, “Mercedes-Benz has always pioneered intelligent, innovative solutions to provide our customers with the best product and service experience.”

Seeger also said “BCI technology works completely independently of speech and touch. This opens up revolutionary possibilities for intuitive interaction with the vehicle.”

“BCI technology can make it possible to relieve the user even more, in order to be able to focus on the driving experience. The VISION AVTR underlines the courage and pioneering spirit of our brand and is exactly the right concept to test and further develop BCI applications. This concept vehicle impressively depicts the future of mobility in which man, nature and technology are in harmony with each other.”

The company also said in a post that visitors at the exhibition “will experience how quickly their own brain connects with the vehicle – similar to the neuronal connection between the Na’vi and the nature in the visionary Hollywood blockbuster “AVATAR”.

“By focusing on points of light, they can use the power of their thoughts to perform various functions in the digital VISION AVTR worlds displayed on the dashboard: for example, generate wind, grow plants, select parking spaces to charge or turn day into night.” 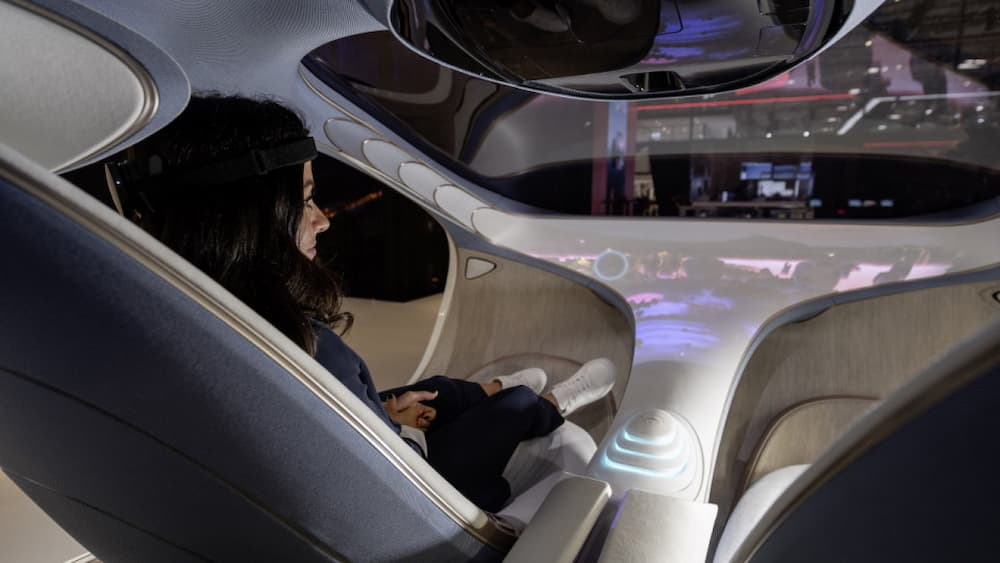 How the cars work:

When you enter one of the cars and place your hand on the control, the interior comes to life.

At that point, the vehicle recognises you or the passenger by their heart rate.

Then, a simple raising of the hand projects a menu selection.

The car projects the menu selection onto the palm of your hand.

This, in turn, allows you to intuitively choose between different functionalities such as acceleration, reverse, etc. 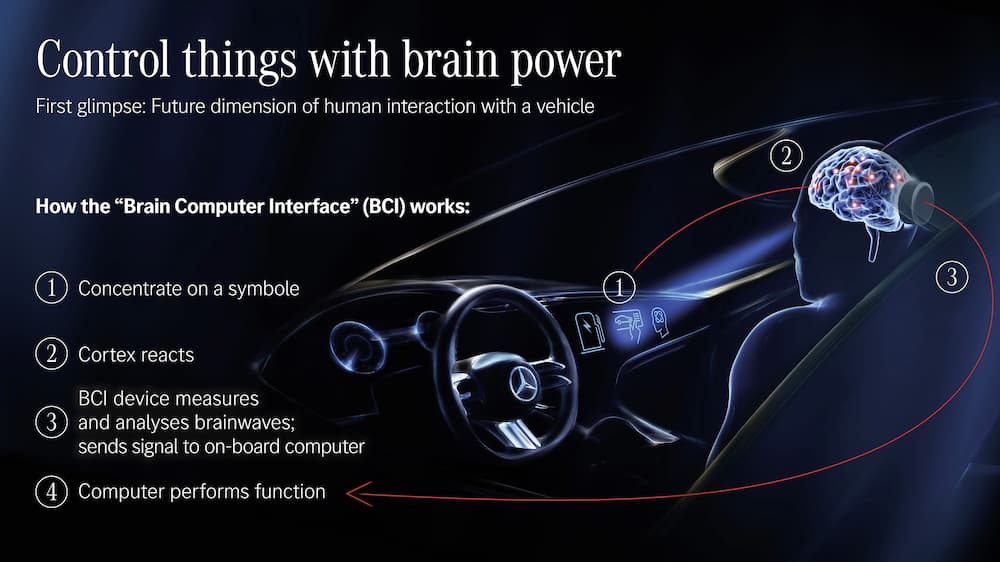 How to drive the Mercedes Benz Mind Control Cars:

Since the cars have no wheels, no buttons or dials, one would require some devices to drive the cars.

Fist, the driver will wear a BCI device with electrodes attached to the back of their heads.

Then, he or she will adjust the calibration and this takes just a minute.

After this process, the BCI will begin to measure brain waves and trigger signals in form of light dots.

It records the brain activity and establishes a direct connection to the vehicle.

Then, the BCI projects light dots on to the digital dashboard, which the driver can focus on to trigger a specific action.

Also, the BCI device detects which light dot is the focus and initiates the desired response.

What it means is that the BCI measures your brain waves.

It then sends signals to the Benz car’s dashboard in form of light dots that the car can read and interpret.

Also, the brain reacts to the visual stimuli on the dashboard.

So, if you think of moving the car, pulling over or making a reverse, the BCI sends such signals to the car.

When the car receives such signals, it interprets them with the speed of light and executes them.

Also, you can Select the navigation destination by thought control, switch the ambient light in the interior or change the radio station.

The design and what the cars are made of:

These designs combine the exterior and interior into an emotional whole.

The car is made of sustainable materials such as vegan DINAMICA® leather made from recycled materials.

Also, Mercedes made the car from fast-growing Karuun® (rattan) that can only thrive in biodiversity.

Another material is the organic, compostable battery technology that creates a closed-loop economy.

Surely, the concept cars are what Mercedes wants to demonstrate what could be possible in the near future.

With the world relying deeper in tech for almost everyday life, Mercedes is not taking the back burner.

This driverless, no wheels or buttons cars will surely enrich the tech choices that people will have in terms of automobiles.

However, if and when Mercedes-Benz launches the vehicles with thought control depends on a number of factors.

These factors that everyone must consider include how reliable the cars would be.

Will they guarantee upmost safety? Will people be safe in such cars that only functions by controlling the mind?

What if the driver sends confusing signals? What would happen?

Also, another factor to consider is how easily a driver can change their focus while also concentrating on the road ahead.

Well, the mind controlling cars are a welcome innovation so long as they promise utmost safety and reliability.