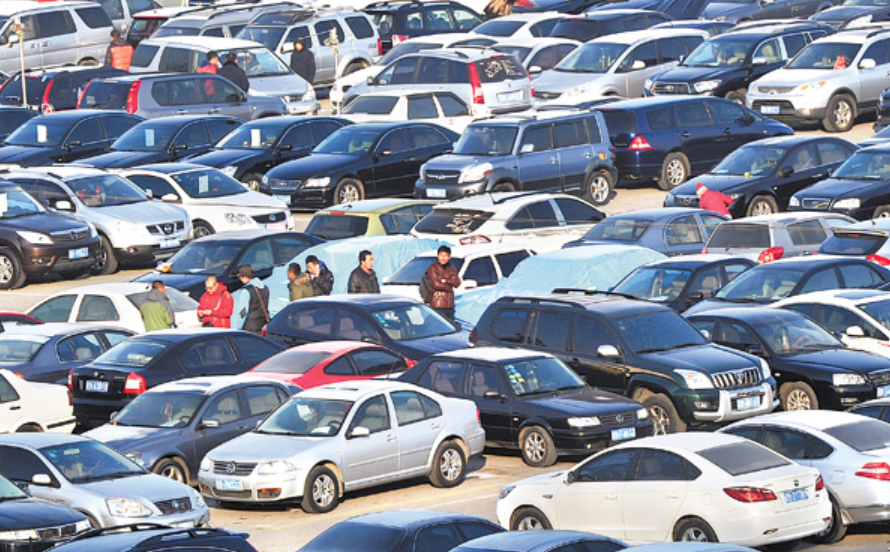 Ports congestions have remained a serious worry for Nigerians.

This is because the congestions have a direct impact on the various socio-economic activities of Nigerians and Nigeria as a country.

Beginning from the motorcycle rider through the roadside vendor and down to the businessmen and women in the markets, as well as trickling down to establishments and politicians, everyone is affected either directly or indirectly.

The congestions block businesses and, for those in Lagos, especially in Apapa area, they further cause unending traffics among other issues of worry.

Also, prices of goods and services skyrocket, taking encouragements from the congestions at the ports.

While the governments at the states and federal levels try to proffer solutions to the congestions, some of the policies they introduce to generate more revenue from the ports, however, tend to be, rather, antithetical to making things easier for the people, especially at the ports.

So, the final consumers always bear the brunt by paying more to buy less.

Meanwhile, this development further escalates when the parties involved, especially the clearing agents and the Nigerian Customs Service (NCS), often lock horns over such unfavourable policies.

This baptized and reintroduced CET levy has further led to a new face-off between the Nigerian customs and the clearing agents.

The 15% Levies, Customs and The Clearing Agents:

The crust of the matter is that clearing agents, who had already been tensed with the introduction of a Vehicles Identification Number (VIN) for the valuation of imported vehicles, were suddenly hit with the CET levy by Customs which added on their burdens, a further 15% higher cost of clearing imported vehicles in the country.

Note that the NCS had, early last month, reviewed duty on imported used cars from 35% to 20%.

This review, according to NCS, complied with the directive from the Common External Tariff (CET) of the Economic Community of West African States (ECOWAS).

Meanwhile, the NAC levy had generated much upheaval because, instead of taking 2%, the NCS yanked it up to 20% and above, claiming that it was a directive from the Federal Ministry of Finance which it was implementing.

But as the dust tried to settle following the temporal suspension of the levy, the Nigerian customs, again, introduced CET – a new 15% levy which the clearing agents described as NAC levy coming back through the back door.

So, the Service, seemingly not satisfied with the ECOWAS directive on duties, reintroduced the 15% NAC levy, though under the CET nomenclature and this enabled the Service to regain the 15% from the former import duty which it reviewed.

This return of the levy on imported used vehicles, pushed the duty payable on imported vehicles back to 35% that it was before the directive from ECOWAS.

So, used vehicles imported into the country would still pay 20% import duty, plus a 15% NAC levy, amounting to 35%.

In a statement by the spokesperson for the NCS, Timi Bomodi, it defended the levy thus:

“This is in line with the World Customs Organisation’s five-year review of the nomenclature.

“The contracting parties are expected to adopt the review based on regional considerations and national economic policy.”

“The nation has adopted all tariff lines with few adjustments in the extant CET.

“As allowed for in Annex II of the 2022-2026 CET edition, and in line with the Finance Act and the National Automotive Policy, NCS has retained a duty rate of 20% for used vehicles as was transmitted by ECOWAS with a NAC levy of 15%.

But the clearing agents and other Nigerians believed the 15% NAC levy was illegal and contravened financial acts.

Consequently, the agents intermittently suspended vehicle clearances in the country.

This resulted in a further congestions and price hikes for, especially imported cars.

In a statement, the President, National Council of Managing Director of Licensed Customs Agents (NCMDLCA), Mr Lucky Amiwero, said the levy is not backed by any law in the country.

Amiwero, a former member of the National Automobile Commission committee, said the levy is illegal.

He said, “Though the Federal Ministry of Finance changed the heading to Common External Tariff (CET), clearing agents still describe the new levy as illegal. It is not backed by law in Nigeria.”

“There is no such thing as CET Levy of 15 per cent either on motor vehicles or goods.

“Well, the issue about that is not clear yet, because what the law says is that the 15% is on the NAC. And on the NAC law, I was a member of the committee meeting that nullified NAC, and it is only 2% for the NAC law.

“The shifting from NAC Levy to CET, both 15 per cent, by the NCS, contravenes the principle of World Customs Organisation, Kyoto Convention on the Simplification and Harmonisation of Customs Procedure.

“The only approval is on ECOWAS Trade Liberalisation Levy (ETLS) of 0.5 per cent; so, the introduction of CET Levy is strange to our domestic law and the ECOWAS Convention on Import Duties and Levies Assessment and Collection.”

“It also contravenes the World Trade Organisation under the Agreement on Trade Facilitation Agreement which core principle is predictability, consistency and transparency on trade information, fees and charges imposed in connection with importation and exportation.’’

“So, bringing NAC to 15% is illegal. The Finance Act of 2020 has provisions for reducing vehicles, and there is no levy on the Financial Act.

Meanwhile, this development has further opened a can of corruptions, shenanigans and bureaucratic bottlenecks taking place at the ports.

The Corruptions, Shenanigans and bureaucratic bottlenecks:

Keep in mind that the association of truck owners, under the aegis, Council of Maritime Transport Unions and Associations (COMTUA), according to available reports, mulled the idea of suing the Nigerian Ports Authority (NPA), another agency overseeing activities at the ports, for what it described as alleged extortion and activities of Truck Transit Park (TTP) and other corrupt practices at the ports.

It also decried the proliferation of extortion checkpoints that force truckers and clearing agents to pay various and compulsory illegal levies.

Moreover, reports have claimed that myriads of corrupt activities characterise processes of clearing containers at the Nigerian ports.

These corrupt activities range from huge extortions at many illegal checkpoints;

Bureaucratic bottlenecks perpetrated by the services’ personnel in a bid to extort money from agents, to the tyrannical activities of customs officers who even arrogantly employ physical assaults on civilians.

A recent case is that of Samson Nwachukwu, a media aide to the Delta state Governor, Ifeanyi Okowa, who was slapped by a customs officer along the Benin-Agbor expressway.

Also, reports further reveal the alleged tyranny from personnel of other agencies.

Some of the agencies include LASTMA, Police, Customs and  NPA.

Others are the RRS, Lagos State Committee on Abandoned and Disused Vehicles and the military.

Adding to the list of corrupt practices are, the various checkpoints mounted and co-manned by officers and local touts (Agberos).

The touts block the roads and use weapons to threaten and force drivers of container trucks, as well as drivers of cleared new vehicles going out of the ports and adjoining roads, to pay some illegal levies or else, their vehicles would be damaged by the touts or the personnel would illegally impound them.

Likewise, other sharp practices that further compound the congestions at the ports include:

Further confirming this developments, the former MD of NPA, Mr. Yusuf Bello, had revealed before lawmakers that illegal checkpoints sprang up to extort from the people.

“The first problem is the issue of extortion.

“There are multiple check points that are just springing up other than that of Nigerian Ports Authority.

“And these checkpoints are manned by Police Officers, atimes you’ll find many in Naval uniform or Military escorting vehicles illegally.”

“And it’s really affecting the flow of traffic, mostly at night.

“Now, it has graduated to Area Boys being the fifth man or whatever the call it.

“They stand there to collect this money on behalf of the uniformed men.”

“There has been a proliferation of illegal checkpoints along the terminal routes.

He said the checkpoints are “with attendant extortion of the sum of N5,000 per checkpoint.”

Adegboruwa said despite the mutually agreed sum of N10,000 payable for an entry permit into the terminal, TTP now extort a whooping sum of N31,250.

The solicitor also noted that “there have been cases of connivance and abuse of office by the holding bay operators.”

He said “some agencies of the Government arrest and impound our client’s members’ truck to illegally extort money from them.”

“The continuous harassment and extortion often lead to further arrests and detention of our client’s members.”

“There has been consistent violation of movement procedures and illegal parking of trucks on the express road.”

He said this violations are perpetrated “by some preferred truck drivers.

He said these “modus operandi are antithetical to the aim and purpose of the Electronic Call Up Regime.”

These corruption and extortions by the various agencies, personnel and touts have continued to worsen the condition of the ports.

This has culminated to very high cost of goods and services.

It has also increased the cost of doing business in the country.

For instance, operators and agents have continued to bemoan the bureaucratic bottlenecks at the ports.

The bottlenecks have further compound the whole issues.

They said they have to go through “about 20 different tables to get approval for clearance of containers.”

The processes last for over three to five days.

Other administrative bottlenecks include “three free days for clearance and issuance of debit note in advance to cargo bound locations.”

“Also, refusal to receive hard copy manifest which impact on turn around period.

Others are “reschedule of notice on vessels without prior notice and absence of call-up system, among others.”

These are what they face at ports.

Meanwhile, the Nigerian Ports Authority had told Nigerians that there are over 6,000 abandoned containers across ports in the country.

“It had equally said that the abandoned containers have been the cause of the continued congestions at the ports.

Consequently, the congestions and bottlenecks at the ports cause exporters to lose around N90b in damaged products.

The Shippers Association of Nigeria revealed this.

This is because of the recent introduction of the 15% levy.

Also, the downing of tools between Customs and Clearing agents adds to this.

Therefore, should the new levy stay put, then prices of, especially imported vehicles, will further surge.

But the agents have come hard on the levies as well as other forms of corruption at the ports.

So, should the situation persist, more Nigerians will face further hardship.

An agent, Akintoye Ojo, said the development will greatly affect the transportation sector.

Ojo has license as a Nigerian Customs Agent.

“Cars will be very expensive, and the common person will not be able to afford them.

“A common person will not be able to afford a car. Owning a car is not an issue if you have a good transportation system where things work properly.

“Even if you don’t have a car, there are some countries that no one will notice.”

Similarly, a former President of the Chartered Institute of Taxation of Nigeria, Teju Somorin, said thus:

“Prices of transportation may go up. Uber and Bolt that use imported vehicles for their businesses may have to raise their fares.”