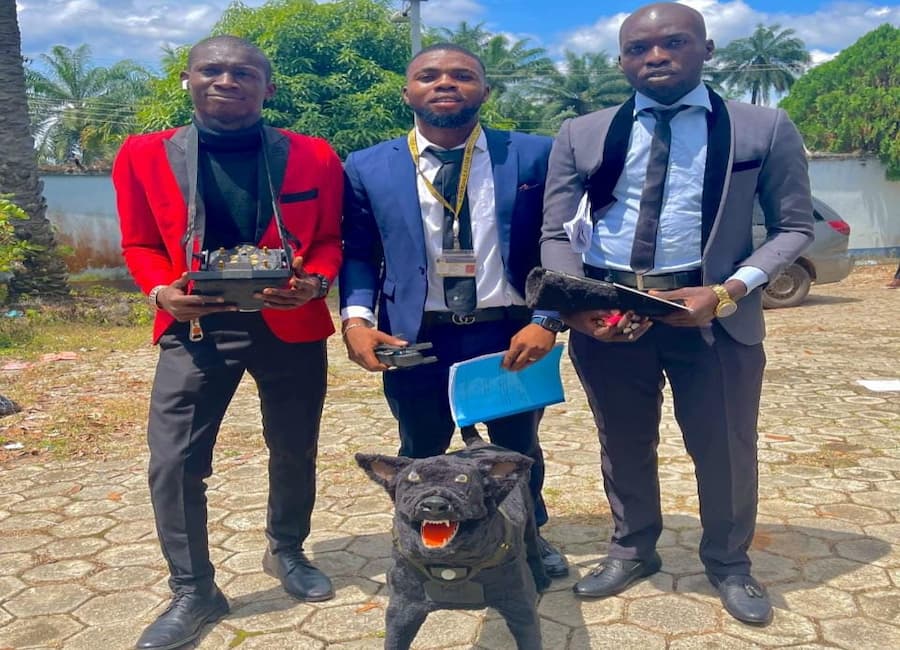 According to the students, the robotic dog will help tackle the escalating insecurity problem in Nigeria.

The students, Aiyegbeni John Oshoke, Loiki Charles Olalekan, and Adeyi Stephen Olabisi are of the Department of Physics and Electronics.

In an opinion piece by Abbas Badmus who wrote from FHA Lugbe, Abuja and seen on The Guardian, the students found a way to integrate robotics in the area of security.

The robotic dog will help fight insurgency, banditry, kidnappings and ceaseless killing of people within the rural and urban areas of the country.

This s coming barely a couple of months after Amazon introduced a robotic dog it called Astro.

Astro also patrols the owner’s house and alerts of dangers.

Composition of the dog:

The student inventors said the robotic dog has a combination of motion and sound sensors.

The sensors enables he dog to bark in the same manner that a real dogs does when they notice a strange movement.

It can also bark when it hears a sharp sound within their immediate environment or coverage.

The dog has slot for connecting a video or audio-visual device like CCTV or camera for viewing.

While explaining how the robotic dog works, the inventors said thus:

When the dog senses a movement intruding sound, it starts barking to alert the owner that something is happening around the location.

With the audio-visual device which the owner connects to the dog, he or she can view whatever is in the dog’s view.

The dog moves around the area while barking.

The student inventors said the reason for the audio-visual is to keep the owner out of risk.

The owner does not have to go to the hazardous area but can see everything around the area through the dog.

Also, with the recording device attached to it, the owner can remotely record and take pictures of the happenings around the area.

So, the owner cannot be in harm’s way by going outside to know what is happening.

The students also added that the robotic dog is interactive.

It can interact with its owner just like a live dog.

According to the inventors, “The major reason for this robotic dog is to tackle security issues in the country.

They said the Dog can also “save the owner from putting himself/herself in danger.”

Although the security dog can function properly, it has some challenges that may limit its efficiency.

Some of the challenges include, lack of funding, lack of investors, power supply and poor internet connection.

To tackle these challenges, the inventors have called on all stakeholders, especially the government to invest in the project.

They called on the public institutions, organisations, and individuals to invest in the project  which they believe help solve the country’s insecurity problems.

The student inventors expressed confidence that’s the robotic dog is “a very good and big innovation.”

They also called on the National Information Technology Development Agency (NITDA), and private enterprises to invest in the initiative.

Also, they called on the fintech companies in the country and beyond to support the innovation by investing in it.

The invention of a robotic dog to fight crimes and insecurity comes at a time the country needs it most.

Also, the invention shows the talent domiciled in our youths which the government must harness to improve the country.

The government and other stakeholders can harness this talent by investing in the youths.

Also, this invention further places Nigeria among countries making waves in the area of robotics.

Creators Can Now Get Paid From Instagram Badge Feature: See How