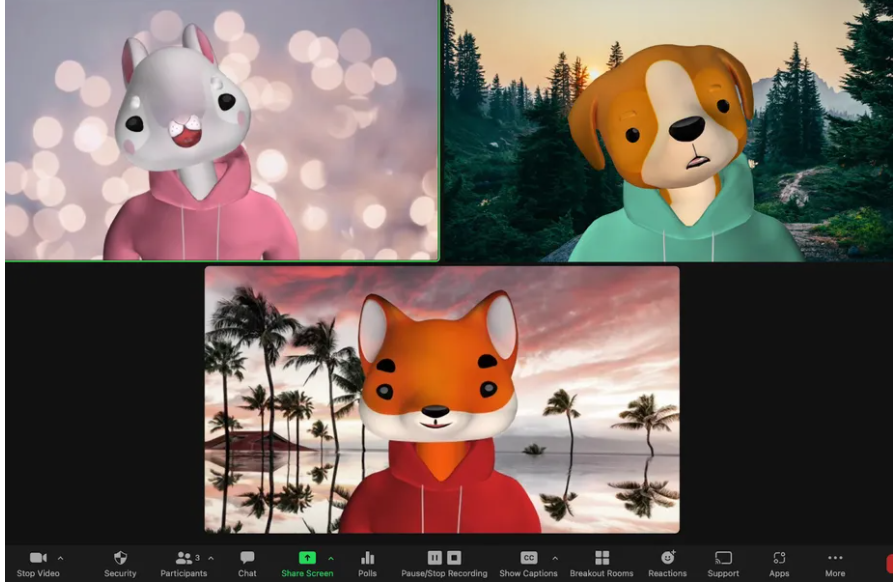 Zoom has added an avatar feature that lets you attend Zoom Meetings as a dog, a cat or other animals.

You can also show up at your next Zoom meeting as a rabbit, a horse, a unicorn, or just any animal you like.

The Video-conferencing app said its new avatar feature replaces you with a virtual character during meetings.

IT also revealed that the feature copies your expressions, Memoji-style.

Why Zoom Rolled out the Feature:

Research has shown that people get bored and tired of  constantly seeing themselves during long Zoom meetings.

For instance, a study from Stanford University proved this.

The study found that nonverbal overload may be one of the reasons videoconferences cause greater fatigue.

The study spoke of a phenomenon ‘Zoom Fatigue,’ as published by the Virtual Human Interaction Lab at Stanford University.

ALSO READ: What Is A Smart Contract?

It warned that “the mosaic of faces with whom we are closely interacting while rooted to a chair, along with the difficulty of detecting body language, with our face exposed to the scrutiny of others and our own self-evaluation on the screen, is creating additional stress.”

Also, during Zoom meetings, people are always conscious of their looks. They want to look presentable to others on the call.

This consciousness robs off on the focus and attention needed for the meetings.

Also, it affects the users’ presentation and other demands during meetings.

The study by the university said investigation revealed that “constant self-evaluation can be stressful, especially among women.”

Similarly, the author of the study, Jeremy Bailenson, cites a “study that found that female users paid a lot more attention to looking at themselves during a live video.”

Moreover, people have also raised concerns about the too much seriousness  or too official nature of Zoom meetings.

In response, Zoom has rolled out the avatar feature to tackle these concerns.

It says the new feature will help reduce the over-seriousness of Zoom meetings.

Imagine your boss showing up at zoom as a rabbit! That will bring humour to the whole process.

The video-conferencing app said in a blogpost that this feature could “bring some fun to your team-building meetings.”

Also, you won’t have to bother about your looks any more since what others are seeing is an animal that copies all your facial expressions.

Similarly, for women who are always conscious about their makeups, or taking time to makeup before meetings, this new feature indicates that you no longer need to worry about makeups before meetings.

How To Use The Zoom Avatar Feature:

Zoom said you can to turn on Avatars so you can attend meetings as an animal by doing the following:

First, click the ^ button next to the Start / Stop Video button.

Third, after tapping the Choose Video Filter, select the animal you want to show up in zoom meeting.

You have to select from the Avatars tab.

Fourth: Why not add a hood to your avatar? You can choose for your avatar to be wearing a hood or T-Shirt.

You can even decide whether your avatar will be wearing a hoodie or T-shirt.

Users can apply filters that could add mustache, ears, or even horns to your avatars.

Zoom already has filters that look like Snapchat, which allows you change your appearance by adding some features like mustache to your avatar.

Meanwhile, Zoom has said that to protect people’s data, it won’t “store any data regarding your face or facial features” if you use Avatars.

What this feature means is that people can now appear on Zoom as animals.

Also, this can help reduce fatigue or anxiety that comes with many zoom meetings.

For those who find it uncomfortable constantly gazing at bosses or others during zoom or having others gaze at you constantly, this feature will curb that.

However, some issues may arise as a result of this new feature.

Would you say a multi-billion naira contract between Tesla and say, German government, was between cats and rabbits?

Also, many employers might chase off meeting, some employees if they show up as animal avatars during meetings.

Moreover, some moderators or superiors might force others to change from animal appearance to their real appearance.

This could defeat the idea behind the feature.

But, generally, if virtual appearance and videos conferencing will become permanent aspect of our daily lives, then this feature may finally stay and widely too.

What To Expect At iCreate Skill Fest